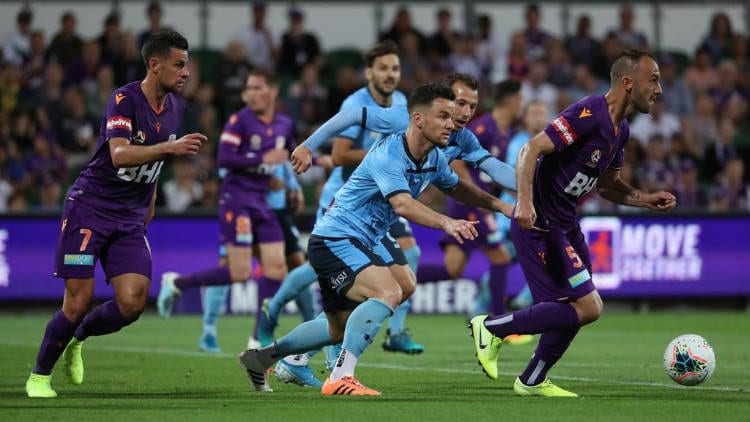 Following a weekend of shocks in the A-League elimination finals last time out, only 4 teams remain in contention for title glory. With Sydney having secured the league leaders shield and Melbourne City finishing in second place they will be ready to do battle with Perth Glory and Western United, respectively.  And with only one game between all 4 sides and a place in the A-League grand final, it promises to be another fascinating round of fixtures.

Here are our picks for the semi-finals in the A-League:

League leaders Sydney FC will be looking to put their poor finish to the season aside as they take on a resurgent Perth Glory side. Both sides will also have last year’s grand final fresh in the memory as Sydney look to call upon past glories whilst Perth Glory will be out for revenge following an indifferent regular season campaign.

Serial winners Sydney FC will be looking to make it back to back A-League titles, but their form needs to improve following a real post-lockdown blip.

Despite some poor showings since the restart, Sydney FC won the league by 6 points from Melbourne City and were the team to beat all campaign.

Adam Le Fondre is a natural born goal scorer and he will be eager to add to his tally of 20 goals this term, in what is a crucial game for the club.

In comparison to their league leaders shield winning season last year, it has been a subdued campaign for Perth Glory who finished 6th.

Nine defeats from 26 games is uncharacteristic by their high standards but they have plenty of firepower at their disposal but their win over Wellington Phoenix last time out was a real exhibition in defensive shape.

Bruno Fornaroli is one of the A-League’s most experienced strikers and he will be hoping to improve on his 13 goals this term.

Perth Glory are one of the cagiest sides in the division and with Sydney in relatively poor form, this could be a tight encounter.

Former Premier League striker Adam Le Fondre is proven at this level and he tends to turn up in the big games for Sydney.

This is a huge game for both sides, and it could well be an attritional encounter.

Two sides looking to break new ground face off in the second semi-final as Melbourne City take on Western United. City have been knocking on the door for a few seasons without getting over the line, but their 2nd place regular season finish suggests they are ready to challenge Sydney FC. For debutants Western United this is a real opportunity and they have shown resolve all season in their first year as a franchise and have finished the campaign strongly.

There is a sense of expectation around 2nd placed Melbourne City, who finally look to have the tools to go all the way in the A League.

They finished the season in second place, six points behind Sydney FC but the consistency demonstrated throughout the campaign was a clear sign of progress.

Jamie Maclaren leads the way on the scoring chart for Melbourne City with 22 goals and his clinical finishing could prove invaluable here.

Few would have expected Western United to finish in 5th place this season but with 12 wins from their 26 games, they have been consistent this term.

They picked up 39 points from their 26 fixtures scoring 46 goals in the process – the third highest tally in the league and their win over Brisbane Roar in the elimination finals was a real step in the right direction.

Besart Berisha is the main man for United and his 19 goals in 26 games have been integral to their success so far this term.

This could be a highly entertaining game between two sides that focus on attacking primarily.

Jamie Maclaren tops the A-League scoring charts and very few would bet against him netting again here for Melbourne City.

Neither side will want to leave anything out there and this could be a real tight encounter.