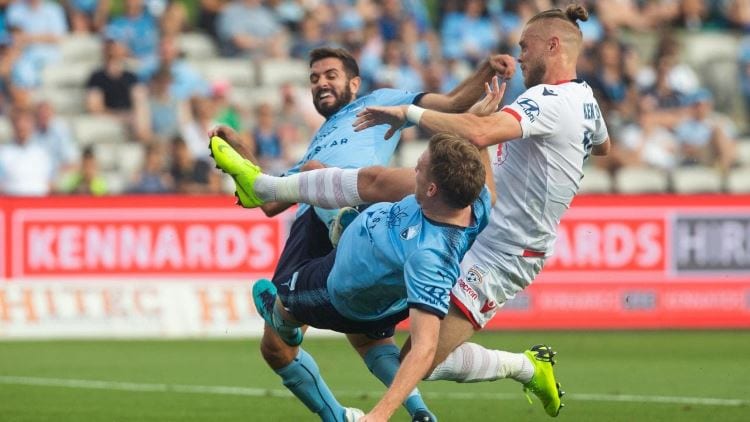 Goals were very much on the agenda in week 13 of the A-League with at least 3 scored in each fixture, making it an enthralling weekend of football. Sydney FC continued their march to the Premier title with a hard fought win over Adelaide United whilst Melbourne City kept pace with an entertaining win over Western United. Elsewhere, Newcastle Jets’ problems continued with a 4-0 thumping at Melbourne Victory whilst fellow strugglers Brisbane Roar picked up an impressive win on the road at WSW and Wellington Phoenix edged past Central Coast Mariners.

Here are our picks for the 14th round of fixtures in the A-League:

Top travels to bottom in the A-League as Sydney FC take on Newcastle Jets at the McDonald Jones Stadium. The Jets sit bottom of the table with 11 games played and their recent form both home and away has been a real concern. Defensively they have been all at sea in recent weeks and their 4-0 thumping at Melbourne Victory last time out was particularly chastening. League leaders Sydney are sitting pretty at the top of the A-League and the gap to the chasing pack is 9 points. As defending champions, they know what it takes to get over the line and they are a side full of confidence currently and they will want to extend their unbeaten run. They look overpriced on the road here and should pick up a comfortable win at Newcastle Jets here.

High-flying Wellington Phoenix host WSW in what looks an entertaining game on paper. Phoenix have developed into one of the most competent sides in the division and wins in their last two games has propelled them up to 4th position in the A-League table. Meanwhile, WSW started the season superbly but have slipped down to 8th following a poor run of form. They were beaten at home by Brisbane Roar last time out which was a hugely disappointing result for all connected with the club and they will be eager to see a response here. Wellington Phoenix are a side in good form and they should come through this one with 3 points in the bag.

Betting tip: Wellington Phoenix to win the match and both teams to score ($3.65) Bet Now

2nd placed Melbourne City travel to Brisbane Roar with both sides buoyant after wins last time out. Robbie Fowler’s Brisbane Roar have climbed up to 9th in the A-League table following their excellent win on the road at WSW last time out. They have only won two of their last 6 A-League games however and they will be hoping their win time out could be a launch pad going forward. Melbourne City returned to winning ways in impressive fashion last time out with an entertaining win over Western United and they will be looking for more of the same here. The sky blues sit 2nd following an impressive run but they will be eager to begin closing the gap on Sydney FC above them. Brisbane will trouble Melbourne City but the blues should come through and win this one.

Defending league shield winners Perth Glory will be looking to keep their improved form going as they host Adelaide United. Glory struggled in the opening weeks of the season but 4 wins on the spin have propelled them up to 3rd in the table and they will be eager to hunt down the likes of Sydney FC and Melbourne City above them come the end of the campaign. Adelaide meanwhile will be looking to bounce back from their tight defeat on the road at Sydney FC last time out. They have dropped to 6th place in the table following three losses on the spin and they will want to address the slide as quickly as possible. Perth Glory however should have too much at home and look set to pick up three points.

Melbourne Victory will be keen to continue their improved results as they travel to take on Central Coast Mariners. Central Coast sit 10th in the table with 2 wins in their last 6 games and consistency looks to be the key issue for them as they look to avoid the wooden spoon this season. Melbourne Victory meanwhile will be looking to improve on their league standing of 7th as swiftly as possible and the manner of their 4-0 thumping over Newcastle Jets was an indicator that they are starting to click. They have taken 7 points from their last 3 matches and they will be hoping to climb up the table and make the play-off places come the end of the season. Central Coast should trouble Melbourne Victory but this is a game Victory should win.

Betting tip: Melbourne Victory to win the match and both teams to score ($3.15) Bet Now