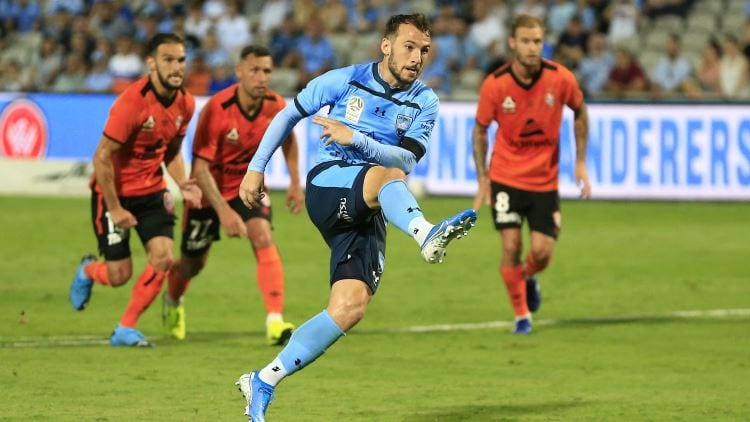 Sydney FC continue to set the pace at the top of the A-League following their gritty 1-0 win over Brisbane Roar last weekend. Melbourne City and Perth Glory dropped more points in pursuit of Sydney, against Adelaide United and Melbourne Victory respectively whilst Newcastle Jets halted their losing streak with a hard-earned draw at home to Western United. Meanwhile, WSW got back to winning ways too with an impressive display at Central Coast Mariners.

Here are our picks for the 18th round of fixtures in the A-League:

A Melbourne Derby kicks off the program for game week 18 and it promises to be yet another classic at AAMI Park. Melbourne City sit 2nd in the A-League table but continue to slip off the pace and now have a 13-point deficit to make up on Sydney FC. They suffered a punishing defeat to Adelaide United last time out and have only managed to win 2 of their last 5 league games, form that needs to be improved upon with the play-offs looming. City rivals Melbourne Victory meanwhile find themselves floundering in 9th place in the A-League table and the problems look to be mounting up. They picked up a reputable point on the road at Perth Glory last weekend, but they need to find form quickly if they are to have any chance of making the play-offs come the end of the season. This should be a classic in Melbourne which City should just about prevail from.

Perth Glory host Wellington Phoenix in what promises to be a real battle between two sides chasing a top 6 finish this term. Defending league shield winners Perth Glory have been in excellent form of late and are unbeaten in their last 7 league fixtures. Their home draw with Melbourne Victory last weekend will be a disappointment and they will be eager to bounce back here. They sit 3rd in the table and look to be coming into form at the right time with play-off places up for grabs. Wellington Phoenix meanwhile sit in 4th, one place and two points behind Glory going into this one. They will be hoping to benefit from their rest week last time out and they too are in fine form with 4 wins from their last 5 fixtures. This will be a very tight encounter in Perth, and it could well end up honours even.

A Sydney Derby gets the Saturday A-League program underway with runaway leaders Sydney FC eager not to slip up in their title bid. Their procession to the title continued last weekend as they beat Brisbane Roar and they sit 13 points clear of the chasing pack at the top of the league as a result. They have won their last 5 league games and look to be in fine form currently. Meanwhile, WSW bounced back from a rest week last weekend as they put in one of their best performances of the season to win at Central Coast Mariners. They find themselves 8th in the table and they will be looking to make life as difficult as possible for Sydney FC here. The blues however are in great form and they should have no issues in picking up all three points here.

Betting tip: Sydney FC to win the match and both teams to score ($2.4) Bet Now

Two sides chasing a play-off finish face off in Brisbane as Adelaide United are the visitors to the Suncorp Stadium. Brisbane Roar have climbed up to 7th in the A-League table with two wins from their last 3 league fixtures and they were deemed by many to be rather unlucky in defeat at Sydney FC last time out. They have only lost one of their last six league games and they will make this tough for Adelaide here. Adelaide will be looking to build on their wins over both Melbourne sides and Western United in their last 3 games, results that have seen them climb up to 5th place in the table. The play-offs look a realistic calling for United and they will be hoping to put Brisbane under pressure from the outset here. This could be a very tight game and the points could well be shared in Brisbane.

A classic basement battle looks on the cards at the McDonald Jones Stadium as Newcastle Jets welcome Central Coast Mariners to town. The Jets sit bottom of the table with 15 games played and their recent form both home and away has been a real concern. They have only picked up one point from their last 5 league fixtures but the manner of their draw with Western United last weekend could be the catalyst for improvement. Central Coast Mariners sit 10th in the table, 3 points above Newcastle and they will be looking to bounce back from a poor home defeat to WSW last time out. Both sides are low on confidence and this could be an edgy encounter with a draw looking the most likely result.