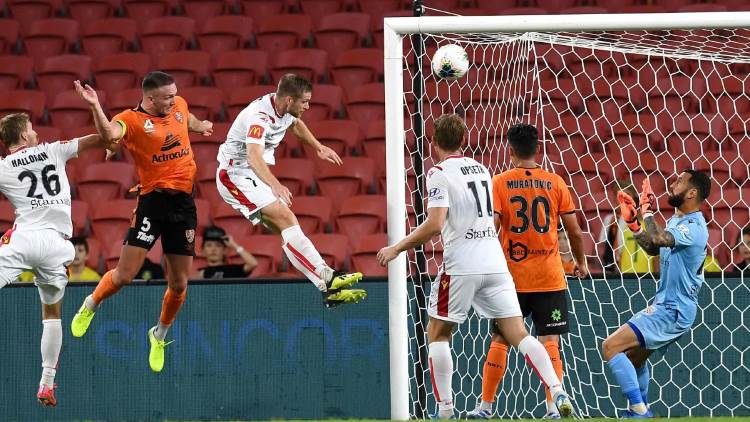 The first postponed game for 5 years hit the A-League last weekend as the Sydney Derby fell afoul of some much-needed rainfall in New South Wales. Elsewhere, Melbourne Victory took the points in the Melbourne Derby whilst Perth Glory got the better of Wellington Phoenix in a fiery encounter on the West Coast. Brisbane Roar’s excellent recent form continued with an excellent home win over Adelaide United whilst Newcastle overcame Central Coast in a 7-goal thriller at the bottom of the table.

Here are our picks for the 19th round of fixtures in the A-League:

Adelaide United will be looking to bounce back from a poor result on the road at Brisbane Roar as they host Central Coast Mariners. Prior to their defeat last weekend, United had picked up impressive wins over both Melbourne sides and Western United in a run that saw them climb up to 5th place in the table. The play-offs look a realistic calling for United and they will be hoping to put Central Coast under pressure from the outset here. Central Coast Mariners meanwhile sit 10th in the table following their hear-breaking 4-3 defeat at Newcastle Jets last time out.  They are level on points with the Jets at the bottom of the table and they will be desperate to start picking up points quickly as they look to pull away from wooden spoon contention this term. Central Coast always tend to carry a goal threat and could pressurise Adelaide but United should have too much about them at home here.

Betting tip: Adelaide United to win the match and both teams to score ($2.25) Bet Now

Two sides with genuine play-off aspirations face off in Wellington in what promises to be a fascinating encounter. Wellington Phoenix sit in 4th, six points behind Melbourne City going into this one and they will see this as the perfect opportunity to close the gap. They were well beaten on the road at Perth Glory last time out and they will be eager to return to familiar surroundings for this one. Melbourne City meanwhile sit 2nd in the A-League table and they should be full of confidence after their win over Melbourne Victory last time out. Catching Sydney FC at the top of the table looks an ambitious task but they will be hoping to keep picking up points and finish as high as they can in the table with the play-offs looming at the end of the campaign. This will be a very tight encounter in Wellington, and it could well end up honours even.

WSW welcome Newcastle Jets to the Bankwest Stadium in what promises to be a huge game for both sdies. WSW picked up an excellent win at Central Coast Mariners in their last game before succumbing to the weather against Sydney FC last weekend. They find themselves 8th in the table and they will be looking to make sure they keep their gap between themselves and the chasing pack here. Newcastle Jets meanwhile sit bottom of the table with 16 games played but the manner of their win over relegation rivals Central Coast Mariners is sure to give them a boost as they look to climb away from bottom spot. It was their first win in 9 A-League games, and they will be hoping to build upon that here. This should be a tight game that could well end up honours even.

Western United will be eager to get back to winning ways as they welcome in-from Brisbane Roar to the GMHBA. A poor run of form has left Western United outside of the play-off places currently, one place and one point behind Brisbane Roar. With only one win in their last 5 matches, they will be desperate to take advantage of playing at home here. Brisbane Roar meanwhile have climbed up to 6th in the A-League table with three wins from their last 4 league fixtures. The manner of their win over Adelaide last time out will be hugely encouraging for all associated with the club and they will believe that they can sustain a genuine play-off push this term. This should be an excellent game between two sides that play good football and the points look set to be shared here.