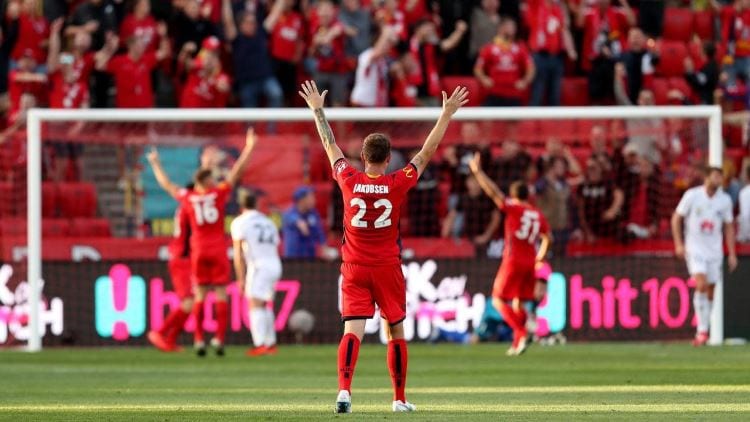 Yet another packed weekend of A-League fixtures are on the cards as the race to finish in the top 6 places in the league hots up. Perth Glory cemented their place at the top of the table last time out with a 3-0 win at Central Coast whilst Sydney and Melbourne City picked up crucial wins over Melbourne Victory and Brisbane Roar respectively.

With the end of the season approaching its all to play for in the A-League and it promises to be a fascinating round of fixtures.

Here are our picks for the 25th round of fixtures in the A-League:

Friday night kicks off with an intriguing fixture between Brisbane Roar and Wellington Phoenix. Brisbane are currently sat in 9th position in the table – 5 points behind the teams above them and have lost 5 of their 6 matches. Wellington Phoenix meanwhile saw their three game winning streak come to an end at Adelaide last time out and they will be looking to bounce back here as they hope to hang on to 4th place in the A-League standings.  Brisbane are a side in free fall and Wellington will want to make them pay and could pick up an important win on the road here.

Two sides wrapped up in the top six battle face off in Melbourne as Adelaide come to AAMI Park. Melbourne City got back to winning ways with an impressive home win over Brisbane Roar last time out although their inconsistencies are currently preventing them from improving on their 6th place standing.. Adelaide sit a point above City and have won their last 2 games to push themselves up to 5th in what is becoming a congested league table. This promises to be a very close game between two well matched sides and it could well end up as a draw.

A Sydney derby looks set to light up the A League on Saturday evening as Sydney FC travel across town to take on WSW. The Wanderers have only lost two of their last 7 games but their painful defeat to Newcastle Jets last time out has the look of a killer blow in terms of their outside chances of reaching the playoffs. Sydney sit 2nd in the table and produced a magnificent performance to beat Melbourne Victory last time out 2-1 to cement their place in 2nd place. Derby games are always difficult to call but Sydney FC tend to come into their own at this point in the season and could pick up a big win here.

Melbourne Victory will be looking to bounce back from their defeat to Sydney as they take on Central Coast Mariners. Melbourne Victory have struggled of late, winning only two of their last 7 matches and they will be hoping to get back to winning ways here.  With only 2 wins this term, Central Coast could be the perfect side for Melbourne to have to face and their 3-0 defeat at the hands of Perth Glory last time out was indicative of how unsuccessful their season has been. This should be a comfortable home win for Melbourne Victory.

Perth Glory got back to winning ways last time out with a comfortable win on the road at Central Coast and they will be keen to keep their good run going against Newcastle Jets. They have a six point lead on the chasing pack and will be eager to extend that in front of their home fans here. Newcastle Jets have improved significantly in recent weeks, losing only twice in their last 8 games and their gutsy 3-2 win over WSW was an indicator that they are looking to finish the season strongly. Newcastle won’t make this easy for Perth but the Glory are in good form and should win this one at home.

Betting tip: Perth Glory to win the match and both teams to score ($2.2) – Bet Now