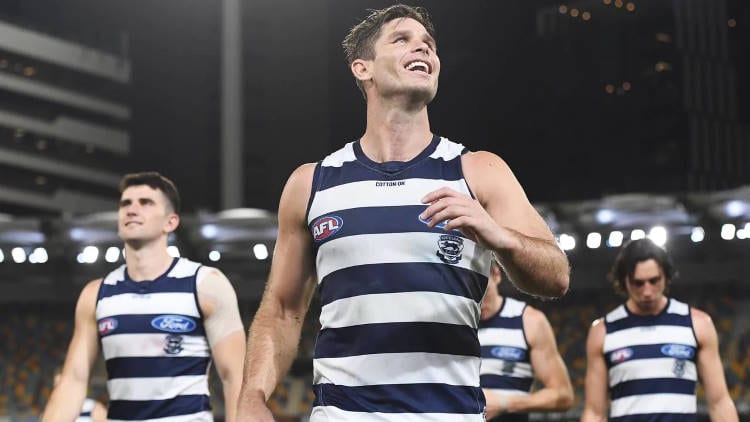 Round 12 of the AFL starts on Thursday with the Swans vs. Giants and teams are getting desperate as the playoffs approach.

There are some big games this week, including Cats vs. Power, Demons vs. Magpies, and Saints vs. Bombers.

We have expert betting tips for every AFL game in Round 12.

Two teams coming off a bye in Round 11 play on Thursday night as the Swans take on the Giants.

Sydney is coming off a tough loss to the Collingwood Magpies, where they scored the same amount of goals but the difference was the behinds.

The Giants are coming off a win but it was a tough outing. They scored a 59-55 win over Essendon last week and although it was tight, they should derive good confidence from the win.

It comes as no surprise to see the Giants head the betting and they should do the job in an important contest.

The Cats are coming off a powerful win over the Saints on Monday and although they have to back up a few days later, they are in good shape.

Geelong won by 93-34 and they put the pressure on throughout the second half. It holds them in good stead against a Port Adelaide side that handled Richmond last Saturday.

The Power have been excellent for most of the season and bookmakers have installed them as the early favourites.

There is good value with the Cats, however, so take the odds on offer.

North Melbourne are struggling at the moment and that was evident by their 92-35 loss to Melbourne on Sunday.

They will need to find an offensive explosion against a Brisbane Lions outfit which turned it on against the Western Bulldogs last Saturday.

The 96-72 performance was much-needed for the Lions, whose confidence had dipped over the past few weeks.

Bookmakers have 29.5 points between the sides and if the weather plays its part, the Lions should cover comfortably.

It was hard not to be impressed with the Demons performance against North Melbourne last week and that confidence will do them plenty of good.

The 92-35 win was a shot in the arm for a Melbourne side that had been putting in some indifference displays over the past few rounds.

Collingwood will be a good test for the Demons, who have had more time to recover after playing on Sunday, as opposed to Tuesday for the Magpies.

We are going with the Demons in what should be a close contest.

Fremantle played on Monday and although it was a low scoring game, they came away with the chocolates.

The 48-32 win came after scoring only seven goals but they limited the Hawthorn Hawks to only four goals. It was a solid defensive display and it should hold them in good stead against the Blues.

Carlton currently holds favouritism with bookmakers despite a loss to the West Coast Eagles. The 72-50 effort wasn’t overly inspiring and although the opposition is easier on Saturday, we’re not sure that they should be favourites.

We are going with Fremantle at better than even money. The $2.08 is well worth taking while it lasts.

There hasn’t been much to get excited about for Adelaide fans this season and the pain could continue in Round 12.

The Crows are struggling in all facets of the game and the Western Bulldogs could take advantage of that this Sunday.

The Bulldogs are coming off a 96-72 defeat at the hands of the Brisbane Lions but the level of opposition takes a significant dive here.

Adelaide isn’t proving to be worthy of being in the competition this season and the Bulldogs should handle them with ease.

Saint Kilda ran into a juggernaut on Tuesday when losing to the Geelong Cats 93-34. It was a one-sided display but the Saints can rebound back into form.

Despite their season being inconsistent, the Saints have the ability to record quality wins over quality opponents, such as the Bombers.

Essendon will be coming off a tough game against the Gold Coast Suns and they should be well-prepared for this game.

Confidence is a little low for Essendon right now, so a big end to the season is needed. If they can beat the Suns on Wednesday, expect that momentum to carry forward.

The West Coast Eagles exerted their dominance when beating Carlton last week and they are firm favourites to beat Hawthorn.

The Hawks suffered another loss at the hands of Fremantle and that’s hardly good form coming into this contest.

Punters weren’t shocked when the odds came out with West Coast paying $1.13 to win. The odds are short, but they could boost AFL multi bet payouts.

Richmond will be eager to bounce back after suffering a defeat at the hands of the Port Adelaide Power.

The 93-72 loss would have stung this proud team but they often bounce back nicely from a defeat and the Suns don’t always pose a threat.

Gold Coast have improved significantly this season but they are not on the same level as Richmond and that should be evident on Monday.

Our top rated and recommended bookmaker for round 12 of the AFL season is Sportsbet – JOIN HERE.
Other top rated bookmakers for AFL Round 12 include BetEasy, PlayUp, and SportsBetting.

To find out our best bets for Round 12 of the AFL season, read our full round 12 preview and betting tips!

Read our AFL Round 12 preview and bettings tips to find out all of the fixtures and locations for the round!