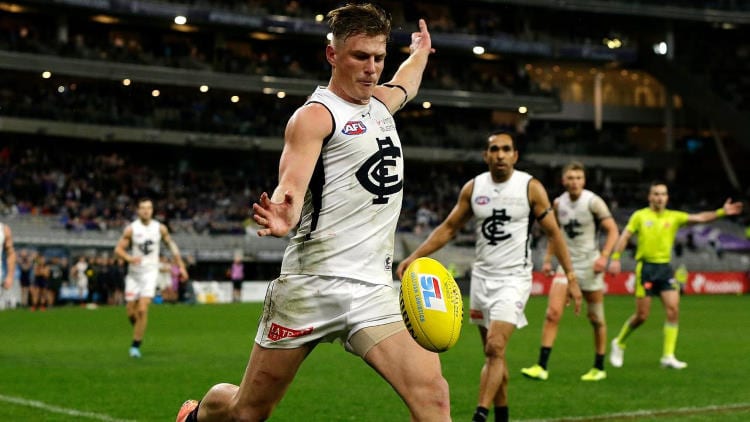 Round 13 of the AFL starts on Friday with the Suns vs. Carlton and we have expert betting tips for all nine AFL Round 13 games.

The action continues with quality games this week, including Eagles vs. Giants, Bombers vs. Tigers, and Bulldogs vs. Demons.

The Gold Coast Suns looked good at the start of the season but they are beginning to struggle with consistency.

Looking to take advantage of that are the Carlton Blues, who are slight favourites to win this game. Carlton is coming off a win over Fremantle, which was decided by only four points.

The win will do Carlton plenty of good and although a close market has been framed, we’re expecting Carlton to come away with a good victory.

The Bulldogs and Melbourne are coming off impressive Round 12 wins and this game is shaping up to be a thriller.

Melbourne scored a 100-44 win over the Collingwood Magpies, where they scored 16 goals and limited the Magpies to only six.

It was a comprehensive win and one that was a long time coming for Melbourne, who have promised so much over the last few years.

The Bulldogs won 111-54 over Adelaide and it was one-sided from the outset. Adelaide are showing little this season, so it’s hard to get a guide on how strong the performance was.

Stick with Melbourne in what should be a great game.

Port Adelaide suffered a rare loss to the Geelong Cats last week and they will need to bounce back to get the confidence levels back up.

In their favour this week is their matchup against Hawthorn, who haven’t been playing well during the middle stages of the season.

The Hawks are coming off an 81-49 loss to the West Coast Eagles and the opposition doesn’t get any easier this week.

Bookmakers have the Power as 27.5-point favourites and they could bounce back in fine style.

Essendon couldn’t cope with the quick back-up last week when losing to St Kilda by 35 points.

A win would have seen them push for a top eight spot, but instead they now need to battle against teams like the Richmond Tigers.

The Tigers haven’t been at their best over the last few weeks, but there were good signs when losing to Port Adelaide in Round 11.

This is another game where bookmakers have the Tigers as firm favourites but there is 27.5 points between them. That is a big margin to cover against a capable team like the Bombers.

The Dockers only narrowly suffered defeat at the hands of the Blues last week and they are capable of turning that result around.

Fremantle is a team that typically attracts attention in the market and that is the case this week. They are the $1.75 favourites to beat Sydney, despite the Swans coming off their best 2020 performance.

Sydney won 66-25 against the Giants last Thursday and a victory like that has to give them supreme confidence.

We are happy to take the $2 for a team coming off a confidence-boosting win.

Two teams going in opposite directions do battle on Sunday as the Crows square off against the Cats.

Adelaide are the whipping boys of the 2020 AFL competition and they are coming off another heavy defeat at the hands of the Western Bulldogs.

Geelong is coming off a season-best performance over Port Adelaide and another comfortable victory is on the cards this week.

They will need to cover 35.5 points for punters but the Cats could win by 60 with the way the Crows are travelling.

Brisbane comes through a nail-biting victory over the North Melbourne Kangaroos and that should give them confidence against the Saints.

It was a one-point victory for the Lions, who needed the win to stay in touch with the AFL leaders. They could now post another win over the Saints, who dismantled the Bombers last week.

St Kilda won 68-33 over Essendon and they are playing well enough to beat Brisbane. However, playing the Lions at the Gabba isn’t easy and they could struggle.

Take the Lions in the head-to-head market for safety.

The Giants are coming off a perplexing loss to the Sydney Swans where they were downed by 41 points.

They should have been better prepared for that game, given that they had the bye in Round 11. However, they came out very flat and it is a concern this week.

West Coast had no such concerns when beating the Hawks by 32 points last Sunday. It was a solid victory and we are not surprised with the odds for this game.

Bookmakers have the Eagles as $1.33 favourites and that’s where we framed this game. The Giants could struggle to rebound from the heavy defeat to the Swans.

Collingwood needs to shake off a 100-44 loss to the Melbourne Demons and they have the ability to do so.

The Magpies are a team with good potential this season and despite the poor loss, they are well-favoured to beat North Melbourne.

The Kangaroos were one-point shy of the Brisbane Lions last week, so they should take plenty of confidence from that outing.

We don’t think there is 15.5 points between these sides, so we will take the Kangaroos with the head start.

Our top rated and recommended bookmaker for round 13 of the AFL season is Sportsbet – JOIN HERE.
Other top rated bookmakers for AFL Round 13 include BetEasy, PlayUp, and SportsBetting.

To find out our best bets for Round 13 of the AFL season, read our full round 13 preview and betting tips!

Read our AFL Round 13 preview and bettings tips to find out all of the fixtures and locations for the round!