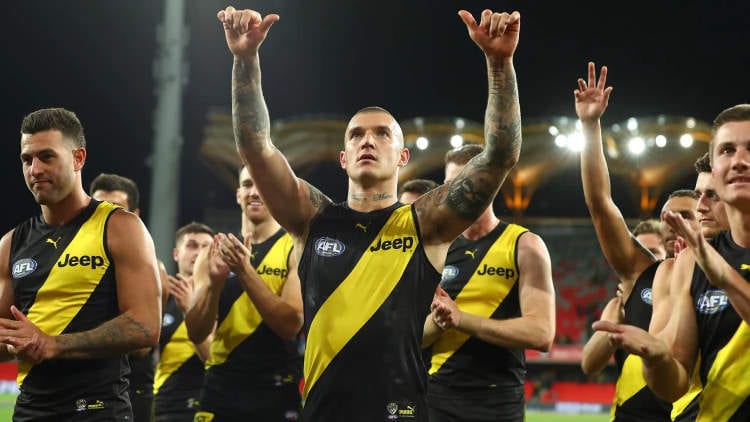 Round 18 of the AFL starts on Thursday with North Melbourne vs. West Coast Eagles, and we have expert betting tips for every game this week.

There are nine games to get excited about in Round 18 and we look at the form of all 18 teams in action.

It is the last week of the regular season, so it’s all on the line for looking to get into playoffs, and for the teams wanting to improve their position.

The West Coast Eagles looked good winning last Thursday night, and they have had a full seven days to prepare for this contest.

They scored a 65-50 win over St Kilda, and given the poor form of the North Melbourne Kangaroos, it shouldn’t a tough game.

Bookmakers have 36.5 points between the two teams, and although that’s hard to cover, West Coast should go close.

St Kilda couldn’t get past West Coast last week, but they come up against a GWS team that is down on confidence.

The Giants haven’t been able to produce their best form this season, and the Saints could capitalise on that this week.

St Kilda needs a win to assure themselves of a playoff spot, whereas the Giants need to win to have a chance of making the playoffs.

We are going with St Kilda to come out ahead in what should be a close contest.

It has all gone wrong for Essendon over the last few weeks and they come into the game on the back of a 79-29 loss to Port Adelaide.

It was hard for Bombers’ fans to watch and they could notch another loss in Round 18, as Melbourne looked good against the Giants.

Bookmakers have Melbourne as the short favourites and they should get the job done for punters.

The Crows have found winning form towards the end of the season, but it could come to an end in Round 18.

Adelaide has looked good over the last three weeks, and credit to them for fighting back. However, Richmond isn’t a team that loses to the likes of Adelaide, especially under these circumstances.

Richmond is coming off an impressive win over Geelong, where their defense was strong. The Crows will do well to keep within 20 points this week.

Brisbane continued their good season with a win over the Sydney Swans last week, and it should continue in Round 18.

The Lions won 73-41 after scoring 11 goals, and Carlton is coming off a loss to the worst team in the AFL this season.

Carlton can be tough to beat on any given day, but we fancy Brisbane to get the job done with ease on Saturday night.

There isn’t much to play for except pride in this game, but punters could get value. The Hawks didn’t fire against the Western Bulldogs last week, losing by 36 points.

Gold Coast couldn’t keep up with the Collingwood Magpies, but they looked the better than Hawthorn.

The Suns scored only six goals but had 10 behinds. If they were more accurate, they could have pushed the Magpies close.

We fancy Gold Coast in this matchup, as the Hawks look like a beaten side.

Geelong gets a good chance to rebound following their loss to the Tigers. They didn’t play too poorly in the loss, and the Swans could be in for a long night.

Sydney didn’t do much to get excited about last week when losing 73-41 to the Lions. They scored only six goals, which won’t be enough against Geelong.

This game is all about the Cats, and ensuring they have momentum heading into the playoffs.

The Bulldogs looked solid when beating Hawthorn and scoring 11 goals in the process. It bodes well for a good showing against a gritty Fremantle team in Round 18.

Fremantle dismantled the Kangaroos last week, scoring a 99-35 win. It was a one-sided display from the outset and they could test this Bulldogs side.

Bookmakers have Fremantle as $2.81 underdogs, and that’s where the value lies.

Collingwood did what they needed to do against Gold Coast last Monday, but Port Adelaide will be a much harder test.

The Power are one of the form teams in the competition, following their 50-point win over the Essendon Bombers.

We are expecting a much closer game this week, but we have the Power winning narrowly.

Our top rated and recommended bookmaker for round 18 of the AFL season is Sportsbet – JOIN HERE.
Other top rated bookmakers for AFL Round 18 include BetEasy, PlayUp, and SportsBetting.

To find out our best bets for Round 18 of the AFL season, read our full round 18 preview and betting tips!

Read our AFL Round 18 preview and bettings tips to find out all of the fixtures and locations for the round!