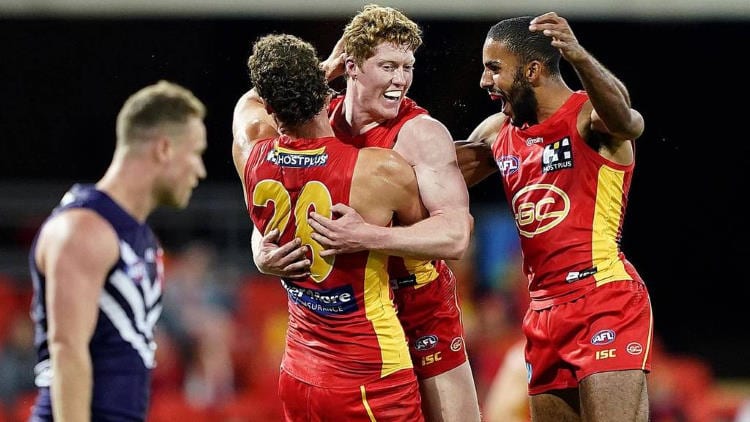 AFL action continues this week and there are some exciting games on the schedule. Collingwood vs. Essendon and Brisbane vs. Port Adelaide headlines the card.

We have expert betting tips for all nine AFL Round 5 games this week.

St Kilda is coming off a tidy effort against the Richmond Tigers and that momentum could carry forward to this week.

The Saints were strong in handing the Tigers their second straight loss, winning 93-67, and scoring 15 goals.

Carlton just got the win over Essendon but this game could prove too tough for them on Thursday night.

Essendon have had a tough couple of weeks and it’s not about to get any easier against Collingwood.

The Bombers lost to the Blues by one point last week but that was a game they probably should have won.

Collingwood is coming off a two-point loss to the Giants and they will be out for redemption this week. The Magpies had looked good prior and we’re expecting an improved effort.

It was more suffering for the West Coast Eagles last week, losing to the Port Adelaide Power by 48 points.

The Eagles can’t seem to get going in 2020 and the Swans are in the same category following a 67-39 loss to the Western Bulldogs.

It is tough to split these teams but the Eagles shouldn’t be far off finding form and the Swans are easier than the Power.

The Cats did what they needed to do against Melbourne, but it wasn’t a convincing effort.

Geelong scored a 47-44 win over the Demons but they’re about to face a resurgent Gold Coast Suns side that is riding a winning streak.

The Suns extended their winning streak over the Dockers last week and we give them an outside chance of winning this game.

Take the Suns with the points as they are a confident outfit.

The Bulldogs have had the benefit of over a week’s rest and that could pay dividends this week.

They are coming off a win over the Sydney Swans and there is good early betting support coming their way.

North Melbourne lost to Hawthorn but they made a late comeback to bridge the gap to four points. It was an inconsistent effort but it’s clear that the ability is there.

We are leaning the Bulldogs in a tight contest.

A cracker of a game as two in-form teams do battle at The Gabba. The Lions are coming off a win over the Adelaide Crows where they scored 10 goals and an incredible 23 behinds.

A more polished effort will be needed against the Power, who scored 13 goals when beating West Coast by 48 points.

Brisbane plays well at home but we are giving the edge to the Power. It could be their season and we like the way they are travelling.

There isn’t much to get excited about for Adelaide fans this season. They lost again to the Lions last week and scoring only 46 points isn’t going to cut it.

Fremantle can get back to winning form after suffering defeat at the hands of the Suns. They should find this game easier and bookmakers are offering good odds.

Melbourne pushed the Geelong Cats to within three points last week and that should give them confidence heading into this game.

Richmond suffered yet another loss to St Kilda and they aren’t showing the same form in 2020 compared to the last few years.

It is tough to pick a winner between these two teams but the Demons might pull off a minor upset at home.

The Giants got a much-needed win over the Magpies last week and they should look to build on that effort.

They held on for the two-point victory but they face a Hawthorn team with a bit of momentum following consecutive wins.

It has been a good turnaround since the loss to Geelong. Wins over Richmond and North Melbourne hold them in good stead for this game, but we’re going with the Giants at home.

🤑 Who should you bet with for AFL Round 5?

Our top rated and recommended bookmaker for round 5 of the AFL season is Sportsbet – JOIN HERE.
Other top rated bookmakers for AFL Round 5 include BetEasy, PlayUp, and SportsBetting.

To find out our best bets for Round 5 of the AFL season, read our full round 5 preview and betting tips!

📺 How can I watch Round 5 of the AFL season?

🏉 What is the fixture for AFL Round 5?

Read our AFL Round 5 preview and bettings tips to find out all of the fixtures and locations for the round!