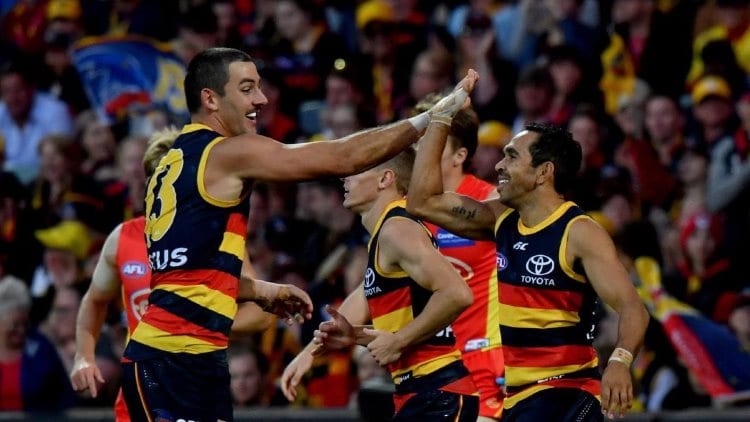 AFL Round 6 kicks off early this week with the Wednesday night feature between the Tigers and Demons.

That means punters get AFL tips for Wednesday, Thursday, Friday, Saturday and Sunday this week. It’s a great week in the AFL and we have free expert tips for every game.

The Tigers are coming off a solid 89-67 win over the Sydney Swans last week and they look a good chance of scoring another win this week.

That’s more because they’re playing the Melbourne Demons, who mustered only 55 points in defeat to the St Kilda Saints.

For a team that was tipped to finish in the first four during the regular season, the Demons are playing like a wooden spoon team. Something will need to change shortly, otherwise they’re going to fall right out of contention.

Both the Bombers and Magpies are coming off impressive Round 5 wins and it should make for a thrilling Thursday night AFL contest.

Bookmakers have framed a close market and that’s hardly surprising. Essendon scored a 116-58 win over the Kangaroos last week and the Magpies were 123-61 winners over the Lions in Brisbane.

We’re giving the slight edge, based on those performances, to the Magpies and so are bookmakers. We’re not ruling out the Bombers, but Collingwood has been the more consistent team to date and they have class on their side.

More was expected from the Kangaroos last week but they came up with only 58 points against Essendon and gave up 116.

It’s not about to get any easier this week as they face the Port Adelaide Power, which is coming off a tidy 95-53 win away from home.

The Power playing at home are much harder to beat and we’re predicting a relatively easy win for the home side this week.

The Suns and the Lions are coming off dismal performances last week, but at least one of these teams will get back in the winners’ list.

Brisbane were 123-61 losers to the Magpies and the Suns scored only 46 points against Adelaide, who scored 119.

Both teams will be desperate to get over those shocking losses and come out with more excitement this week. Prior to last week, the Lions looked the much better side and we’re going to have to go on previous form.

The Saints came marching in last week when dispatching the Melbourne Demons 95-55. It was a dominant display from the underachieving team and that momentum could continue through to Round 6.

Adelaide were also impressive 119-46 winners over the Gold Coast Suns but the Crows have been relatively poor this season and playing away from home is never a happy hunting ground.

Bookmakers have installed the Saints as favourites, which was a little surprising, but it shows how these two teams could be headed in different directions this season.

The Swans and Giants are needing to rebound here after both suffered losses last week. Sydney lost 89-67 to the Tigers and the Giants lost 106-82 to the Dockers.

Prior to last week, the Giants had looked the better team and we’re expecting a quick bounce-back performance from GWS this week.

The head-to-head line is a touch closer than expected, with the Giants paying $1.50. We’re happy to take the Giants having to cover the points spread.

The tide may have turned for the Fremantle Dockers last week when winning 106-82 over the GWS Giants and we’re not surprised to see bookmakers list them as the favourites.

The Bulldogs, on the other hand, looked awful when scoring only 57 points to Carlton. That’s never a good thing – to lose to Carlton, especially by such a big margin.

It doesn’t bode well for the Bulldogs and we’re expecting Fremantle to continue with their momentum.

The Hawks were beaten on Monday night by the Geelong Cats, but they weren’t disgraced. The 113-90 loss was a solid performance and playing another game at home should help this week.

Standing in their way of a bounce-back performance are the Carlton Blues, which produced a 101-57 win over the Western Bulldogs last week.

It’s tough to line up that performance as the Bulldogs offered very little in return, but it was a solid win.

Hawks should be eyeing this game as a must-win.

The Cats looked strong when winning on Easter Monday over the Hawks and they now welcome last year’s winners into town.

Geelong scored a 113-90 win over the Hawks and it was a strong performance from a team that could go all the way this season.

The Eagles are looking to bounce back after losing 95-53 to the Power last week and we’re surprised that bookmakers have this game so close. That could be out of respect for the Eagles, who still possess the potential to win.