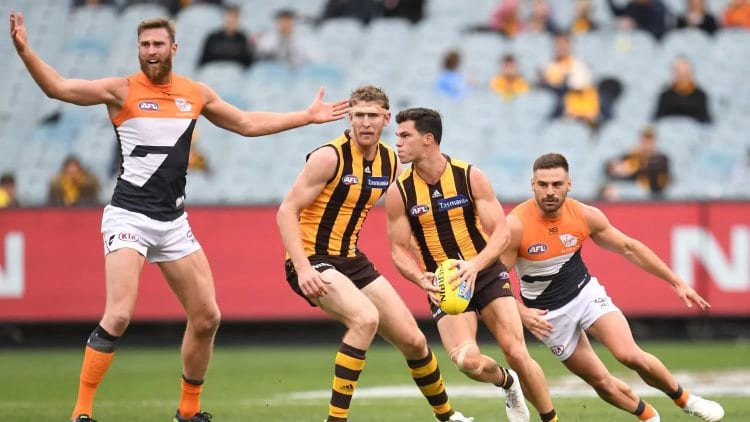 Much like Round 7, last week featured plenty of away winners with six of the nine games being taken by the visitors.

We have free expert tips for AFL Round 9 this week which includes some blockbuster games throughout the week, starting on Friday with the Eagles vs Demons.

Both teams come into Round 9 with a win last week and this should be a good game to open up the week.

Eagles were 88-70 winners over St Kilda last week and the Demons held on to win 61-60 over the Gold Coast Suns. There’s little doubt that the Eagles win was the more impressive of the two.

Playing at home will help the Eagles on Friday night and we’re predicting a close contest for most of the game before the Eagles pull away late.

Collingwood continued their march back to the AFL Finals when beating Carlton last week and extending their winning streak.

The Magpies have looked better than average for most of this season and despite the Saints showed some form this season, they’re trending negatively.

Bookmakers have the Magpies as firm 30.5-point favourites for this game and we’re expecting a slightly closer game than bookmakers are.

Brisbane are a different team at home and although beaten last week by the Bulldogs, they grow a leg at The Gabba.

That could spell danger for the Crows, which are the underdogs for this game. However, the Crows were impressive 88-68 winners over Port Adelaide last week and they have seemingly found their groove.

Winning again this week could certify their return to form and we think the Crows could get the job done nicely.

The Geelong Cats are going along nicely this season and currently lead the league. They’re coming off a 104-80 win over the Kangaroos and they don’t look like slowing down.

Being back at home will only help them but the Bulldogs have been a pesky team to get past this season. The Bulldogs are coming off a 92-76 win over Brisbane and that’s a quality win at this stage of the season.

Bookmakers have 29.5 points between these teams and that’s probably fair given the Cats form, but this game could be closer than advertised.

The Bombers were beaten but not disgraced last week. They lost by five points to the Swans and although that game was there for the taking, they can rebound to win this.

Fremantle looked only average when losing 111-86 to the Tigers on Sunday and they have never been a great team playing on the road.

This is the ideal opportunity for the Bombers to notch up an important win and make some headway on the premiership ladder.

Sydney’s coming off a strong 77-72 win over the Bombers last Friday and having had the eight-day break is going to help their cause.

Bookmakers have this as one of the more even games on the card this week and we’re expecting a tight tussle. The Kangaroos were beaten by the Cats last week but did well to score 80 points.

Both teams have been tough to follow with any consistency this season but there’s plenty of wins in store for both teams.

There won’t be much between them.

We expected more from the Port Adelaide Power last week when they lost by 20 points to Adelaide.

That was a disappointing effort from a team which had been playing well at Adelaide Oval. They have a chance to rebound here, however, as the Gold Coast Suns come into town.

The Suns let an opportunity slip against the Demons last week when losing by a point and that’s not going to help their desperate cause this season.

If the Power are going to be in playoff contention this season, a big win should be expected here.

The Tigers and the Hawks are coming off good Round 8 wins and punters should see a tightly-contested battle here.

Tigers were 111-86 winners over the Dockers away from home last week and the Hawks put on a defensive masterclass against the Giants.

Hawthorn scored only 71 points but gave up just 38. That was a one-sided game and another performance like that would take them close.

Bookmakers have Tigers as the favourites but not by much.

The Giants might be coming off a poor loss to the Hawks, but they’re overwhelming favourites against the Blues.

Carlton lost 106-87 to Collingwood last week and although it wasn’t a bad effort, they’re not going to find this any easier.

Giants looked much better earlier in the season and they should find playing at home more to their liking.