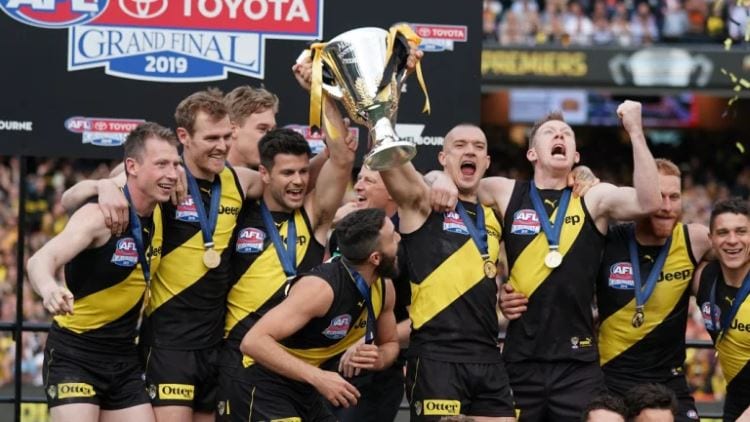 Footy is just around the corner so we have done the form to come up with our season predictions and expert betting tips for the 2020 AFL Season.

We feature AFL Premiership tips, Coleman Medal winner, Brownlow Medal winner and all the other exciting markets that punters can bet on this season.

Heading the market to win the competition are the Richmond Tigers. Can they go back-to-back? Or, will one of the many challengers take out the title?

We tipped the Collingwood Magpies to win last season and we weren’t that far off. They finished in fourth position after the regular season, only one win from claiming the top spot.

We believe the Magpies are gradually improving as a side and the last two years are evident of that. Having lost in the Grand Final in 2018, the Magpies could have easily thrown in the towel last season, but they stuck on gamely.

With a team that features plenty of experience but also some talented youngsters, Collingwood is in a position to have another crack at the premiership.

Punters are getting value odds and the Magpies should give you a good sight throughout the season.

2019 was quite an amazing effort from the Brisbane Lions and although it’s not easy to repeat that feat, we’re giving them a chance.

It was only a couple of years ago when the Lions were easy beats in the AFL. Fast forward to 2020 and they’re now legitimate title contenders.

They are coming off a 16-win season and although it’s tough to ask for the same effort, they’ll be better prepared for a run in the finals this season. Having the finals experience will do them plenty of good, so take the $11 on offer.

We’re expecting those odds to shorten as the season progresses.

Punters never know what to make of the Essendon Bombers but the $2.60 is value price from bookmakers.

They finished inside the Top 8 last season with 12 wins and 10 losses. We think they could improve on that season, as they had plenty of games slip away from their grasp.

With a more balanced attacking approach, the Bombers could give the well-favoured teams something to worry about this year. The Bombers are certainly good enough to beat the struggling sides, so their finals chances are good.

We’d love to see them in the thick of the action.

The North Melbourne Kangaroo was a top choice last year and we’re sticking with the rangy forward.

Brown kicked 64 goals last season, which was only three behind the winner. He kicked 31 behinds, so if he converted a few more, he could have been the crowned champion.

However, punters are getting good value this time around as well. Bookies are offering $6 for Brown to win the title and we’re expecting improvement. His last three seasons have resulted in goal records of 63, 61, and 64.

He’ll be right around the mark once again.

It would be a huge story if Lance Franklin was to win the Coleman Medal, but we believe in the big man.

He scored only 27 goals last season but played only 10 games. He hasn’t played a full season since 2017 and he scored an incredible 73 goals. If he’s able to stay healthy throughout the season, there’s no reason why he can’t win.

The 2016 Brownlow Medal winner received 35 votes to win and he got close to that mark last season with 27. He only needs to play at a slightly higher level to score his second Brownlow Medal.

His statistics in 2019 weren’t too far off those in 2016, so with slight improvement, he could be the one favoured at the end of the season.

Some punters might not see the value with the $6.50 odds, but Patrick Cripps is a good pick for the 2020 Brownlow Medal.

The Carlton Blues star scored 26 votes last season and because he’s young, he’s only going to gain popularity as his career progresses.

His confidence is growing and the bookmakers have taken notice. He’s the current favourite to win the medal and we wouldn’t put it past the 24-year-old. He has all the ability to become one of the best in the AFL and they would love to crown a rising star come October.

There is only one team backed to have the least wins in 2020 and that’s the Gold Coast Suns.

They are the raging-hot $1.62 favourites to win the coveted title and considering their premiership odds of $301, we’re not surprised to see this. They’re coming off another poor season and there doesn’t appear to be any direction at the club.

Throw this option into your multi bets and although the odds are short, it’s not lacking in value.

🤑 Who should you bet with for the AFL season?

Our top rated and recommended bookmaker for everything AFL is Sportsbet – JOIN HERE.
Other top rated bookmakers for AFL include BetEasy, PlayUp, and SportsBetting.

💰 What is the best bet for the AFL season?

To find out our best bets for the upcoming AFL season for the Premiership, Brownlow Medal, Coleman Medal, and more – read our full AFL season preview and betting tips!

📺 How can I watch the AFL season matches?

For detailed information on how to watch and live stream all matches of the AFL season, read our guide on how to live stream AFL!

🏉 What is the fixture for AFL season?

Read our round-by-round previews to find out all of the fixtures and best bets for each round of the AFL season!