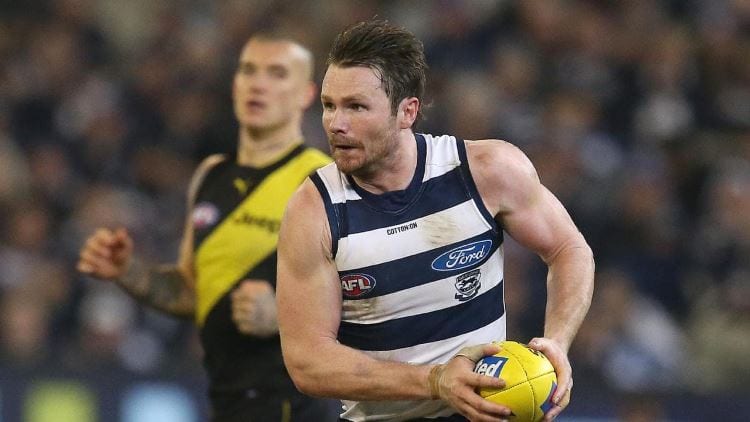 It’s almost time to award the AFL Brownlow Medal where the best players in the game get celebrated.

2019 sees a wide-open market where any number of seven players have been well-backed to take home the honours.

Patrick Dangerfield is the current favourite to win in the outright markets, but the likes of Marcus Bontempelli, Lachie Neale and Nat Fyfe are hot on his heels.

There is plenty of value to be snapped up by punters and it promises to be an exciting awards night at the Crown Palladium Ballroom in Melbourne.

2016 winner Patrick Dangerfield is back in the Brownlow Medal picture after another terrific season.

The Geelong Cats superstar has battled injuries over the last few seasons, but despite that, he’s the favourite to win this year.

#35 has played 23 games this season and scored 26 goals. He scored four goals in his game against Carlton in Round 23 and he all but guaranteed the three points on that occasion.

The majority of his points would have come earlier in the season but he did play well towards the end of the regular season.

He had consistent numbers through rounds 21-23 and his stat sheets read well to poll votes. He had 55 kicks during that three-game stretch and he put up some cracking marks.

He’s a team leader for the Geelong Cats and although that doesn’t earn you points for the Brownlow, it does demand more respect.

$2.60 is a fair price for the likely best and fairest in the AFL.

Nat Fyfe is currently on the fourth line of betting but we think he’s a better chance than the other two players ahead of him.

The rangy Fremantle Dockers captain played only 21 games this season, but he averaged 14 kicks per game and just under one goal.

His form towards the end of the season was impressive and that’s always important in the eyes of the voters. He scored six goals over his last four games and had he took some great marks.

Unfortunately, the Dockers lost their last three games which won’t help his cause. However, he was a beast mid-season with some great games.

He even had a three-goal performance against Richmond and he held his good form throughout the course of the season.

Punters are getting a good price for Fyfe and he’s worth the risk.

Punters shouldn’t sleep on Brodie Grundy. The Collingwood Magpie will get a lot of votes towards the end of the season.

The 25-year-old isn’t a goal scorer but he does everything else at the highest of quality. He closed the season with an average of 9.8 kicks, 11.3 handballs, 21.1 disposals and 4.4 marks per game.

A large majority of those statistics were increased over the final few rounds of the regular season. He had a big game against the Bombers in Round 23 and he would have gone close to securing all three points.

He’s a sneaky chance at winning the 2019 Brownlow Medal and there are many worse chances paying $15 to win.

In other markets, punters can back Grundy to have the most team votes for Collingwood. It’s an even market with Brodie Grundy the current favourite at $1.95.

On his heels is Adam Treloar at $2.15, but we think Grundy is the much better bet.

We have found a value bet in the Top 20 market and his name is Jack Billings.

The St Kilda Saint had a productive 2019 season with some statistics which could earn him a spot inside the Top 20 voting.

He averaged 11.4 handballs, 14.4 kicks and six marks for the season. His stats look good enough to finish inside the Top 20 and punters are getting good odds for the youngster.

He closed the season in fine style with 27 disposals and eight marks against Fremantle in Round 21 and 26 disposals with seven marks and a goal against Carlton in Round 22.

Billings should have received some points for those performances and he was also strong throughout rounds 16-18.

$2.40 is a fair price from bookmakers and it gives punters someone to follow who isn’t tipped to win the Brownlow Medal.

Be sure to also check out our preview for the 2019 AFL Grand Final for all our betting tips including our Norm Smith Medal prediction.

🤑 Who should you bet with for the Brownlow Medal?

💰 What is the best bet for the Brownlow Medal?

🏅 What are the best value bets for the Brownlow Medal?

📺 How can I watch the Brownlow Medal?