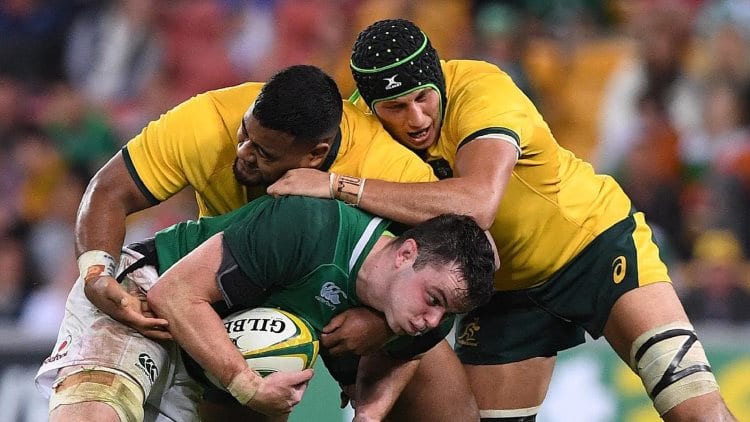 All eight teams are back in action for Round 2 this week and bookmakers have adjusted their lines depending on the first game result.

We have free tips and form for the four international rugby games this week, kicking off with the All Blacks vs. France on Saturday night.

All odds are with Sportsbet – our No. 1 rated bookmaker. You can join Sportsbet by clicking HERE..

There were some nervous moments for New Zealand at Eden Park last week but it turned into a one-sided victory.

Trailing by three points at halftime, the All Blacks went on a rampage in the second half and quickly put up 50 points on France, which gallantly battled well until a controversial sin-binning left them with 14 men.

The home side quickly capitalised on the one-man advantage and put their opposition to the sword. Punters are predicting something similar in Wellington this week and how France rebound is the big question.

An 80-minute performance will be needed if France are going to cover the +29.5 line but with the weather meant to be a touch wet, France could keep the game in the forwards and keep it tight.

The All Blacks will make it 2-0 in the series but we’re expecting France to show some fight.

We expected Ireland to come out and win the opening game of the series at Suncorp Stadium, but Australia stuck around and eventually pulled off the upset.

The Wallabies pulled away from Ireland over the concluding stages and that will give them plenty of confidence heading to Melbourne for Game 2, but the Irish are quick learners and we’re expecting more of a complete performance this time around.

Ireland’s lack of ability to score tries came back to haunt them last week and we’re hoping to see more attacking flair as opposed to penalty kicks this week. Australia will likely give away plenty of penalties, but the Wallabies have the potential to go up in fives.

Most of the money has come for Ireland after opening at $2 and they’re now into $1.96 with strong movement in the points start options. Punters are confident that Ireland can square the series and produce on Saturday night.

This game could go either way, as the market suggests, but we can’t see a clean-sweep coming the way of Australia and Ireland have room to improve.

1:05am South Africa vs. England @ Bloemfontein

England piled on the points early against South Africa last week, leading 17-0 at one stage but the home side was able to fight back and win.

It was disappointing from an England point-of-view as they’re typically good front runners. That will be in the back of their minds this week and a much better defensive effort will be needed in order to keep this series from going 2-0.

South Africa must be applauded for the way they struck back at the early attack of England last week and they certainly finished much the stronger side. It was a solid performance from both the forwards and backs for the home side and it was a confident-building win.

The Springboks have been having a rough time of it on the international stage over the last few years and to secure a win over England will do them plenty of good, but will it be enough to win again this week?

Bookmakers have England as the underdogs again for Game 2 and that’s probably fair given their second-half performance last week, but they’re a value play this week.

Expect a better effort from the visitors.

Argentina have always been strong performers at home and they simply didn’t take advantage of their opportunities. The fast-paced style looks brilliant when it works but looks horrible when it doesn’t.

Wales were able to take advantage of this and record a stunning upset over the host nation. What does that mean for this Sunday’s game? It gives Wales confidence that they can win away from home and it should also wake the Pumas up.

$1.80 is on offer for Argentina this week, as opposed to the $1.52 last week and that’s good value in our books. Punters should expect a better effort from the Pumas and we can’t see them losing consecutive games to Wales.

About the Author: David Butler

David is sports and horse racing fanatic and is GoBet’s most prolific writer. Having grown up in Victoria, he has a passion for AFL and covers multiple horse racing meets every week, as well as all of the big Group 1 races in Australia.