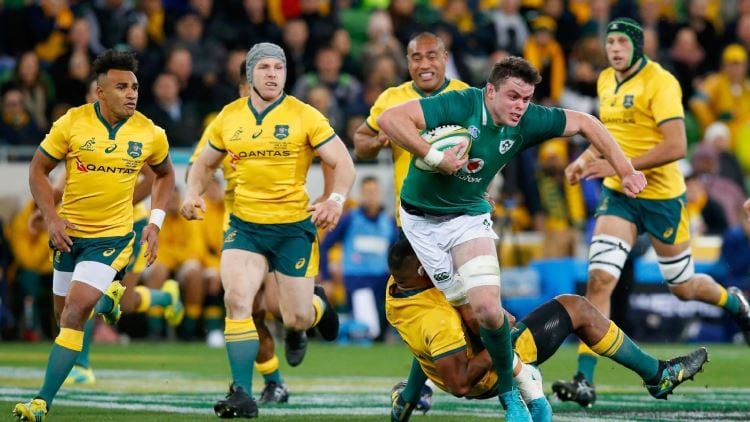 It’s the third and final week of international rugby before Super Rugby kicks back into action.

The only series on the line is the Australia vs. Ireland series, which is locked up at 1-1, but there’s still some great bets in store.

We have tips for the All Blacks vs. France, Australia vs. Ireland, South Africa vs. England and Argentina welcome Scotland into town on Sunday morning.

The second test between these two sides wasn’t exactly easy to watch, but it did provide some good storylines and it should make for an exciting Game 3.

A red card handed down to the French made it tough from the outset but they kept in the game and only lost by 13 points. The margin of victory didn’t flatter France, which battled well throughout the game and forced the All Blacks into making some rookie errors.

The All Blacks have been met with some harsh criticism in New Zealand as the 2019 World Cup approaches, but they don’t have much to worry about after beating France in their last 12 games.

France have scored some notable upsets over the All Blacks throughout the course of history, most notably in World Cup finals, but this game should extend the AB’s winning streak.

The points start line of 23.5 will make it close but the conditions under the roof in Dunedin will make for plenty of points.

Australia took the first game in dramatic fashion but we put in their place last week as Ireland established their dominance.

The Irish forwards did a good job against the Wallabies, which looked frustrated at times and committed plenty of penalties near their own try line.

Bookmakers have installed Ireland as the $1.60 favourites to win the series and momentum is certainly in their favour. As one of the better rugby union sides in the world, Ireland are preparing well for the World Cup and another win against Australia looks likely.

Australia has the ability to cause an upset, however, as players such as Israel Folau and Samu Kerevi have the ability to break a game wide open. Some scintillating play from the outside backs could force Ireland to panic and go outside their game plan, but the onus is with Ireland.

1:05am South Africa vs. England @ Newlands

After looking like one of the best teams in the world at the end of 2017, England have come crashing down after consecutive losses to South Africa.

South Africa were in horrible form last year after getting blown away in the Rugby Championship against New Zealand, Australia and Argentina, but they’ve found some form against an English team which clearly doesn’t travel well.

England led by 17 points in the opening test before being run down 42-39 in the concluding stages and the second test wasn’t any better, losing 23-12 in a one-sided display.

The Springboks needed a series win and it would take a brave punter to back against them this week, considering their impressive 2018 form.

Bookmakers have the line set at –5.5 and we’re confident they can cover the spread with some ease. Tries shouldn’t be hard to come by on a rock-hard Newlands surface.

5:40am Argentina vs. Scotland @ Chaco

The Argentines have been the most disappointing team during the three-week international series after losing 2-0 to Wales.

They were completely outplayed on home soil and it was a surprising result given the form of the Jaguares in the Super Rugby competition. Wales have moved on and now Argentina welcome Scotland, which have been playing against Canada and the USA.

They’re travelling even worse than Argentina and this could give the host nation something to cheer about. Argentina needs this win more so than Scotland and we’re confident they can bounce back.

About the Author: David Butler

David is sports and horse racing fanatic and is GoBet’s most prolific writer. Having grown up in Victoria, he has a passion for AFL and covers multiple horse racing meets every week, as well as all of the big Group 1 races in Australia.