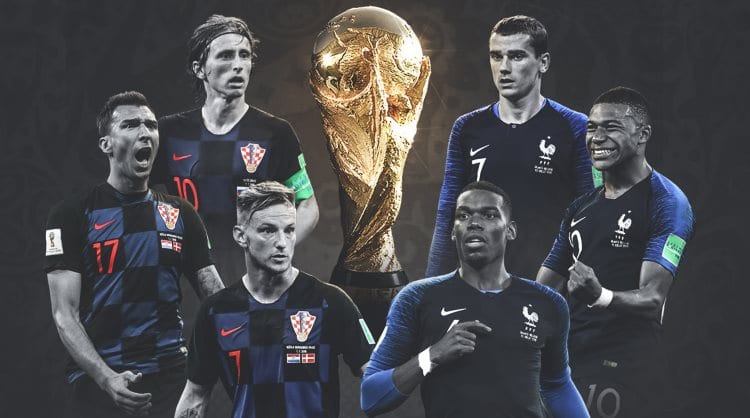 The moment has arrived and for two countries, the biggest prize in world football awaits. With 63 games played over the past month – in what has been described as one of the most successful tournaments ever – both on and off the field – the World Cup 2018 will culminate with France playing Croatia with the winners crowned world champions. France are in their first final since 2006 whilst Croatia have reached new heights and have bettered their 1998 bronze medal by reaching the final.

Here are our top betting picks for the 2018 World Cup final:

It’s an all European final in Moscow as France and Croatia face off for the right to be crowned world champions. France last won the World Cup on home soil back in 1998 whilst Croatia’s best performance at a World Cup also came back in 1998 – where they picked up the bronze medal. 20 years on, the next generation of both nations are doing their respective countries proud and the impact of that World Cup in France in 1998, seems to be present within both squads.

France have warmed up very gently into the 2018 World Cup and despite being many people’s pick prior to the tournament beginning, have only really emerged as a force during the knockout stages. Les Blues came through a relatively strong group without impressing massively, defeating Australia and Peru by the odd goal before drawing with Denmark in an underwhelming start to the campaign. Their World Cup ignited against Argentina however in the last 16, with France pulling through 4-3 in a World Cup classic – with Kylian Mbappe announcing himself on the elite stage with 2 goals to propel the French to the last 8. They dispatched of Uruguay with relative ease in the quarter-finals, with Raphael Varane and Antoine Griezmann scoring the goals, Belgium were next in their wake and Didier Deschamps’ men displayed real tactical knowledge and discipline to shut out their neighbours and won the game 1-0 thanks to Samuel Umtiti – to reach their first final since 2006.

It has been a remarkable run for Croatia, as the country with only 4 million people have reached their first ever World Cup final. They emerged as group winners from a tough pool that included the likes of Argentina, Iceland and Nigeria and they managed to finish the group with a 100% winning record – including a remarkable 3-0 win over Lionel Messi’s Argentina. Their subsequent performances have been a little more attritional – in the form of draws with Denmark and Russia and they have lacked the fluency they displayed earlier in the tournament but still managed the job done on penalties. They displayed real mental toughness to come back from 1-0 down against England in the last 4, to squeeze through 2-1in extra time thanks to a Mario Mandzukic strike. Their world class midfield consisting of Ivan Rakitic and Luka Modric have managed to dictate things in most of their games so far and they will be looking to do the same here against France in what could be a very tight encounter.

With so much at stake, there will be no quarter given by either side – who will both be desperate to claim glory for their countries. France will look to control the ball in midfield, with the likes of Paul Pogba and N’Golo Kante providing opportunities for the creative influence of Antoine Griezmann and Kylian Mbappe to stretch the Croatian defence. Croatia’s midfield strength is apparent too – with Rakitic and Modric metronomic in the middle of the park whilst their defence has been a key component of their success here in Russia too.

This could be quite a cagey game with both teams desperate not to lose. Croatia have found a way against all their opponents so far at the 2018 World Cup but France’s golden generation should get the job done here – on the biggest stage of all.

Betting tip: France to win the match and both teams to score ($4) – BET NOW

Both Teams To Score – YES – 1.95 – World Cup Finals are notoriously cagey encounters but both teams are blessed with attacking talent and will fancy their chances of scoring on the biggest stage of all – BET NOW

Over 1.5 Goals In The Game – 1.42 – Despite the enormity of the match, both teams have played their best stuff on the front foot out in Russia and they will want to do so again if possible – BET NOW

Kylian Mbappe to score anytime – 2.85 – The PSG wonderkid has had a remarkable tournament and how he would love to cap it with a goal in the World Cup Final – BET NOW

France to win the match – 2.15 – Having reached the final of the European Championships in 2016, the French seem to have experience at this level and should get the job done against a plucky Croatia side – BET NOW