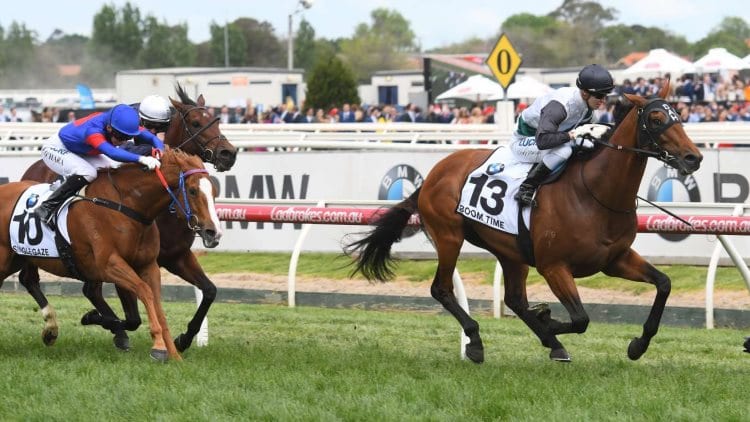 What is a Quinella?

A quinella pays on the first two horses to cross the finish line in any order. So if you’ve narrowed the chances in a particular race down to just two runners, then taking a quinella might be your best bet.

For example, in the 2017 Caulfield Cup, Boom Time snuck up the rails to claim victory over crowd favourite, Single Gaze.

Boom Time paid out a very healthy $51 for the win, while Single Gaze was paying $31 for the win at race jump.

The quinella on this occasion, for the horses to finish first and second in any order, paid out a dividend around the $585 mark on the Vic Tote.

What is an Exacta?

You might choose the Exacta over a Quinella if you think one horse has a clear advantage over your second pick.

If we look at the 2017 Caulfiled Cup again as an example, to win the exacta you would’ve had to pick Boom Time to win and Single Gaze to come second. If you were lucky (or skilled) enough to do this, you have received a nice dividend of around the $940 mark on the Vic Tote.

As you can tell from the above examples, picking the Exacta is going to be a lot tougher than picking a Quinella, but if you get it right it can substantially increase your winnings.

What is a “Boxed” Quinella or “Boxed” Exacta?

You can increase your odds of success by choosing multiple runners or “boxing” your selections, as it’s more commonly referred to.

For instance, you may like to “box” three or four runners that you fancy in a quinella or exacta, which will give you a chance of winning all possible combinations.

For example, in the 2017 Caulfield Cup, you probably would’ve wanted to include the $5 favourite, Johannes Vermeer, in your “boxed” selections. Johannes Vermeer ended up finishing in third place and if he had have finished first or second, his $5 odds would’ve seen quinella and exacta dividends significantly reduced.

We’ve used the 2017 Caulfield Cup for our examples on quinellas and exactas, so you can watch a replay of the thrilling finish below: