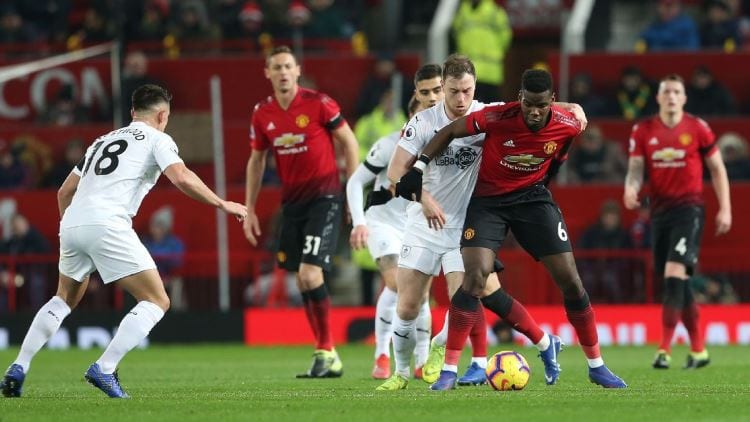 Wolves pushed Liverpool all the way last time out in the Premier League, but the runaway leaders found a way of getting over the line once more at Molineux. Manchester City & Leicester’s battle for 2nd continued with both sides picking up crucial wins whilst Manchester United suffered a humbling defeat at home to Burnley and Chelsea and Arsenal battled out a highly entertaining draw. At the bottom of the pile, Aston Villa looked to give themselves a survival boost with a last gasp win over Watford whilst Bournemouth thrashed Brighton at home to give themselves a glimmer of survival hope.

Here are our picks for the 25th round of fixtures in the EPL:

Liverpool’s first of two Premier League games in the week sees them travel to East London to take on West Ham. The Hammers have been blighted by inconsistency all season and despite the arrival of David Moyes, results continue to frustrate their fans. They sit level on points with Bournemouth in the bottom three following their 4-1 thrashing at Leicester last time out in the league and their FA Cup defeat to West Brom was particularly chastening. Liverpool meanwhile continue to fight on three fronts despite Jurgen Klopp naming a very young side against Shrewsbury Town in the last round the FA Cup. The manner of their win at Wolves underlined their title credentials and with a 16-point lead, it seems inevitable that they will lift the trophy come May. West Ham took points off Liverpool last season, but the Reds are a different beast this term and they should pick up a comfortable win.

Betting tip: Liverpool to win the match and both teams to score ($1.75) Bet Now

Two sides chasing top 4 football face off on Saturday morning as Leicester welcome Chelsea to the King Power Stadium. Brendan Rodgers’ side picked up an excellent win over West Ham in the league last time out to cement their place in 3rd in the table but the manner of their Carabao Cup semi-final exit to Aston Villa in midweek will be a tough one to take for the Foxes. Chelsea meanwhile will be hoping to continue to distance themselves from the chasing pack in pursuit of top 4 football. They have a 6-point gap on the likes of Manchester United below them but their inability to consistently string results together is sure to be a key frustration for Frank Lampard currently. This should be a fascinating match up between two well balanced sides and it could well end up honours even in the East Midlands.

A relegation six pointer looks to be on the agenda on the South Coast as Bournemouth host Aston Villa. The Cherries had endured a rotten spell, which saw them lose to West Ham, Norwich City and Watford in recent weeks but they bounce back in style in the league last time out to beat neighbours Brighton. They are still in the relegation zone but only by goal difference and they need to keep picking up points if they are to get out of trouble. Aston Villa meanwhile look to be immersed in the relegation picture too as they sit only two places and two points above the Cherries. They picked up a crucial last gasp win over Watford last time out in the league and the manner of their Carabao Cup win over Leicester, is sure to fill them with confidence as they secured a trip to Wembley in March. This could be a very tight game and with so much to play for, a draw looks on the cards.

Two sides looking to consolidate in the top half of the table face off in East London as Crystal Palace welcome Sheffield United to Selhurst Park. Palace backed up a big point at Manchester City with a humbling 2-0 home defeat by Southampton and Roy Hodgson’s men can’t seem to find the consistency needed to kick on from a mid-table battle. They may have one eye on European football next season but need to start picking up points more regularly to achieve it. The Blades meanwhile have been in fine form all season under and find themselves flying high in 8th place in the table. With a unique style of play, they have been more than a match for every opponent they have come across this term and they too look to have a realistic chance of finishing in the European places come the end of the season. This could be an entertaining game that could well finish as a draw at Selhurst Park.

Betting tip: The match to finish as a draw and both teams to score ($3.8) Bet Now

Liverpool play their second game of the week against Southampton with Jurgen Klopp almost certain to use his full squad across both fixtures. The reds continue to churn out the results and have only dropped two points in the league all season as they look to bring home the Premier League title for the first time in 30 years. Southampton meanwhile will be looking to kick on from their excellent win at Crystal Palace last time out. Despite a blip at home to Wolves, the Saints have been in fine form of late and have steered away from the relegation zone for the time being and sit in 9th place in the table. Southampton will make this tough for Liverpool but the reds just don’t drop points at the moment and they should battle through this one.

Newcastle will be looking for revenge for their early season defeat to Norwich as they two sides meet at St James’s Park on Saturday. The Toon find themselves 14th following their last gasp equalizer at Everton – where they scored 2 goals in injury time. Steve Bruce looks to have improved the feeling around the club, but they are not free from relegation trouble yet and they will need to target games such as these in order to stay up. Bottom side Norwich meanwhile showed fight with a crucial home win over fellow strugglers Bournemouth and in defeat at Spurs but the gap between themselves and safety continues to widen. They currently have a six-point deficit to overturn, to the teams above them but with plenty of games to play, they have time to turn things around. This could be a tight game with so much to play for at St James’s Park but the Magpies should pick up all three points here.

Two sides in need of three points face off in North London as Watford host Everton. The Hornets were unbeaten in 7 matches in all competitions before defeats to Tranmere Rovers and Aston Villa look to have checked their progress. They have improved dramatically under Nigel Pearson but still find themselves in the relegation zone – two points adrift of safety. Everton meanwhile have improved in recent weeks under the stewardship of Carlo Ancelotti and they will be hoping to keep the run going here. Consistent results have seen the Toffees climb to 12th and they look well clear of the relegation picture currently. They dropped two points in the final few minutes at home to Newcastle and they will be eager to bounce back here. This should be a very tight game between two well matched teams, and it could end up finishing as a draw.

Betting tip: The match to finish as a draw and both teams to score ($4.3) Bet Now

West Ham’s second game of the game week comes at home to Brighton, with both sides eager to pull away from trouble asap. The Hammers will see this game as far more winnable than their clash with Liverpool on Thursday night and David Moyes may adjust his squad accordingly. Brighton meanwhile sit 15th in the table following their defeat to Bournemouth last time out and they are searching for the consistency that will pull them away from trouble. They have enjoyed a decent season under Graham Potter but they can’t seem to fully detach themselves from the relegation scrap just yet and will see this as a big game. This should be a highly entertaining clash between two sides that look to play on the front foot and a score draw looks on the cards.

Betting tip: The match to finish as a draw and both teams to score ($4.15) Bet Now

Manchester United’s Premier League problems continued with a painstaking defeat to Burnley at home last time out but they have chance to bounce back at Old Trafford against Wolves. The reds still sit 5th in the table following an inconsistent season under the stewardship of Ole Gunnar Solskjaer and they are still very much in the mix to finish in the top 4 come the end of the season – only 6 points behind 4th place Chelsea. Wolves meanwhile find themselves level on points with United and in 7th position in the table. They pushed Champions elect Liverpool all the way last time out and they are very much in the picture to finish in the top 4 come the end of the season. This should be a highly entertaining game at Old Trafford and the reds could well come through this one with three points in the bag.

Betting tip: Manchester United to win the match and both teams to score ($3.05) Bet Now

Burnley will be looking to continue their impressive run of Premier League form as they welcome Arsenal to Turf Moor. The Clarets have beaten Leicester City and Manchester United in their last two games and they will be chomping at the bit to have a go at the Gunners here. They sit 13th, 7 points above the drop zone and they will need to keep picking up points to avoid being dragged into the relegation picture. Arsenal meanwhile sit in 10th in the table and they should come into this one buoyed by their excellent point at Chelsea last time out and their comfortable FA Cup win over Bournemouth. They have looked a more organised outfit under Mikel Arteta but they need to start picking up wins more regularly if they are to climb the table. This should be an excellent game between two strong teams but Arsenal should pinch all three points here.

Betting tip: Arsenal to win the match and both teams to score ($3) Bet Now

The biggest clash of the weekend sees Champions Manchester City travel to Jose Mourinho’s Tottenham with both sides in need of a win. Spurs beat Norwich last time out and climbed to 6th in the Premier League table as a result and they will need to continue to pick up points regularly if they feature in the top 4 come the end of the season. Second placed Manchester City meanwhile will be looking to kick on from impressive wins at Sheffield United in the league and over Fulham in the FA Cup. They have an 11-point cushion to Chelsea below them in 4th and they will be looking to extend that lead here with the Carabao Cup, Champions League and FA Cup still to play for. This will be a seriously tricky test for Pep Guardiola’s men, but they are a high-quality side on their day and they should just prevail here