Couldn’t have been more impressive winning her maiden for the Russell kennel in 30.10, solid first sectional and a lightning second setting up her break.

Draws close to the fence again is a huge tick and has been reliable enough out of the boxes at very least should hold the rail around the first turn before running away from them.

If he can avoid the early speed of Blue day outside him early and position himself anywhere near midfield should be a big chance here at a decent price.”

Came from New South Wales to the Zammit kennel with big raps on him and lived up to in running 29.98 first look here last week.

Very generously graded in this company not electric early Columbian King is the likely leader, but flies down the back and is strong late, probably comes up very short in betting maybe a multi play.

Chosen to play around odds on favourite Sequana here, she wins at her best but may be vulnerable first up.

Tevita Shadow brings some nice form lines in closing to within two lengths of Aston Lee late last week and winning his start prior.

Lightly raced dog seems to be coming into his own, box draw looks good Townson Beach will give the big dog plenty of room to work early from box three.

Can be costly for punters from outside draws but has been near enough bullet proof whenever drawn the red over any distance.

The hallmark of her debut 710 metre win two starts back was her front running style and she should get every chance to lead this field.

Rasheda is a danger if she sees clear running, will get back and need luck while Velocity Bettina will make her own on speed.

A true open class dog brings his best every week and boasts a good record from wide draws at the six hundred metre start.

Should be able to push forward with slow beginners Pump It and Zipping Cosmo to his immediate inside and no pace outside, if he lands towards the front around the first corner watch out has shown he can run the 710 out as well.

Placed at Group Three level and the track and trip, Infrared Lad on his inside should give him a nice cart around the first corner, Sir Pantsalot won’t be able to keep up outside.

Each way, quinella or place punters should give Jasper The Jet a big look, has been a rapid improver the last few weeks coming off a sizzling 29.75 personal best.

Is the quickest of the outside brigade and should run across just behind the likes of Oh Mickey and give plenty of cheek.

Shifts a few boxes wider and up in grade this week, but still looks the one to beat.

Jamie Hosking’s kennel is flying, and the dog should have taken natural improvement from another week settling into the kennels.

Has been a top-grade dog over the short course at Albion Park and Ipswich for much of his career, has just begun to stretch out to the 520 metres and in a race devoid of speed he looks the likely leader.

He’ll be on tired legs late but if every chance of opening a significant gap on them, in fantastic form as well winning and placing his last five worth a go at a good price. 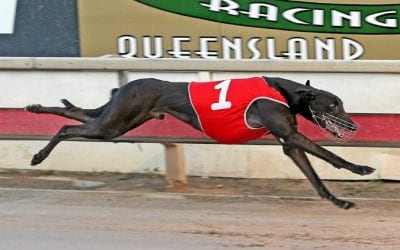