Only seven runners contest the Group 1 Black Caviar Lightning Stakes but they are the best sprinters Australia has to offer.

It’s going to be a cracking race down the Flemington straight, where Nature Strip holds sway in the betting. 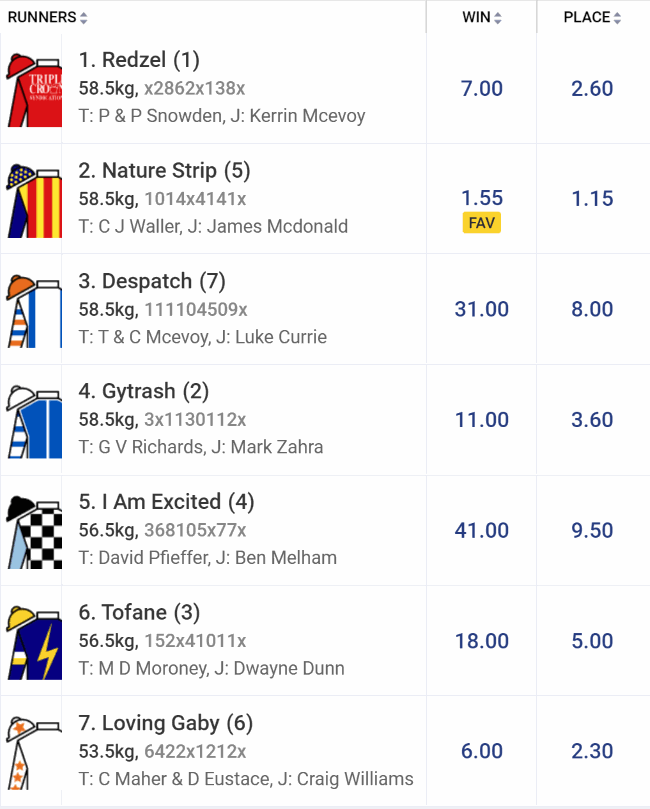 We have left out the two-time Everest winner from our selections but he’s every chance of winning this race.

The champion sprinter is a 15-time winner and he performs best when the pressure is on. Two of those wins have come down the Flemington straight and it would be foolish to completely rule him out.

He scored a recent trial win at Randwick but we wanted longer odds than $7. If he pushed out to $10, he would become a fantastic each-way chance.

Nature Strip has stripped the tag of being enigmatic and he’s now one of the best sprinters in the world.

A short course specialist, the Chris Waller-trained star has won 12 of his 20 starts and he is unbeaten from four starts down the Flemington straight.

He grows another leg when racing down the straight and it would take a brave punter to back against him this Saturday.

The odds are short but he’ll be featuring in a lot of multibets this weekend.

The McEvoy-trained five-year-old looked to have ability earlier on during his career but hasn’t done much since.

His most recent run came in the Group 2 Schillaci Stakes where he finished last of nine runners. He was 4.7 lengths behind the winner at Caulfield and that form doesn’t bode well for this.

His only run at Flemington was an unplaced effort and he would need a big turnaround in form to be competitive.

Bookmakers have taken good action for Gytrash at double-figure odds. The four-year-old owns six wins from 14 starts but has yet to face a field of this nature.

The son of Lope de Vega draws barrier two and we’re unsure if that’s going to be the place to be. He doesn’t like being in between runners, so he might drop out the back and be saved for one run.

He’s a touch shorter in the market than we would have liked to have seen. If he’s going to beat the likes of Nature Strip, we would want $20.

I Am Excited has the ability to get punters excited, especially if you’re taking the $41 on offer. However, he was hard to trust last campaign, which included consecutive sevenths.

His trial form since hasn’t been up to her usual standard and that’s a concern. She does own good form at Flemington but we’d be looking at backing her in something much easier.

This is no doubt a run for targets later this autumn, so she’s a watch horse.

Mike Moroney is hitting all the high notes this season and we’re giving Tofane a chance because of this.

The four-year-old mare is a four-time winner from nine starts and her most recent win at Flemington was a classy display.

It didn’t come against Group 1-level opposition but Moroney is getting his youngsters to perform at high levels.

She’s worth putting in selections and despite drifting in the betting, punters should include her at long odds.

It could be a big season for Loving Gaby, which scored some big wins last season and she’s a quality Group 1 filly.

She is always dangerous at the weights and carrying 53.5kg with Craig Williams in the saddle is going to make her tough to hold out.

Her opening odds of $5.50 have drifted to $6 and we’ll happily take the longer odds offered.