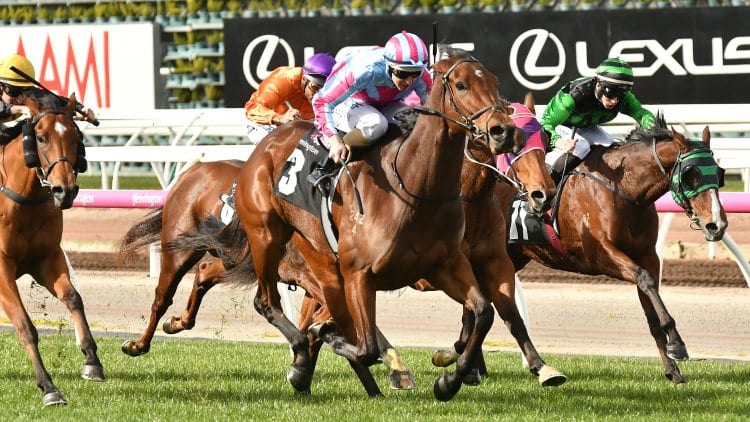 The Easter Cup is the major race at Caulfield this Saturday and there are some quality betting fields on offer.

We have free tips, form and odds for all nine races on the card.

Impressive winner fresh up at Seymour and although beaten last time out at Sandown, that run should hold her in good stead for this.

The Ellerton/Zahra-trained four-year-old has been in the money in 11 of her 16 starts and that consistency is what punters love to see.

54kg on her back helps and she should be right around the mark.

Chris Waller lines up the imported gelding which has had two runs in Australia for two solid performances.

His most recent run came behind a nice type at Flemington where he ran sixth and he’s only going to get better with time this campaign.

Gets the inside draw and a nice run throughout.

Five-year-old gelding Angelucci went close at Caulfield last time out and he could go one better in this.

The Lloyd Kennewell-trained runner has won four from 17 starts and although he hasn’t won since 2017, he could return to winning form in this.

Punters should get good each-way odds.

Choisir filly which got the job done nicely by four lengths at Sandown last start and that showed her true class.

The three-year-old capped off some consistent form with a dominating win and although she’s rising back up in grade here, she has experience running at Group 1 and Group 2 grades.

Gets some weight relief with the apprentice in the saddle and she looms as a winning hope.

Three-year-old for Lindsay Park which is coming off a tidy effort in Sydney. He finished fourth behind Krone and that’s some fairly strong form for this.

His two starts prior to that came in Group 3 grade and he was good enough to run third behind Tin Hat at Caulfield.

This is an even field and punters might get nice odds here.

Knocking on the door of a win after three consecutive placings. The Street Boss filly hasn’t won since August last year but she has been going well against some nice types.

She has finished behind the likes of Smart Melody, Humma Humma and Crack The Code. That’s good form and punters are getting very good odds this time around.

Drawing barrier 16 hurts but she only needs a touch of luck.

Also nominated at Randwick on Saturday but if she lines up here, she’s a much better winning chance.

The Maher/Eustace-trained four-year-old scored an emphatic win on this track last start and it’s a track where she has run in the first two in five of her six starts.

That’s a good clip and given her consistency throughout her career, she looms as a good bet here.

That was a better effort when running third at Caulfield last start and he’s going to get every chance to win this.

Carrying 54kg with Craig Williams in the saddle should bring him right into contention after carrying 57.5kg last week.

He’ll be able to use the inside draw and we’re expecting a top effort.

The Cummings-trained four-year-old is resuming after having four months off. His last run came in December and despite rising in grade for this, he drops from 59kg to 54kg.

He has a nice turn-of-foot and that will help here.