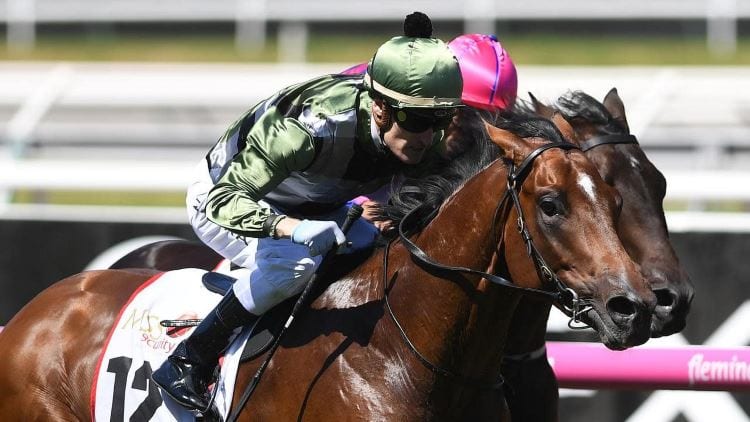 The Bletchingly Stakes has attracted a good field and will headline the card, which is expected to be rain affected.

James Cummings lines up the two-year-old filly which got the job done nicely at Bendigo last time out.

The daughter of Helmut scored by 2.3 lengths when beating Travail and that was a nice performance at her third career start.

Craig Williams takes the ride from barrier two and that’s only going to shorten her price with bookmakers.

We’re sticking with Jorda despite the fact she hasn’t shown form for some time. She finished 10th at Flemington last start but does meet an easier field here.

This is the same Jorda which won nicely at Flemington as a juvenile and if she can replicate that form from a few seasons back, she should be tough to beat.

Punters will get nice odds in this.

Laure Me In hasn’t quite run well since arriving to the McEvoy stables from Darren Weir, but he should strip fitter for this run.

The four-year-old is a four-time winner from 14 starts which has also placed on five occasions. It’s tough to overlook that record and we’re expecting a return to form.

Drawing barrier 15 will force Luke Currie to drop back from the stalls but he should work into the race late.

This isn’t the strongest staying field you’ll ever see and Sasko could take advantage of that. The McEvoy-trained runner wasn’t all that far away when fourth at Flemington last start and that form should hold up.

The four-year-old was a winner at Morphettville three back in June and with three wins from five starts on the heavy track, he will love conditions.

He should be right in the mix turning from home.

It was a long time coming for Not A Single Cent to record his second career victory but he got it done last start.

The Maher/Eustace-trained gelding scored the overdue win at Flemington and with that win under his belt, we’re expecting more to come.

There is plenty of winning form in this race but he has big race experience and that should count towards his chances in this.

The daughter of Americain got slightly too far back during the run and was made to do too much in the straight. From the inside draw here, expect Damien Oliver to settle closer.

That should see her in a challenging position in the straight and makes her a winning hope.

Looking to rebound after a disappointing effort last time out, Sweet Jazz is a leading chance to win here.

The three-year-old filly looked much better prior to that when running second at Caulfield behind Voila and that form looks good for this.

Drawing the inside barrier is ideal and with only 54.5kg on her back, she should be considered a top winning chance.

Sesar is the overwhelming favourite following his win at Randwick and that was a fine performance.

The three-year-old colt loves the wet with two of his three career wins coming on a heavy surface. That bodes well for this run and punters will have to take the shorts.

$1.75 is very short in the betting but he looks a nice type in the making.

There isn’t much winning form to this race and Snitzpeg could take advantage of that.

The four-year-old is a five-time winner from 25 starts and although he’s a bit past his best, he does have more wins in store.

He should find this much easier than his most recent start and punters will be getting nice odds.