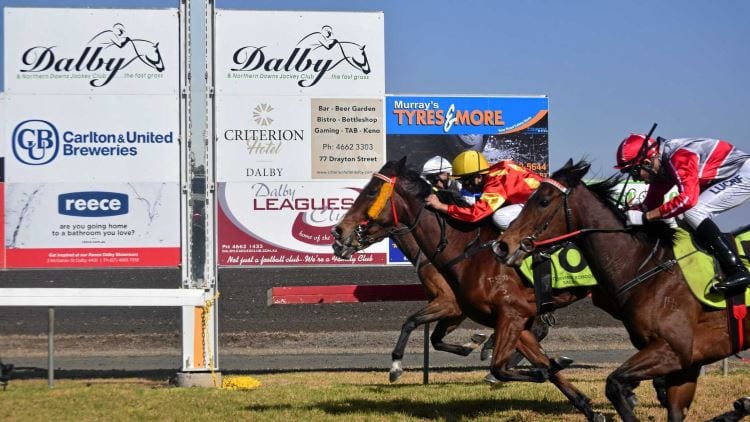 We have expert betting tips for the card this Wednesday at Dalby which features seven quality betting races.

Dalby doesn’t often host a standalone Queensland meeting, so it’s a big occasion for the club.

Pirelli is knocking on the door after consecutive second placings and he could finally break through after 14 starts.

The Smith-trained five-year-old ran second at Rockhampton last time out against a field of 16. That’s a nice effort going forward and he should go close here.

Gets in nicely on the weights and we’re liking his chances of breaking his maiden status.

The Beat is on debut and the three-year-old filly could make a winning start to her career.

She’s a filly by Drumbeats, which hasn’t been seen at the trials but we’re expecting plenty of money to come for her.

Les Tilley takes the ride from a good barrier and this race is there for the taking. It’s not a very good form race.

Chicago Nights got the job done four back at Ipswich and although beaten since, he hasn’t been too far away.

The six-year-old gelding finished second at Gatton in November and although he was only fifth last start, that came against a better field.

The small field is going to help and he gets not only the inside draw, but also a light weight on his back.

The six-year-old gelding won by a half-length at Roma and although his form prior was average, the confidence is back now.

Joshua Morrow takes the ride at 61.5kg and although it’s a big weight, he deserves to carry it as an eight-time winner.

The inside draw makes him even more appealing.

El Prados ran third on debut after setting the pace and he turned that placing into a win last time out.

The Billy Healy-trained three-year-old scored by a massive 5.3 lengths when leading throughout at Toowoomba.

He’s a son of El Roca which should rise through the grades nicely and he’s one of our better bets of the day.

Punters will likely get short odds to win.

Zaiteki was a winner on debut at Ipswich and that showed that she’s a filly to be following.

The three-year-old filly by Golden Archer scored an upset win as a $21 chance before running only 1.8 lengths behind the winner last start.

She meets an even field here which has some winning form throughout. However, she could go well fresh up once again.

Punters should be getting value odds with bookmakers.

Pretty Song is in good form after winning two starts back and following that up with a placing at Dalby last start.

The five-year-old mare has been up for awhile now so she has fitness on his side. That’s going to help her chances here and so will the light weight.

Carrying only 55kg is going to help and we’re respecting her chances in this.