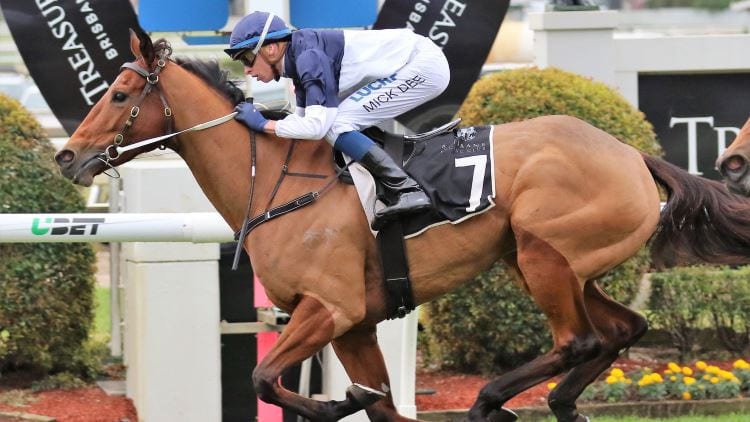 There are nine races on the midweek card at Doomben this Wednesday and we have free tips and form for every race.

The Sky Thoroughbred Central Handicap is the featured race on the card where some nice thoroughbreds are in action.

Matthew Dunn lines up the three-year-old filly which finished third on debut at Lismore behind Snow Valley, which is unbeaten from three runs to date.

The daughter of All Too Hard has since run second in a trial at Gold Coast and that fitness edge will help her cause here.

It’s good to see Jim Byrne in the saddle on not on the stablemate.

Big run for second on debut against similar opposition and although he ran as a $21 chance on debut, he should have more of a following here.

The four-year-old son of Tycoon Ruler doesn’t have much going his way in terms of breeding but it’s tough to overlook that debut run and there are no superstars in this field.

Each way odds should be on offer.

Did the job nicely on debut at Doomben when scoring by 1.3 lengths and the form out of that race should stack up nicely.

Liam Birchley gets his juveniles up and running quickly and that was the case on debut. He looks capable of doing it again and Brad Stewart should be able to find a good position from barrier two.

Has always been a more-than-capable type which didn’t fire at his last two runs but is much better than his recent form is showing.

The Tony Gollan-trained gelding ran third on this track behind Tabbing last year and although winless in three runs since, he has plenty of upside and experience on his side.

Ben Currie lines up the four-year-old mare which went close at Sunshine Coast last start and shouldn’t take long to get back in the winners’ enclosure.

She’s a four-time winner from 19 starts and she has eight placings to her credit as well. That consistency always makes her tough to beat and given her recent runs behind Desert Man and Basara, she should be the hardest to beat.

The apprentice claim is going to help her chances.

Barry Lockwood lines up the talented three-year-old which has two wins and three placings from six starts, which is a good start to her career.

The daughter of Poet’s Voice ran a nose behind race-rival Bold Warrior at Ipswich last start but gets a weight advantage this time around and she was always going to improve with the run under her belt.

Looks well-placed to take this out.

Consistent type which has run in the money at her last three starts, which included a win two-back at Ballina.

She followed that up with a second placing at Sunshine Coast and although beaten, she gets 54kg on her back here and she deserves to be respected against this level of opposition.

Likely to be well-favoured with bookmakers.

The Mick Price-trained runner has shocking form but it has been behind some slick types and is great form for a midweek race at Doomben.

This is the perfect chance for the six-time winner to recapture her best form and she has finished in behind the likes of Manicure, Cool Passion and Brave Song this time in.

Improvement is needed but not much to win at this level.

The three-year-old by Animal Kingdom was well-favoured to win when scoring twice at the Gold Coast and that form doesn’t look too bad for this.

She’s a well-related type which should go close.