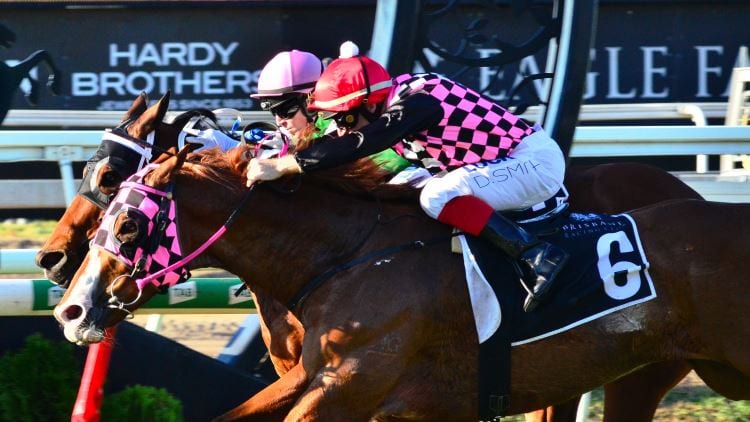 We have expert betting tips for the card this Saturday at Doomben, which features 10 quality betting races.

It’s a massive 10-race card at Doomben and punters have plenty of choice when it comes to quality racing.

We have tips for every race on the card.

Rising Tycoon is on debut for Tony Gollan and the filly could make a winning start here.

The daughter of Written Tycoon scored a half-length trial win at Doomben and that form should stack up nicely.

Looks a nice chance here and she could be worth following.

Cailini rarely runs a bad race and she looks a top chance in what is an even betting field.

The Gollan-trained mare comes into this having finished second at Eagle Farm last start. That form should hold up nicely here and it’s not the strongest field in the world.

She will be having her sixth run of the campaign and with 55.5kg on her back, her turn-of-foot should be on display.

Punters will have to take the shorts with Soxagon but it looks money well placed.

The Currie-trained four-year-old has won his last two starts with ease and he could easily win again.

He scored by 2.3 lengths as the odds-on favourite two back and repeated with a 2.5-length win at Eagle Farm.

He has placed twice from two starts at Doomben and he could go one better here.

Macewen has hit top form with consecutive wins and he has looked good in the process.

His first win came by 2.8 lengths at Eagle Farm and he doubled down to win again by 1.3 lengths last start.

He’s able to sit back in the run and use his turn-of-foot to fire home late. That’s always a good trait to have and 54kg on the back is a big bonus.

Guntantes showed his class when winning two back at Eagle Farm, but was left flat-footed last time out.

He has been given a freshen up for this run and that bodes well for this. Punters should be expecting a better effort this time around.

Robert Heathcote lines up the son of Rothesay and punters are getting value odds.

Cody Morgan lines up the five-year-old which has won four of his 12 career starts.

He comes into this having won by over a length at Tamworth and that form should stack up nicely for this.

Gets the inside draw and he could dictate the pace. Chance with the right run in transit.

Kubis isn’t a spring chicken any more but the experience six-year-old still has winning ability.

The Heathcote-trained gelding scored back-to-back wins to open his account this season and he could get back to winning form here.

He was close up when running second at Eagle Farm last start and a similar run would take him close.

Trevelyan is a consistent type which has rattled off three consecutive second placings.

The four-year-old was a winner four back at Eagle Farm when beating a big field and that experience will do him plenty of good here.

Gets in nicely on the weights at 56kg and he deserves to be favourite.

David Vandyke lines up the four-year-old mare which has looked good winning three of her six starts.

The daughter of Congrats scored at big odds to kick off this campaign before running second at Eagle Farm.

Drawing barrier three is ideal and she should be right around the mark throughout.

Tambo’s Mate just keeps on winning and it could pay to follow him for the rest of the season.

The Stuart Kendrick-trained gelding has won six from 10 starts, including three of his last four.

All of his wins have been impressive and although facing a rise in class, he has every chance to win with only 54kg on his back.