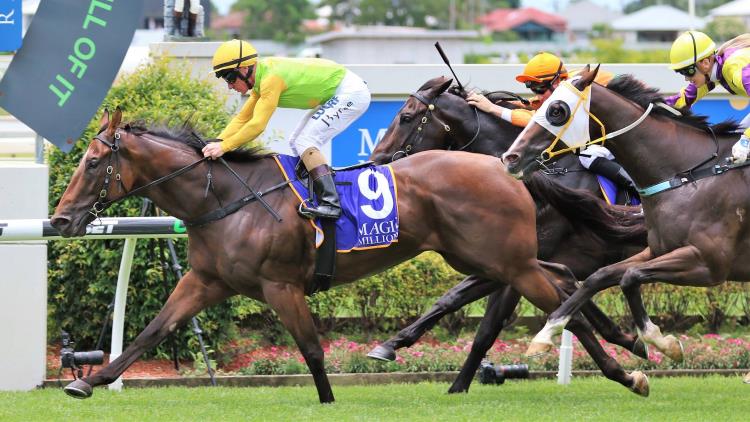 Brisbane racing returns to Eagle Farm this week where punters can bet into a nine-race card.

We have free tips, form and odds for every race on the Eagle Farm card this Saturday.

Sizzling Babe is too short at $1.45 so we’ll go with the value runner Just Cosmos. The Kris Lees-trained filly is by Dissident, which means she will improve with time.

Her debut run was a touch unlucky after she got checked approaching the home turn and that put her out of contention.

Might not come into this with stellar form after running 10th at Doomben last start but he has class and should be considered at a price.

The Tony Gollan-trained five-year-old had solid form prior to that which included placings behind I’ve Gotta Nel and Volkoff.

In good form for the Gollan stable after winning narrowly at Eagle Farm last start and he could continue in that vein of form.

The son of Star Witness has now finished in the first three in nine of his 15 career starts. That’s a consistent record and given his barrier draw of five, he’s going to get every chance to further that record on Saturday.

Another Gollan-trained runner which was a touch unlucky when becoming unbalanced last start. Her win prior to that defeat came at Ipswich by six lengths and there’s some things going in her favour here.

Jeff Lloyd rides with only 54.5kg on her back and although she’s facing some experienced types in this, she has more upside than most.

She should start around her advertised price.

Knocking on the door after two minor placings at this track and that experience is key for this race. She rises in weight after running second last start but she meets an easier field here.

She has finished out of the money in only four of her 14 starts and although she has drifted to $3.40 after touching $3, she remains the one to beat in this.

Drawn well and should get every chance to strike.

Having her fifth start of her first campaign which is never an easy task but she has looked more than capable of handling the situation.

She ran second behind Tatcee last start but it rises up 3kg and Rocknavar only rises up a half-kilogram. She also gets the inside draw in her favour and the daughter of Fastnet Rock should be tough to beat in this.

Chris Waller lines up the four-year-old gelding which runs at value odds here. He’s a son of Sepoy which has scored five wins from 15 starts and a roomy track such as Eagle Farm is only going to help his chances.

He drops down in weight from 57.5kg to 54kg for this and although the field contains better horses, he has beaten some nice types in his time.

Likely to firm on the day.

Couldn’t have been more impressive when winning by 2.5 lengths on this track two weeks back and a repeat looms for the five-year-old.

The son of Denman has now finished in the first three in nine of his 11 starts and the consistent runner should have a good chance to win again.

Jeff Lloyd retains the ride and only the wide draw is a concern.

Comes into this on the back of consecutive wins, which holds him in good stead for this. The first win came at Doomben by 2.5 lengths and he backed that up with a solid 0.8-length win at Eagle Farm.

Most of the early money has come for Reckless Choice and he looks the form runner of this field. Expect the $3.40 to shorten further.