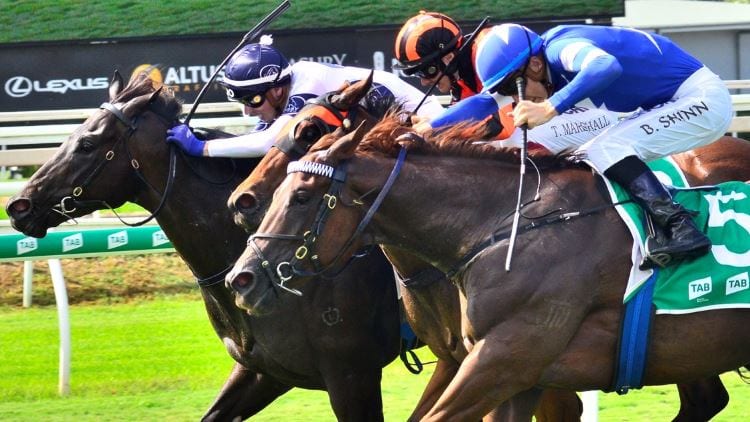 Racing returns to Eagle Farm where the Makers Mark Handicap is the featured race on the nine-race card on Saturday.

Jay Jay D’ar was scratched from a midweek meeting at Warwick Farm and was looking for better track conditions.

Gets them here and the Chris Waller-trained four-year-old could return to form. She ran third at Randwick last start behind Miss Invincible and that’s solid form.

That followed a win at Mildura as the odds-on favourite so expect a good run here.

Nick Keal takes some weight off the back of Boom Boom Epic, which has been in good form coming into this.

The five-year-old mare has posted back-to-back second placings at Gold Coast and Doomben in preparation for this.

She was a winner only three starts back at Eagle Farm and returning to this track looks ideal. She scored that by 1.5 lengths as a double-figure odds chance, but expect shorter odds here.

Punters have profited from Profit in two starts to date and he could remain unbeaten in this.

The Anderson/Heathcote-trained three-year-old scored narrowly on debut before making up big ground to win at Eagle Farm last start.

Connections have a big opinion of the son of Dundeel and we wouldn’t be overlooking his chances in this race either.

Betting should indicate his chances.

Stuart Kendrick lines up the five-year-old mare which has finished in the money in eight of her 14 career starts.

The daughter of Fastnet Rock ran well for second at Sunshine Coast last start when running a half-length behind the winner.

That should be good form for this and she’s going to get every chance off the inside draw.

Jagged Edge is another Kendrick-trained runner which has a nice future ahead of him. The three-year-old has won two of his four starts and he didn’t lose any admirers last start.

He finished fourth on this track behind Go Deep and he just settled a little too far back before battling on nicely late.

He’s entitled to improvement and if he can settle a little closer, punters should expect a top effort here.

Trevelyan is a consistent runner which has finished in the money in seven of his nine career starts.

The four-year-old gelding was a winner three back and it has been getting close to another win after consecutive second placings.

Drawing barrier three is ideal and Stephanie Thornton takes some much-needed weight off his back.

Exdream is a capable four-year-old for Kris Lees and he gets into this race nicely on the weights at 54kg.

The Dream Ahead gelding was a 1.3-length winner at Ipswich two back before running fifth at Eagle Farm last time out.

Always going to be difficult to beat in a race like this and it should be close to the pace from a good barrier.

Kubis is searching for three wins on the bounce after scoring back-to-back wins on this track.

The Anderson/Heathcote-trained six-year-old doesn’t know how to run a bad race with 41 starts, eight wins and 12 placings.

He’s in career-best form and he could easily handle the rise in distance and take out his third race in a row.

Snitz hasn’t won in awhile now but it should run at value odds.

The five-year-old has won five from 19 starts and has another five placings to boot. That’s a good record and although out of form, he could turn it around.

Gets a good run from barrier two and having senior rider Jim Byrne in the saddle helps.