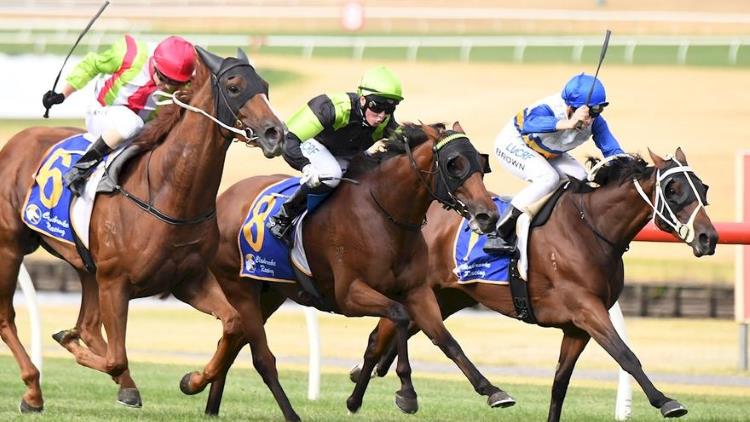 The night racing circuit continues this Friday night with cards from Canterbury and Moonee Valley, which includes quality betting fields.

We have free tips and form for the best bets across the night, which serves as a nice entrée before the Group 1 racing action on Saturday.

Chris Waller lines up the two-year-old which ran fifth behind Dawn Passage on debut and that form stacked up nicely in the Inglis Millennium earlier this month.

The filly by in-form sire Zoustar was 5.7 lengths behind Dawn Passage but this is a maiden affair and having James McDonald in the saddle is a good sign.

Tough field but there should be good interest come race night.

That was a wonderful run from Mizzy when finishing third behind Fiesta and 2018 Golden Slipper winner Estijaab last time out.

Although she’s a filly which has yet to win from nine attempts (five placings), she has been around some of the best throughout her career and she should go close to scoring an overdue win in this.

55kg helps and despite there being some progressive types in this field, we’re not expecting big odds from bookmakers.

Impressive debut winner who is making a substantial rise in class but that shows how much confidence Greg Ryan has in the filly.

She’s a well-bred daughter of Snitzel which won by just under a length and she has been kept up nicely after winning a trial at Rosehill recently.

54kg is a bonus and although she’s giving away experience, she could be one to watch in the future.

Going a little wide here with the five-year-old which has won four from 32 starts and although he was dismal last time out, he could shock them here at big odds.

He was much better when running second at Warwick Farm two starts back and he blundered the start last time out, which didn’t help his chances.

If he jumps with them, he could show up at nice odds.

Lindsay Park lines up the talented three-year-old and despite being defeated at her last four starts, we’re sticking with her.

She’s a daughter of Street Boss which ran a half-length behind Fine Dane at The Valley last start but she could reverse those placings with some luck in running.

She gets the weight advantage over Fine Dane and that could be enough to turn the tables.

Impressive albeit a narrow win at Sandown last start but it came over a few of these and she might have a chance to repeat.

The daughter of Magnus had been running consistent races without winning but she capped off that form nicely and she could go back-to-back.

Each way odds should be on offer throughout the field.

Sticking with the four-year-old gelding which has been a touch disappointing his last two starts but he was impressive winning consecutive races prior to that.

The Robert Kingston-trained runner scored by just under two lengths at Kilmore before repeating the dose at Mornington as the odds-on favourite. His last two starts have come against better opposition and he has struggled but consider in this grade.

He has also had excuses for those efforts and the inside draw suits him perfectly.

The Lindsay Park-trained runner has been painful for punters at her last four starts, placing in all and running second at her last three, but she could turn that into a win.

She’s a daughter of Heart’s Cry which ran five lengths behind the winner last start but she still defeated the majority of the field home and it was a strong staying affair.

Gets some weight relief which will help her chances.

Looked good last time out when running second behind Humma Humma and she gets the better draw than her race-rival here.

The Matt Laurie-trained filly was a winner at Flemington two back against a field of 17 and that form is going to stack up nicely throughout the autumn.

There won’t be much between this field but she should run well.