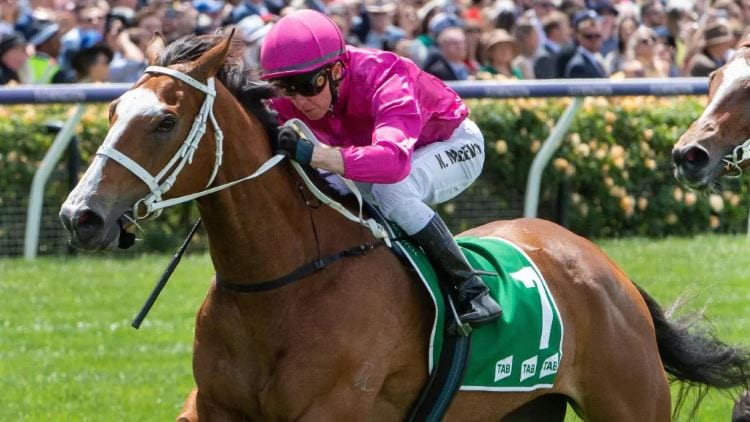 The Chester Manifold Stakes is the feature race at Flemington on Saturday. It has long been a good form guide for the autumn.

Punters are getting even betting fields across the Melbourne card and we have our best value bets.

Hungry Heart runs on debut for Chris Waller and there is plenty to like about the breeding.

She’s a two-year-old filly by Frankel that has looked good at home and should go close to making a winning debut.

John Allen takes the ride from an inside barrier and that often plays well in the early races down the Flemington straight.

Watch for any late betting moves in her favour.

This is an amazing field for early January and Rubisaki is one of the reasons why.

The Patrick Payne-trained three-year-old filly fired up last start when scoring by 2.5 lengths at Moonee Valley.

She wasn’t expected to score so easily but her form from last the season prior was terrific. She finished ahead of some nice types when winning three of her five starts.

Rubisaki is yet to finish worse than second in her career and we’re expecting that to continue in this race.

That Girl has been expensive for punters this preparation but at little fault of her own.

The Phillip Stokes-trained sprinter scored by 1.8 lengths on debut at Morphettville and has since run two second placings at Pakenham and Flemington.

She chased gamely behind the talented Alburq last start and that form looks very good for a race like this.

Drawing down on the rails might not help her cause but she’s too good to overlook and another win should come soon.

Greg Eurell lines up the five-year-old that started his last campaign with an almighty bang.

The son of Dash For Cash scored three consecutive wins when resuming from a spell and that should hold him in good stead for this.

The first win came at Sale against solid opposition but his two wins at Sandown and Flemington were quality outings.

He lost no admirers when running second behind Romancer last start and we’re confident about his chances in Race 4.

Neighbourhood is flying this season and she could add another win to her improving record.

The four-year-old mare has been putting her opposition away in three consecutive wins, including a gutsy win as the odds-on favourite last start.

That win came at Caulfield and she’s going to be better-suited running at Flemington, despite her record not suggesting as much.

She has had three starts for two placings at Flemington. Those came behind the likes of Fidelia, Fabric and Heavenly Emperor, so nothing lost there.

There was a strong betting push for Future Score last start when he battled on well for second.

Prior to that, he had won his last three starts and the imported son of Cape Cross has plenty of improvement to come.

His second-up record didn’t read well and he always improves with two runs under his belt, so his fitness levels should be prime for this.

He jumps off the inside draw and that should see him land close to the pace.

Bumper Blast is a professional winner of three from five starts and he will be tough to beat in the future.

Trained by Robert Hickmott, the impressive four-year-old scored by a nose on this track in December and has been given a freshen up for this.

He was a winner on Oaks Day at Flemington as well when beating a solid field. That form is going to make him tough to beat this season.

Chris Waller lines up the talented mare that has won five of her 18 career starts.

The four-year-old mare by Snitzel does rely on luck in the running as she comes from the back. However, when she’s on her game, she can be tough to beat.

Dropping to 54kg is going to make a big difference.

Former Kiwi runner Copper Fox made a good impression when winning at Sandown last time out.

The five-year-old gelding scored by just under a length and his form in New Zealand would be good enough to win this.

Drawing barrier 15 isn’t a big deal down the Flemington straight so include him in selections.