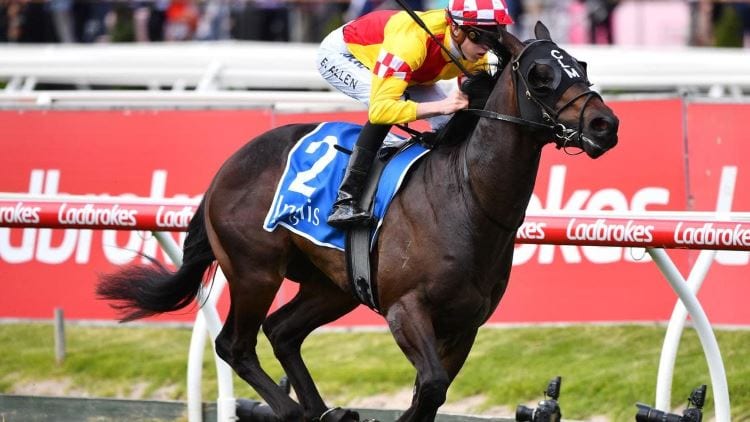 The Golden Gift is a new $1 million on the schedule and it should be an exciting race.

17 quality two-year-old thoroughbreds will take part at Rosehill this Saturday and there are some high-profile juveniles in action.

We have done the form to find our best bet, best each way and best roughie selections for the 2019 Golden Gift.

Impressive win on debut and having race experience is going to be big in a race like this.

Should enjoy using the rail to his advantage and there is good confidence in the market.

These races are tough to gauge but he looks to have more ability than most.

Ran well enough for third on debut but drawing barrier 15 is going to make it tough.

There is going to be a stack of speed, so he’ll either need to work to cross the field and rely on luck at the back.

Either way, it doesn’t bode well for his chances.

The Sebring colt ran well on debut at Randwick when finishing a length behind Time is Precious.

That form should stack up nicely in this contest and if he can find some cover from barrier 11, expect Gravina to be around the mark.

Finished sixth on debut at Moonee Valley but the run was better than it looked.

The colt by Snitzel was under a length behind the winner Ideas Man, which looks a nice type in the making.

Goes the other way around here but respect its ability.

Fourth on debut at Randwick but it was only a six-horse field and he finished 2.6 lengths away from the winner.

Would need to improve on that performance.

Didn’t do anything on debut and winning this would be a stretch.

Big odds on offer and rightfully so.

On debut for Peter and Paul Snowden after winning two trials to prepare for this.

The colt by Criterion won his first trial by 6.5 lengths and backed that up with a one-length win at Rosehill.

Drawn barrier 10 and if Tim Clark heads forward, he’ll be awfully tough to hold out.

Another quality trials performer which spaced them in a recent trial at Rosehill.

The two-year-old by Choisir scored by 6.8 lengths late last month and he only needs luck from an outside barrier.

Has been backed in from an opening quote of $51 after running second behind Blaze A Trail at the trials.

That’s good trial form for this and he has drawn ideally in barrier five.

Could run a nice race and he’s over the odds.

Race winner when scoring at Randwick by a narrow margin. She stormed home in the small field and that’s a good sign for the future.

What isn’t a good sign is barrier 16. It’ll be tough from out there, regardless of her ability.

Had backing on debut when running second behind See You Soon. Didn’t lose any admirers with that run, so keep safe here.

Drawn much better than See You Soon and with only 54.5kg on her back, she could fire up and add some value to multiples.

Not going to be helped by the wide draw and that was a disappointing effort on debut.

Smart filly with some more time under her belt.

Showed very little on debut and it’s tough seeing her turning that run around.

Would need to find a few lengths to keep up with them.

Nicely bred type by Hinchinbrook x. Our Egyptian Raine which could find some good pace fresh up.

Drawing barrier 17 all but puts an end to her chances, but stranger things have happened.

Punters should always respect a James Cummings-trained runner and the colt looked solid at the trials.

He finished second behind Tanker at the Randwick trials and from barrier six, he’s going to get a good run in transit.

Worth including in selections at the odds.

Trial form is only fair and she’s unlikely to trouble them here.

Unlikely to get a run in the race.