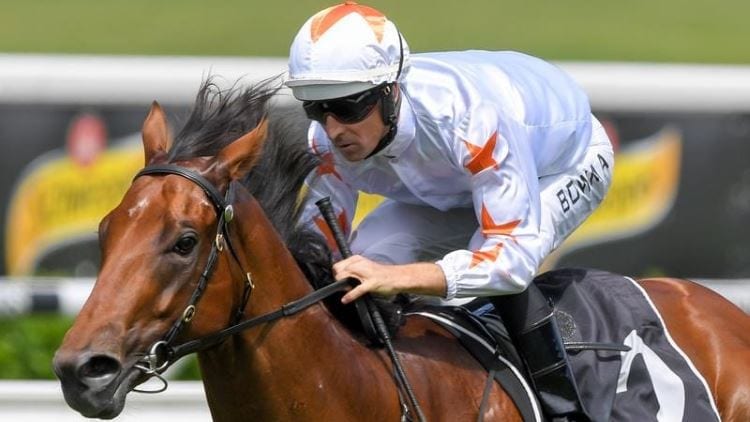 The world’s richest 2YO race runs at Rosehill this Saturday, and we have our best bets for the 2020 Golden Slipper.

A full field lines up for the big prize and a wide-open market is available for punters. We look at the best bets for the feature Group 1 contest.

Our best bets for Golden Slipper

The Blue Diamond winner ran 1.8 lengths behind Farnan last start, but didn’t lose any admirers. It was his first run in Sydney and he’s going to be better for it.

Conditions look ideal and although he’s not in our top picks, he’s a legitimate first four hope.

Hanseatic hasn’t been seen since running second behind Tagaloa in the Blue Diamond. However, his form prior was terrific and he’s a high-class animal.

The son of Street Boss has won three of his four starts, and has been primed with a trial win at Randwick. That’s key, and the odds are too good to pass up, given how dominant Godolphin has been in 2YO races.

Farnan looked ultra-impressive when winning by 1.8 lengths at Randwick last start. He led the field and kicked clear in the straight, which is great form for the Slipper.

He has drawn barrier 14, which makes it harder, but he owns good barrier speed and Hugh Bowman takes the ride.

Punters are getting good odds for the favourite.

We thought Prague would be much shorter in the betting, so we’ll happily take the $13 on offer. The Maher/Eustace-trained colt was electric when beating Kumasi last start.

It has his third win from four starts, and that form is tough to look past. Take the value odds.

He finished fifth in the Magic Millions but there wasn’t much to like about his recent trial. He finished sixth at Randwick, and although he has drawn well, there is no betting support.

Entertain his chances if there are late betting moves, but none at this stage.

The colt was impressive winning on debut but he’s giving away experience to most of this field. He won by 1.3 lengths at Randwick, which followed two trial wins.

There’s no doubting his ability, but we just haven’t seen enough of him to warrant inclusion. He could easily win, so don’t leave him out of calculations completely.

Away Game went close to being the best roughie selection. The Magic Millions winner backed up that run with a game finish for fourth in the Blue Diamond.

She was forced to sit wide throughout the run, but she still managed to battle on behind Tagaloa and Hanseatic. It’s a good form guide for the Slipper and we’ll happily take the $14 on offer.

The filly scored a narrow win at Randwick last start and she has talent, but we wouldn’t be taking single-figure odds.

The majority of her form has come against horses at lower levels than what she faces here, so we would need double the price to entertain her chances.

See You Soon holds the same form lines as Dame Giselle, except she’s at better odds. She should have won last start, but was narrowly beaten on the line.

Her future is bright and we wouldn’t out her chances. Expect the $13 odds to drift a touch.

Mildred owns plenty of barrier speed, which will be needed from barrier 17. She’s only a small filly, and that doesn’t often bode well in the Golden Slipper.

It’s a rough race and she’s going to struggle to find a spot from the wide barrier.

Personal is a one-race winner, which came at Flemington second up. Her only run since came at Caulfield when running third in the Blue Diamond, so there is merit in her form.

Her trial at Randwick was encouraging and although others have more scope, she’s not without a chance at odds.

She was heavily-backed to win at Flemington last start and she couldn’t get the job done. It was a step backwards in her campaign, which is why she has ballooned out to $61.

Hungry Heart defeated Stellar Pauline last start, but that form hasn’t stacked up overly well. However, it was an impressive performance to come from the back of the field, so we’re not ruling her out.

She’s a well-bred filly by Frankel, so look for her over more ground. The Sires’ Produce might be a better race.

The jury is out for Cellsabeel, which has looked brilliant at times, but average in other starts. The brilliance came when winning by six lengths at Rosehill.

However, her form tapered off against harder opposition, so she’s too risky to back.

Never rule out a James Cummings-trained runner, as punters learned last week when she won at odds of $21.

The daughter of Exosphere came from midfield to win in the heavy conditions, but doing that in consecutive weeks is tough.

As the odds suggest, he doesn’t have much of a winning chance. His form isn’t flash and he’d need to improve lengths to win.

Minhaaj is a sneaky chance at running well. She won easily at Flemington when beating Muntaseera comfortably by 4.5 lengths.

It was a professional display and that followed a debut win by five lengths at Bendigo. Her class is evident and with a good ride, she comes into play.

It’s unlikely to run in this race, hence the odds. If she gains a start, she shouldn’t factor into the finish.

Unlikely to run and win.