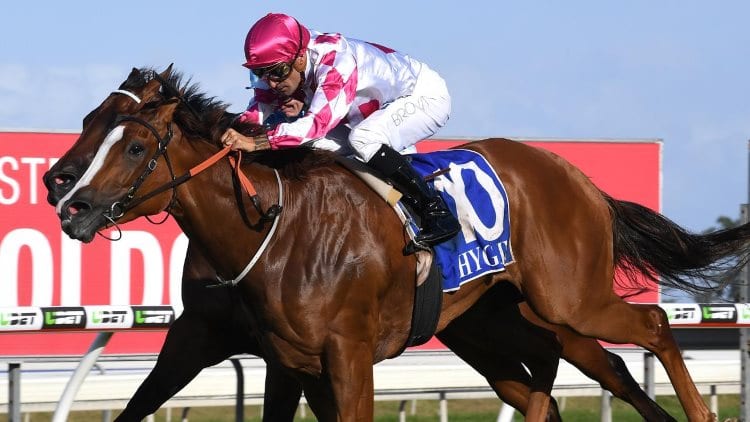 Flemington and Rosehill host nine-race cards this Saturday and we have free tips and form for the best races on the card.

Group 1 racing isn’t that far away and many of the horses engaged this Saturday are looking to push for a run in the big races this autumn.

The Lindsay Park-trained colt was too tough for them on debut at Geelong when scoring by 3.3 lengths and that form should follow through to this.

A well-bred son of Fastnet Rock, the two-year-old meets a field which doesn’t appear to possess many superstars and he could take advantage.

Always tough to beat over the staying distances, Lycurgus has the class edge over this field despite his lack of recent winning form.

Trained by Danny O’Brien, the five-year-old is not lacking experience with 33 starts for six wins and nine placings. That should be enough to get him over the line here and he’s weighted perfectly at 56.5kg.

We thought he would be around the 58kg mark given his record.

It took a while but Beerz With Clint finally showed punters why he was well backed early on in his career. The three-year-old scored convincingly at Moonee Valley last start by 4.3 lengths and that will do his confidence plenty of good.

The son of Written Tycoon has always shown ability but never put it together. This looks a good chance to rise up in grade and take home the riches.

Champagne Cuddles returns having not raced since running 14th in the Group 1 Epsom Handicap. Always a better chance at the sprinting distances, the four-year-old mare won her only start at 1000m.

She has been primed with a trial placing at Warwick Farm and given her class, she should be going close to winning this race and the odds reflect that.

She will be running through many multi bets this Saturday.

Langhro finished second behind Star Fall last time out, which has subsequently won in Sydney and that form looks good for this.

The Mick Price-trained gelding scored consecutive wins at Bendigo and Wangaratta by a combined margin of 9.5 lengths before coping well when rising in grade.

He’s not the best horse in this field but he gets in at 54.5kg and some of the other good types are carrying in excess of 59kg.

Igniting looks like a potential Slipper contender after finishing second on debut behind Movie Role and that form should stack up nicely.

The two-year-old colt might not have the stellar breeding that some others possess but he will take good benefit from his debut outing and that came following an easy trial win.

He drew barrier 10 on debut and drawing closer to the rail is a bonus for this.

That was an impressive win by Ljungberg last time out at Randwick when scoring by 3.8 lengths and he hit the line with plenty in the tank.

Ron Quinton lines up the talented three-year-old which hasn’t been tested against much but there are no superstars in this race and he should be tough to beat again.

Expect his current odds to drop.

Was a boom horse last campaign when scoring three consecutive wins at Rosehill and returning to this track should help the gelding regain his form.

He didn’t have the ability to keep up with the likes of Hartnell and Siege of Quebec when rising up in grade but this suits better and he has enough class to win at this level.

Four-year-old mare Sweet Scandal is a nice type which was unlucky when fresh up before running a fair fifth two back. She turned that form around with an easy two-length win at Randwick last start.

That win is a good guide for this and there has been plenty of money come for her late. That’s a good sign and the four-time winner from eight starts could continue her winning ways.

Ciaron Maher and David Eustace have this four-year-old gelding running very well this campaign. The four-year-old has yet to finish worse than second in five attempts this preparation, which is a great effort.

He makes another rise in class for this but he’s rising through the grades nicely and he should go close again.