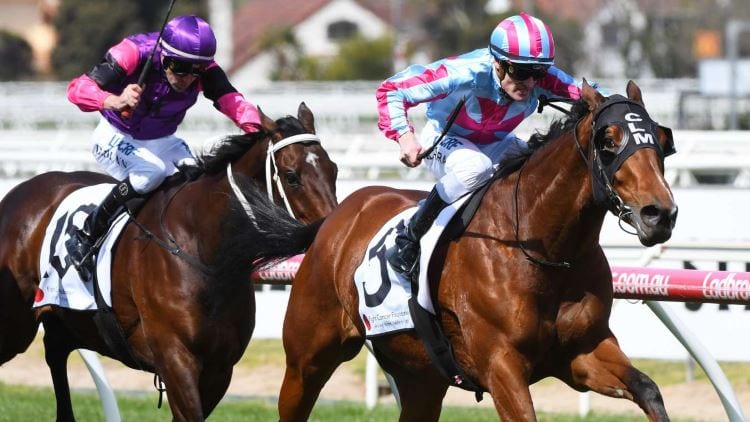 Punters get to invest in some quality stakes-racing action this Saturday with meetings from Randwick and Caulfield.

We have done in-depth research to find our best bets across both meetings and with so much racing on offer over the next few days, the bookmakers are giving us some great value offers.

That was an impressive win at Moonee Valley on debut and with over $300,000 in the bank, connections are already having the time of their lives.

The daughter of I Am Invincible scored by two lengths and has since won a trial at Randwick, which bodes well for this.

Having that experience around Randwick is key and she looks a good bet to open the card.

She’s Spicy looks tough to beat in the Highway Handicap following a second placing at Doomben behind Winter Passage. Prior to that, she had won two of her previous three starts in fine fashion.

The daughter of Real Saga scored by 2.5 lengths at Doomben and 3.5 lengths at Gold Coast. Those were some demanding wins and we think her odds are only going to drop significantly for this race.

The talented filly scored carrying 59.5kg last time out at Canterbury and dropping to 55.5kg is going to help her significantly here. That was her third consecutive win and all the early money has been placed on her.

Tough race, but she could be one for the future.

Only narrow beaten last time out, the Matthew Dale-trained mare gets into this race well off on the weights at 55.5kg.

She’s a four-time winner from seven starts and it took a game Heart Conquered to get past her last time out at Randwick.

Tricky field here again but she has the class factor on her side and punters are getting a fair price.

Value runner with some luck from a tricky draw. The James Cummings-trained five-year-old finished sixth fresh-up at Doomben but has been primed with an impressive trial win.

That came at Rosehill by 1.8 lengths and he has always been a confidence runner, so having that recent trial success under his belt helps.

Likely to push forward and be in the race for a long time.

Mick Price lines up the three-year-old filly which cracked the code last start with a win at Moonee Valley by 1.8 lengths. That was her second career win after saluting at Flemington on debut against a tough field.

Her only defeat came at Morphettville behind Marcel From Madrid but that’s stakes form and we’re prepared to forgive that effort.

Looks well-placed here with only 56.5kg on the back.

Showed punters his true class when scoring at Caulfield by 2.8 lengths last start and if he can carry on with that form, he’s tough to stop here.

The Hawkes-trained son of All Too Hard is unbeaten on this track and the change in surroundings clearly helped his cause. He could kick on with it now and although $3.10 is on the shorter side of value, it’s worth taking.

It’s not going to be easy from barrier 13 but it was hard not to be impressed with the debut win of Microphone, which flashed home late down the outside of runners.

The same tactics might be needed again after drawing deep and Caulfield isn’t a track where horses can track wide without cover and win.

Punters will be taking a risk but he clearly has talent.

Another of the top Blue Diamond horses which have drawn deep, but this filly has plenty to offer on the track.

The Snowden-trained two-year-old won the Gimcrack by 2.8 lengths and the form out of that race has stacked up nicely. She has since won a soft trial at Pakenham and with some luck from barrier 14, she should be right in the thick of the action.

Al Galayel has been a punters’ dream this season with four wins and two wins on the bounce coming into this.

The imported stayer continues to beat the handicapper and has again here, carrying only 55.5kg despite winning by a half-length at Moonee Valley in open class last start.

He has been a recipe to print money this season and we’re happy to stick with the five-year-old.

Looking for three consecutive victories is Silentz, which scored nicely by a length last start at Flemington and was hitting the line powerfully.

He’s a gelding by Snitzel which has won seven of his 16 starts and he scored his only start at Caulfield when scoring by a half-length two back.

He’s in good form and there’s no reason to jump off his back.