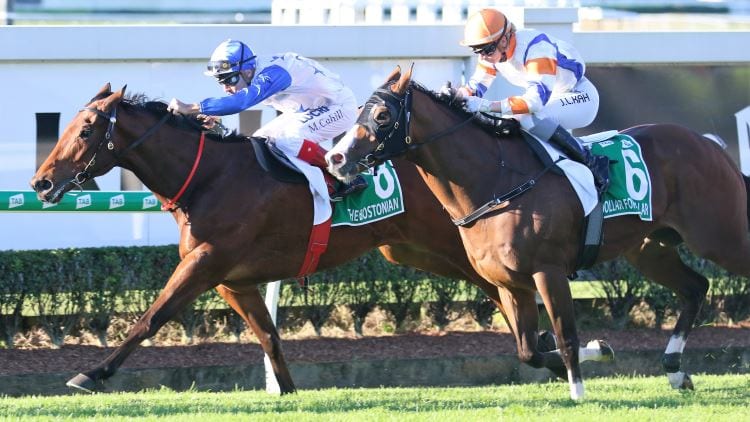 Group 1 action out of the Brisbane Winter Carnival continues this week with the Kingsford-Smith Cup at Eagle Farm.

We have expert betting tips, form and odds for all 18 sprinters lining up in the feature race this Saturday.

Our best bets for the Kingsford-Smith Cup 2019

Showed good form when winning consecutive races last campaign but he has never been a Group 1 type.

Only fair at Scone last start and we’re expecting him to be there at the turn but battle down the straight.

The Kiwi runner scored a big win in the Doomben 10,000 and there’s no reason why that’s not the best form for this.

He’s taking on an easier field and although his form back in New Zealand was only fair, he grows a leg in Queensland.

Nice odds on offer for a quality sprinter.

Very consistent runner which ran second last time out and specking has come for him during the week.

Good effort for second at Scone last start and he deserves some attention at the price.

Impressive three-length win to kick off this campaign but was well-backed and ran only fourth last time out.

He’s backing up a week later, which might not be ideal and he doesn’t look a Group 1 type.

He needs a few things to go his way to take this out.

He’s typically an underrated type which is coming off a third placing in the Doomben 10,000. That was a nice effort and he has run well with two runs under his belt.

Drawing barrier 12 could make it tough to find a nice position but he’s a battler and should be considered at each-way odds.

James Cummings-trained runner which has looked good winning his last two. Those came at Randwick and Scone, but does face a significant rise in class here.

He’s an obvious winning chance but the $6 is a little short for our liking and we’re prepared to risk him.

Imported runner for James Cummings which has looked good at times and only fair at other times. One of those fair runs came last start in the Hall Mark Stakes.

It wasn’t quite the effort we’re used to and we’re not sure he’s going well enough to turn that around.

Kiwi-trained runner which scored a big win at Ellerslie last start in the Easter Handicap. He’s a former Australian which scored a good trial win at Doomben to prepare for this.

Conditions should suit and although he’s paying $41 to win, he represents some value in this.

He’s a Perth-based runner which struggled to make an impression at Doomben last start and he’s not quite at Group 1 level.

Prefer to see him in something much easier.

Yet to win since transferring to the Waller stable but her performances haven’t been too bad.

She finished third fresh up and hasn’t been too far away since. A similar run could see her in the finish and there has been some money come for her during the week.

Ran two consecutive fourth placings in Sydney prior to this and he recent trial form has been positive.

The three-year-old gets some weight advantage here but isn’t ideally weighted at 57kg. He could struggle to have the class to match up to these.

Coming off a big win at Eagle Farm in the Group 2 Victory Stakes and that form could stack up nicely for this.

She has always been a talented type and the six-time winner has the turn-of-foot needed to win at the Group 1 level.

Drawing barrier nine isn’t too bad for her and we’re expecting a big effort.

Good performance to win earlier this season but her efforts since have been poor at best.

She’s struggling to find her best form and it’s unlikely to come in this grade.

Ringerdingding is coming off an overdue win at Randwick and he looked good running a close second at a recent trial.

He’s a quality three-year-old which gets James McDonald in the saddle and that has prompted punters to come for him.

Controlled the pace nicely to score at Hawkesbury last start but she had everything go her way. That’s unlikely to happen here and she would need a light weight to be a factor.

3.2 lengths behind The Bostonian last start and it’s hard seeing her making up that ground.

She has the ability to cause an upset but none of those have come at Group 1 level.

Didn’t have much luck when running fifth at Doomben and punters should load up again at the double-figure odds.

She’s a quality type at her best and if Jeff Lloyd can give her a good run in transit, she’s going to be tough to beat.

Coming off a nice win at Doomben but this is another rise in class altogether.

Likely to struggle despite the light weight.