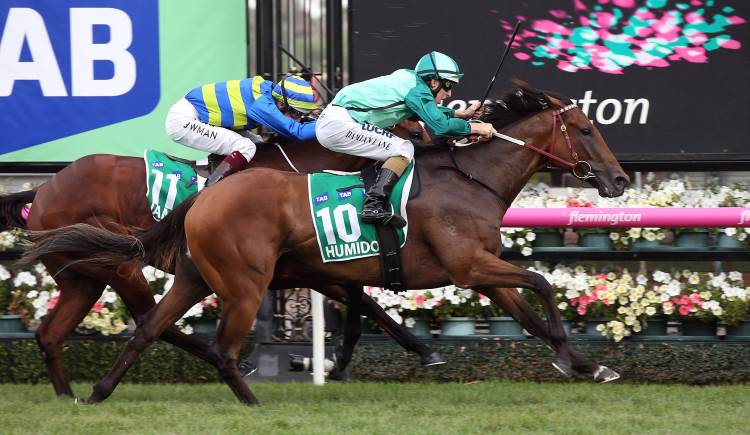 Group 1 racing continues this Saturday at Rosehill with the Coolmore Classic, which is the feature race on a cracking betting card.

Autumn racing is in full swing and as The Championships near, the best horses in Australia are starting to hit top gear.

There are no major races at Flemington but it’s a great supporting card for Rosehill and we have form, odds and tips for the best bets across both meetings this Saturday.

That was a huge run from Libran last start at Randwick to finish 8.5 lengths behind Winx.

He was never a chance of winning but the purpose of the run was to get him fit for the staying races later in the season.

One of those races pops up here and the seven-year-old, which has won three of his five second-up starts, looks in fine fettle.

He had been given the tag as a wet tracker last season but he has eight wins on a good track and he’s going to enjoy carrying only 56.5kg, which is going to make it tough for the current favourite Stampede.

This is a competitive field of two-year-olds but we can’t look past the form of Sunlight.

The Magic Millions winner has won her last four starts, including a win at Rosehill last start over subsequent winner and Golden Slipper fancy Estijaab.

That win signaled her intentions this campaign and unless she strikes some bad luck from barrier nine, we can’t see her losing this.

$1.50 is short and we’ve been burned by odds-on favourites in juvenile races in the past, but she will be running through every multi-bet on Saturday and with good reason.

We loved the look for Written By in the Blue Diamond Stakes and he didn’t let us down.

The Graeme Begg-trained colt has remained unbeaten after three starts and his 2.5-length win at Caulfield from barrier 15 was simply outstanding.

The ride from Jordan Childs was even better and the son of dual Cox Plate-winning jockey Greg Childs is starting to enjoy some good rides.

Drawing barrier four is going to give him the perfect run in transit and although he’s going right-handed for the first time, not much is going to get in the way of this talented colt by Written Tycoon.

Shumookh is a talented three-year-old which has run into some superstars so far this preparation.

The Waterhouse/Bott-trained filly ran second behind Alizee two back at Randwick before running third behind Shoals last start.

Despite still being in her first campaign, she faces a drop in class for this and if she can dictate the pace up front, as the Waterhouse runners like to do, she could kick away in the home straight.

She gets a weight advantage over the colts and geldings, so her odds look on the money.

We’re the biggest fans of Tom Melbourne and we’re never going to stop backing him… until he wins!

The Chris Waller-trained seven-year-old has placed on 10 occasions and although he hasn’t won for some time, having placings behind Happy Clapper and Shillelagh is better form than many of his rivals this Saturday.

He goes well fresh up with six starts for two wins and two placings. He should get a good run from barrier four and his trial form leading into this race has been good.

Keep the faith with Tom as he’ll repay punters this campaign.

Hear The Chant loves running down the Flemington straight and she comes into this following a win last start.

The Lindsay Park-trained four-year-old mare has always had stakes-grade talent and although she has been found out at the top levels, this is a nice class to target and should could capitalise again.

Drawing barrier two down the straight can be tricky, but it’s early in the day and that’s a positive.

The rise from 55.5kg to 59kg is going to be the test for Scarecrow this week, but he demands respect after the start to his career.

Having won three of five starts, the Tony McEvoy-trained three-year-old is trending in the right direction and he defeated a similar field last start.

His start prior was behind Grunt and the form out of that Flemington race has stacked up well.

There’s some trepidation in the market at $3 after opening at $2.75, but he’s a class type worth betting on.

Demerara is a professional winner of four from six starts and her two-length victory at Moonee Valley last start was superb.

Trained by James Cummings, the three-year-old by Commands has tasted defeat only twice and those efforts were behind Blondie and Jorda.

That’s strong form for a race like this and she looks to have more flat speed than most of these.

We’re expecting late money to come for Humidor, which pushed Winx to within a half-length in the 2017 Cox Plate.

The Weir-trained former Kiwi finished fourth behind Brave Smash fresh up this campaign and he only improves with racing under his belt.

His record second-up comprises of four starts for two wins and one placing. That’s going to take him close and although Tosen Stardom will present a challenge, Humidor is all class and ready to make an impact this autumn.

Overshare looks a great bet in this race after scoring an impressive win at Caulfield last start.

The three-year-old ran a quicker time than Blue Diamond winner Written By and even though he’s an older horse, it was still impressive time.

Drawing on the rail over 1400m is only going to help his chances and after opening at $5, it’s not surprising to see his odds firm.

He should go close in a big field.