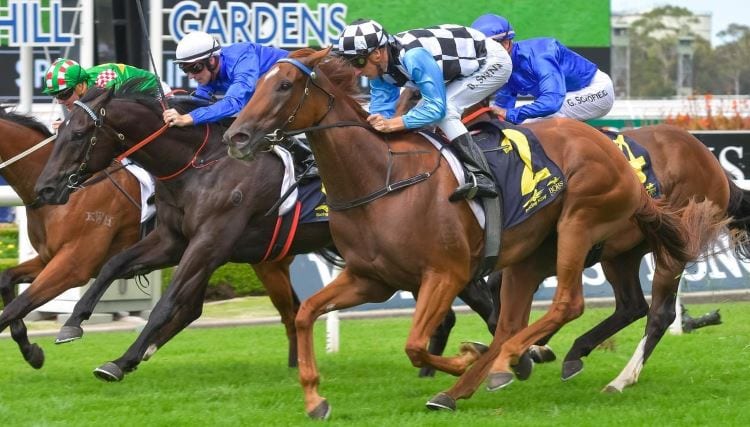 Golden Slipper day at Rosehill features some great Group 1 action, which we have covered on the site, but there’s some great betting races on the undercard as well.

It’s one of the best betting days on the Australian racing calendar and with Mornington chiming in with their Cup day card, it should be an exciting day on the punt.

The David Pfieffer-trained three-year-old has hit top gear this campaign, winning consecutive races and looking good in doing so.

A filly by Snitzel, I Am Excited scored narrowly at Rosehill two starts back before backing that up with a quality win at Randwick last start.

She’s rising through the grades nicely and although this field is stacked with stakes types, she shouldn’t have any problems handling them.

Karavali defeated a similar field last start, including current favourite Nettoyer, which is much shorter in the betting than Karavali.

The Kris Lees-trained stayer has run two good races this campaign and although she didn’t show much in previous campaigns it’s all about current form and she is confident at present.

$10 is well over the odds and punters are getting good value.

The track could well be rain-affected and Master of Arts would relish the conditions if so.

With a record of seven starts for three wins and three placings on wet ground, the Darren Weir-trained runner looks well-placed here and the money is coming for him.

He opened at $13 before the forecast predicted rain and he has since come tumbling in to $9. Still, that’s a good-value price.

We didn’t think Sugar Bella was going to get up last time out, but the talented mare sprouted wings late to nab them on the line.

The Lees-trained mare extended her record to six wins from seven starts in what has been an amazing career to date.

She seemingly doesn’t have any negative attributes and although facing her toughest test to date, she gets in well on the weights and she has wet track experience.

Expect her odds to shorten on the day.

The Ellerton/Zahra-trained four-year-old was no match for Sprightly Lass last start, but that has since crossed the line in first in Sydney.

Matty has always been a consistent type which has won three from six starts and he looks well-placed to get some of the money here.

Punters won’t get big odds for the talented son of Nicconi, but they should get a good sight down the Mornington straight.

Yet to win from four starts, Gheedaa is overdue a winning turn.

The Lindsay Park-trained filly finished third behind race-rival Louie The Legend last start, but she looks good enough to overturn that result.

Mornington should suit much better than Pakenham and Moonee Valley and the big open track should give the daughter of Hinchinbrook time to warm up.

She’s a smart two-year-old which just needs a confidence boost.

The former New Zealand runner is rising up in grade after running fourth at Flemington last start, but that was a hot field and this is no harder.

Now trained by Archie Alexander, the three-year-old filly showed how good it can be when winning at Moonee Valley two starts back and punters are getting good odds this time around.

She’s well weighted and looks primed for a good run.

The Tasmanian representative ran a slick 1000m time last start and stretching out over the longer sprinting distances has been been a worry for the five-year-old.

His record of 11 wins from 28 starts is impressive and we’re not worried about the rise in competition in Melbourne and he showed that he can handle it last start.

Kings Will Dream has been nothing short of professional since arriving in Australia.

The Weir-trained import has won all four starts and it’s hard to believe that he opened up at $3 for this race.

That price has been well and truly taken since and punters have every right to be confident in his chances.

He looks destined to run in some of the bigger cup races later this year and carrying 54kg is only going to make him harder to beat.

The Kiwi runner was a touch unlucky not to win at Ballarat last start, which followed a stylish win at Pakenham.

Trained by the Busuttin/Young stables, the five-year-old has looked good in recent starts and after some inconsistencies, he looks to have switched himself on nicely.

He’s another heavily-backed commodity and punters could get the chocolates in the last race of the day.