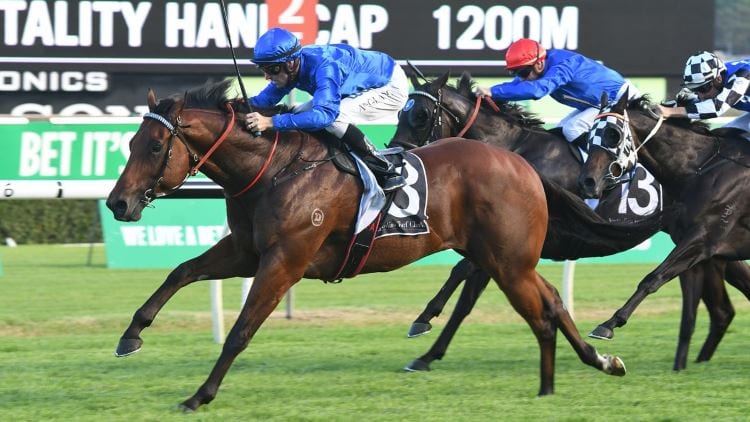 Group 1 racing continues at Morphettville this Saturday with the South Australian Derby.

The big betting field features some of Australasia’s rising staying stars and we have free tips and form for the best races on the Morphettville card.

Scone continues with its two-day carnival and there are some fantastic betting fields on offer for the New South Wales provincial meeting.

Darren Weir lines up Camdus which is fresh up after running at Flemington last year.

The six-year-old hasn’t been seen for 10 months but he typically runs well fresh up and his best form stacks up nicely for this grade.

The winner of six from 18 starts finished second at Moonee Valley behind Lord Da Vinci and anything close to that form sees him winning this.

Nice value on offer with the $3.50 and we rate him better than $3.30 favourite Falcool.

Running in the Magic Millions was too tough for the filly last start and this is a much easier target.

The Phillip Stokes-trained three-year-old scored consecutive wins on this track before moving around Australia and running into some hot fields.

She has been primed for her return with a 1.8-length trial win and that suggested that she’s back in fine order and is ready to win.

Tricky draw but she only needs a touch of luck to win.

Tatoosh was a big drifter in the market last start and he did well to finish third.

The Will Clarken-trained runner is much better suited back on this track where he is unbeaten after two starts.

His first win came in March when scoring by a nose but his most recent win on this track was an effortless 2.8-length win.

That was before he ran third at Flemington behind Life Less Ordinary, which has subsequently won the Hawkesbury Cup.

That’s strong form and the odds are appealing.

Darren Weir lines up a talented three-year-old here which was hitting the line with purpose when winning last start.

The colt by Animal Kingdom has form behind the likes of Grunt in Melbourne and he has always indicated that he could take out a stakes race.

He gets in well on the weights at 57.5kg and although punters will have to take an odds-on quote, he will be included in many multi-bets throughout Australia.

There was a stack of money for Desert Lashes last start when finishing 10th behind Sprightly Lass and although disappointing, she could bounce back.

The four-year-old mare is a nine-time winner from 15 starts and that consistency makes her a winning chance in this.

She is drifting in the market and punters should get some good value.

Cradle Mountain is in hot form after four consecutive wins this season.

The Clare Cunningham-trained four-year-old scored by 3.3 lengths at Randwick last start as the $1.8 chance and punters will be taking short odds again.

There are some nice types in this field, including Malahat, but Cradle Mountain has the best credentials to win and he could score his fifth straight win in style.

John O’Shea lines up Pretty in Pink, which scored nicely on debut at Gosford.

The classy two-year-old won on its ear by 2.5 lengths and that won’t be the last win from the daughter of Sebring.

Finishing second in that race King, which scored a quality midweek win on Wednesday and punters have already bet her in from $6.50 to $5.

That’s a solid move and she demands respect.

Moss Trip is an enigmatic type which scored in the Group 3 James Carr Stakes last time out.

That form is going to take her a long way throughout her career and she only needs to find some consistency to go to the next level.

The three-year-old filly finished fifth behind Shoals at Randwick in the Surround Stakes and that form has been franked since.

She will get back in running and she should fly home with a light weight on her back.

Osborne Bulls is the next big thing in Australia but he does need things to go right during the run.

Due to his racing tactics of getting back, he does need speed up front and some luck in the straight, which is what cost him the win last start at Randwick.

He could well be unbeaten from nine starts and he’s going to be awfully tough to stop with only 53kg on his back.

Expect jockey Rachel King to settle closer to the speed and get him into the clear at the top of the straight.

That was a strong effort for second behind Moss Trip last start and that form could be franked earlier in the day.

The Hawkes-trained three-year-old filly scored a good win at Newcastle prior to running in the city and although she wasn’t able to win, she faced the likes of Houtzen and Moss Trip.

Should find this level of racing suitable and she represents value.