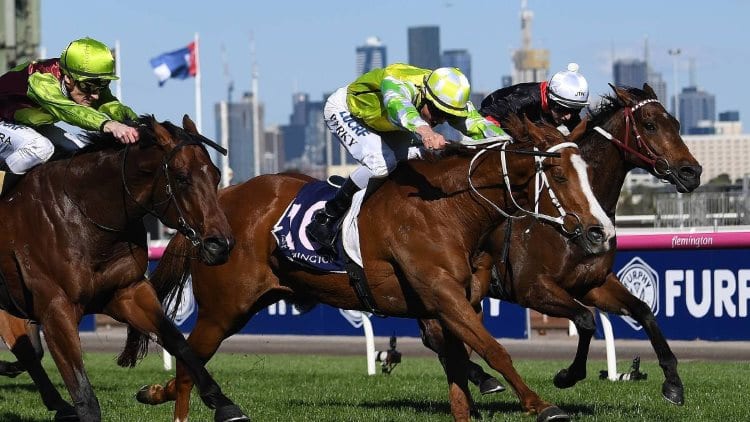 The quality thoroughbreds are out in force at Moonee Valley this Saturday and we have tips for every race on the card.

The Holy One makes a rise in class after scoring consecutive wins in midweek grade.

He’s a three-year-old colt which scored by 1.5 lengths last start. That followed a 3.8-length win to break maidens at Echuca.

Tough to line up the form in this race but he looks a handy type in the making.

Junipal is a last-start winner which could kick on with it now. He scored a 1.3-length win at Moonee Valley last start and he could remain unbeaten at The Valley.

Trained by the Maher/Eustace team, the four-year-old will need to carry a big weight but he has the class to beat this field.

There’s not much depth to this 1600m race and he looks a good bet.

Imported runner which worked home nicely last start and should only get better with more racing.

Trained by Liam Howley, the former European runner finished a length behind Guizot in a tight finish and that form should stack up nicely.

Dropping down to 54kg is going to be a massive help and although The Valley can be a tricky track to see for the first time, he looks to have class.

Haut Brion Her is a smart four-year-old from the Waller stable and she looks a good chance of winning this.

The well-bred daughter of Zoustar is a winner of four from five and her only defeat was a second placing behind Zalette.

It’s tough to overlook winning form and we’re happy to stick with her until she shows us something different.

James Cummings lines up the smart Magic Millions winner which returned in style last time out.

The classy three-year-old put away a handy field at Caulfield by over a length and she is franking her two-year-old form from last season.

The winner of three from eight will go over the $1.5 million barrier with a win here and we wouldn’t put it past her.

Deprive is riding a lengthy winning streak and he had to fight with everything he had last time out.

The Cummings-trained gelding has rattled off five consecutive wins to take his record to seven wins and two placings from 10 starts.

That’s a real professional record and it would take a brave punter to back against him here.

Looks well placed from barrier three and he could make it six on the trot.

Eduardo runs well fresh up with two starts for a win and a placing. The six-year-old has been in the money in seven of his eight starts.

He’s a consistent gelding which ran third at Group 1 level last campaign and it’s tough to overlook that form.

He loves using the rail to his advantage and drawing barrier one is going to see him ride the pace and kick strongly.

That was a nice fresh up effort last start and he should build on that form throughout the spring season.

The Lindsay Park-trained seven-year-old has a good second-up record of four starts for four placings and punters are getting nice each-way odds.

This track isn’t his best but he’s more than capable of beating this field.

Punters have done their dough many times with Snitzepeg, but we’re giving him one more chance.

The Williams-trained five-year-old is a five-time winner and has won over $400,000 in prize money.

That’s a better career than most and dropping to 54kg with Dean Yendall in the saddle is a big help.

Likely to be at nice odds and he could be worth backing.