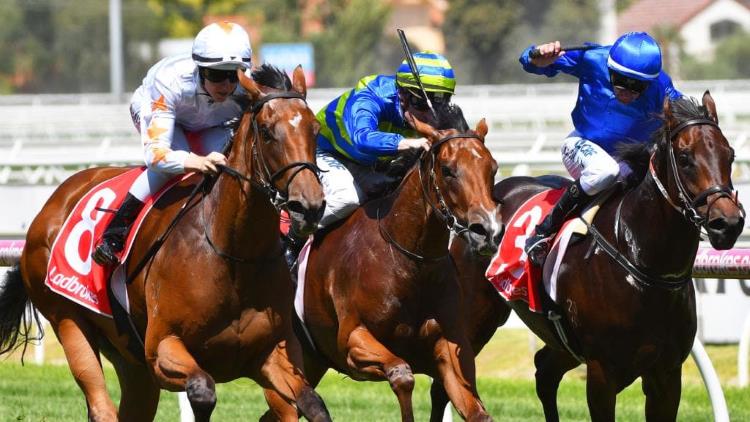 The Newmarket Handicap has attracted a field of quality sprinters and it could be the most even edition in some time.

A field of 13 lines up for the Group 1 prize and it’s the three-year-old runners that dominate the market. We have our best bet, best each way, and best roughie for the big race at Flemington this Saturday.

Our best bets for Newmarket Handicap

It was a superb win down the Flemington straight at Group 1 level last start. The four-year-old exceeded expectations when beating a quality field by a length.

He paid $20 on that occasion and is much shorter in the market for this race, but he represents good value once again. Include him in selections as he’s unbeaten in all three starts at Flemington.

The four-year-old was terrific in running second behind Pippie last start and he was the only runner making ground from the back. It was an on-pace bias, so coming from well back on the turn was a big performance.

He is a past winner second-up and punters are getting double-figure odds, so he’s well worth including at those odds.

Team McEvoy lines up the five-year-old gelding that is a seven-time winner, but isn’t racing well enough to be considered.

He has yet to run a win or placing in two starts at Flemington, so we’re putting him to the side for this run.

He’s an eight-race winner that deserves some respect. The Scott Brunton-trained son of Dundeel didn’t fire at Rosehill last start but he has been given time to mature.

His trial win at Hobart was good and the three-length win should hold him in good stead for this race. Drawing barrier 13 down the straight shouldn’t decrease his chances of winning.

Bivouac was a touch disappointing at Group 1 level last start but the race wasn’t run to suit. He got back and was being bumped around, so his confidence took a hit.

However, he’s a five-time winner and is highly talented at his best. He was good enough to finish second behind Exceedance in November and that form is a good guide for this race.

Exceedance is a Group 1 winner that takes on the older horses for the first time. He looks a natural stallion in the making and he’ll likely head to stud later this year.

He was a booming winner down the straight last year, but we think he might need a run under his belt this preparation. He’s a big lad and he might need the added fitness. However, he’s classy so don’t leave him out of selections.

He didn’t cope with the rise in class last start but he did make solid ground late. The seven-time winner could be better suited to 1400m now, so he could struggle to beat these talented sprinters.

Carrying 53kg is going to help his cause and he enjoys racing at Flemington. $20 is a good price if you’re keen on him.

He’s not up to this level and he’ll likely be off his feet from the outset. He hasn’t won for a while now and to suggest it will come at this level is a stretch.

Mike Moroney is working wonders with his team this season, but we’re not sure Tofane is good enough to win. She owns four wins from 10 starts, but most of those have come against much easier opposition.

She did notch a win over Pippie when scoring last November, so consider based on that.

We gave Trope a chance fresh up but he showed us very little. Therefore, we can’t tip him with any confidence this week.

The four-year-old owns ability, but he has won only one of his eight career starts. That’s not a good enough record to recommend.

It’s hard not to love Gaby after what she has shown throughout her career. The three-year-old filly finished third behind Gytrash last start and it was a good effort on the worse side of the straight.

She will likely stay along the inside from barrier four and having Craig Williams ride with only 52.5kg on her back is a bonus.

We love the odds and she goes on top.

Banquo looks best suited over slightly longer distances, so we’d be surprised if he fought out the finish.

The Danny O’Brien-trained runner gets in with only 51kg and that can’t be overlooked. However, we would want $41 to entertain his chances.

She’s a quality filly but she can be hard to follow. Her run for fourth fresh up was only fair and she will need to improve a couple of lengths to take this out.

Having a light weight does help her chances and it wouldn’t be a shock to see her winning.