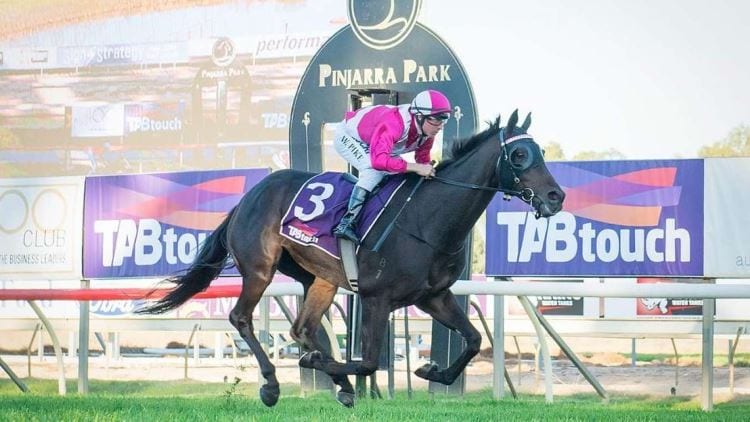 We have expert betting tips for the card this Saturday at Pinjarra that features 10 quality betting races.

It’s a big meeting at Pinjarra, which includes the Magic Millions 2YO Classic and 3YO Trophy.

Punters are getting each-way odds throughout the day and we have our best bets available.

The four-year-old mare has five placings from nine starts and she finished off stoutly for second last time out.

She has been threatening to break through for some time now and despite drawing barrier 14, she should be right in the thick of the action.

It’s about time Roo jumped into the winners’ circle.

Coming Around has rattled off three consecutive wins and William Pike sticks with him.

The four-year-old scored by just under a length last start and he’s good enough to rise through the grades.

Most of the money should be coming his way on race day.

Celebrity Queen is a talented three-year-old that showed her ability when in work last year.

She won on debut at Belmont by a half-length before taking on some tough types at Ascot.

Her trial win to prepare for this run was top quality and it’s another good ride for William Pike, who could lift her over the line.

Goku could become super saiyan and win another race. The four-year-old was victorious when scoring at Pinjarra two starts back before running second last start.

He was only 1.5 lengths behind the winner and he didn’t get every chance in the run. He should here from barrier two, so consider as a top winning chance.

Team Williams lines up the four-year-old which has yet to finish worse than second from six starts.

The daughter of Rogano has three wins and three second placings, which is tough to overlook in this race.

She owns a very good turn-of-foot and having William Pike in the saddle is a bonus.

Five-year-old gelding Free Trade is a six-time winner from 12 starts and that’s a good record to date.

He also boasts six placings and his consistency is why many punters will come for him on race day.

Luck will be needed from barrier nine but he owns more ability than most in this field.

Punters need to muscle up and take the short odds on offer, but he should be winning this race.

The two-year-old won by 1.8 lengths on debut at Ascot before doubling down and winning by 4.8 lengths last time out.

He led throughout the race and he owns quality cruising speed. That’s going to make him tough to beat in this race.

Money does matter for this runner, which has treated punters well over the course of his career.

The three-year-old has four wins from seven starts, including his last three. His most recent win came at Bunbury where he showed good barrier speed.

If he can find the front from barrier seven, he’ll be tough to hold out.

Morning Song has found her best form after storming home to win at Ascot last time out.

The Williams-trained daughter of Bernardini is a four-time winner from 14 starts and she could easily win again.

It’s another hot ride for William Pike and he’ll need to produce a good ride from barrier 15.

Sweet Dreamin’ has won three consecutive races and the gelding could win again.

The son of Dream Ahead has won all three races by narrow margins and it’s good to see William Pike retain the ride.

Getting an inside draw is ideal and we’re expecting another tough effort.