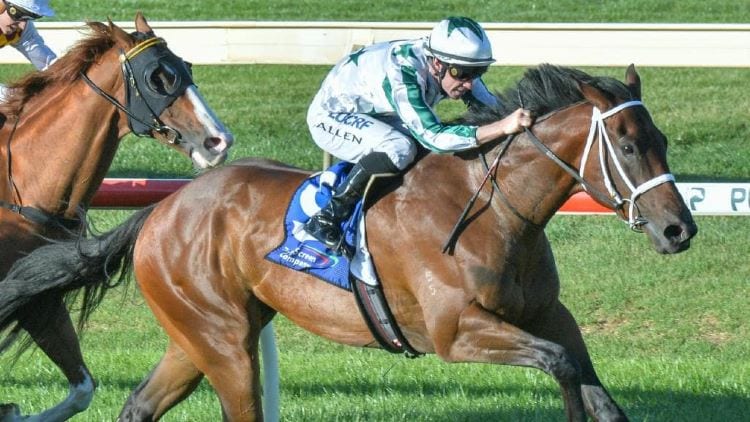 Good even fields throughout the day at Sandown and punters are getting premium value.

The Hawkes team usually produces some nice types on debut and Holster could be added to that list.

He’s a three-year-old gelding which is very well bred and cost a decent sum of money at the sales.

That doesn’t equal success on the track, but he’s an exciting type and punters are getting good odds with bookmakers.

Liam Howley trains the imported son of Frankel which ran third at Sandown in his Australian debut last month.

The four-year-old was impressive when winning his maiden at Leopardstown last year but hasn’t done much racing since.

He should only improve with more racing under his belt and punters are getting good odds considering the risk.

The Matthew Brown-trained runner is has found good form with three wins from his last five starts.

One of those came fresh up at Sandown where he scored by a length and he should be able to rise through the grades now.

He has taken on some tough fields throughout his career, including running sixth behind Mr Quickie at Mornington.

Respect here at the each-way odds.

Chicago Bull is an interesting runner and we are taking a risk with him. The colt has had two starts for one placing, but takes on a BM70 field here.

There was massive hype on debut when finishing third at Flemington and he didn’t handle the wet in the Silver Slipper in February.

Owns talent and gets the inside draw, so we wouldn’t be surprised to see him fighting out the finish.

Tony McEvoy lines up the unbeaten mare which could make it three-from-three to start her career.

The four-year-old scored by a half-length on debut at Bendigo before winning by two lengths in an easier field at Gawler.

Drawn wide here but it meets an even field and could take advantage of that.

Anthony Freedman lines up the debut winner which could remain unbeaten with a nice effort here.

The gelding by Pierro was a good winner on debut at Wangaratta when scoring by 4.5 lengths. That form has stacked up beautifully since with Condo’s Express winning in the city.

A recent trial was only fair but he wasn’t asked to do much and there is solid money coming for him. That’s a good sign.

Jumbo Ozaki has been a tough horse to follow. He was scratched due to the wet track last week so he’ll be hoping the conditions don’t get any worse here.

There’s no doubting his talent after scoring wins at his first two starts. He has been a little expensive since but at no fault of his own.

Rox The Castle will be tough to beat but with the 5kg pull in the weights, that could swing it in favour of Jumbo.

Tony Nicconi has been facing tough fields throughout his career and should enjoy the drop in grade here.

The Lindsay Park-trained gelding ran nicely for fourth behind Pippie last start in April and Pippie has since won two stakes races in Melbourne.

That form bodes well for midweek racing and it should be going close.