Sha Tin features 10 races this Sunday and we have our best value bets for every race.

The experienced eight-year-old is mixing his form but he typically runs well second-up.

He’s a son of Danzero which has posted three wins and 12 placings from 45 starts. He doesn’t have a great field to beat here, so he could provide punters with value.

Above is always worth following and his record of three wins and four placings is credit to that.

The son of Tavistock scored back-to-back wins last year, and he has run well since. His most recent run came at Sha Tin where he ran second behind London Hall.

It’s good form for this race and we’re confident of his chances.

Charlie Shum lines up the four-year-old gelding that has made a good start to his career. He has one win and three second placings from five starts, so the class is there.

He finished second at Sha Tin last start and he looks a good chance of going one better. It’s an easier field and running with only 53.5kg makes it likely.

Joao Moreira riding will drive down the odds, but put him on top.

Knocking on the door of a win is Incanto Prepared, which has placed at his last two starts. The John Size-trained gelding is getting close to posting his first win.

His career didn’t start off overly well but his form this year has been much better. He’s becoming more mature and it’s another good ride for Moreira.

Expect him to be fighting out the finish.

Frankie Lor lines up the improving gelding which has placed in all three starts to date. The son of Per Incanto went close at Sha Tin earlier this month and a repeat effort takes him close.

Seeing Joao Moreira stick with him for every start in his career is a great sign. He’ll likely be on board throughout his career, and he could break maiden ranks here.

Telecom Rocket could fire up and score his second win this season. The Tsui-trained runner won at Sha Tin in December and hasn’t been far away since.

The son of Tavistock was a touch unlucky last start when finishing 3.5 lengths behind the winner. He needs luck again from barrier 12, but he’s worth sticking with.

Manfred Man lines up the talented gelding that has had four starts for a win and three placings.

He’s a quality three-year-old that could rise through the grades in Hong Kong. He was only a half-length behind the winner last start as the odds-on favourite.

Prior to that, he defeated Fantasy, so the earlier race should be a good form guide.

Hardly Swears was only 1.8 lengths behind the winner last start, so it could pay to forgive that effort.

He’s a three-time winner from six starts, so the class is there, and he shouldn’t take long to get back to winning form.

Punters could get each-way odds.

Monica is extremely consistent and he could continue with his good form. The Moore-trained six-year-old won by 1.3 lengths two back before placing last start.

He hasn’t run worse than fourth from his last nine starts, and that’s easily good enough form to warrant attention in this race.

Perfect Match is shooting for three consecutive wins and his overall record is impressive. He owns six wins and three placings from only 11 starts.

That’s hot form heading into this race and we wouldn’t be surprised to see his odds firm throughout the week.

Zac Purton rides and he currently leads the premiership. 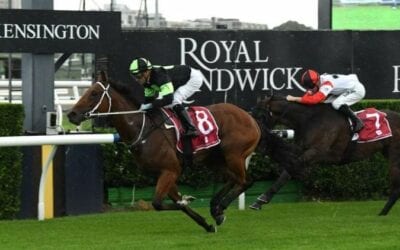