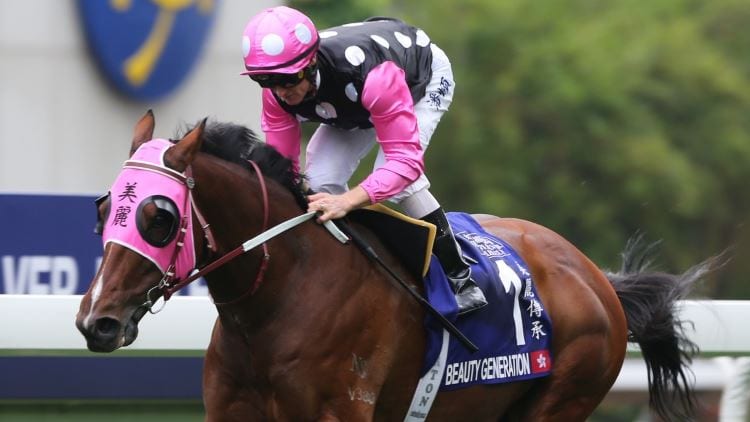 We’re hoping the political unrest doesn’t influence this meeting as there are some quality races on the card. The card includes the Jockey Club Mile, where Beauty Generation is in action.

We have found the best value tips across all 10 races.

Joao Moreira rides the likely favourite and he should prove tough to beat. The Fownes-trained runner finished second fresh up and hasn’t been far away since.

He was only 2.5 lengths from the winner at Sha Tin last start and changing rider from Neil Callan could help his cause.

The Australian-bred four-year-old could give punters something to cheer about in the first.

He scored a good win to close last season and although yet to win this time in, he has every chance here.

The son of Makfi is looking to rebound after running last at Happy Valley but he didn’t get much luck from a wide barrier draw.

His form prior included a second placing on this track and he’s much-better suited here.

Be Ready looked the goods when last in work, which included him winning three of his last four starts.

The Frankie Lor-trained runner is fresh up having not run since May but the time off could have helped him mature nicely.

He has attracted the interest of Hugh Bowman, who didn’t ride the former Australia back home, but could score here.

This will be his first run in Hong Kong and he could make it a winning one.

Tony Millard lines up the five-year-old gelding which won fresh up and backed that up with another top effort.

The son of Savabeel scored by 1.3 lengths at Sha Tin to kick off this season and wasn’t far behind King’s Race last start.

That form looks good for this and he should prove tough to beat with Karis Teetan jumping from a friendly barrier of four.

Gift of Lifeline is finding it hard to win his second race, but he’s going close and could represent value here.

The Millard-trained son of Pierro was fifth last start but just over a length from the winner Craig’s Star. There’s little wrong with that form coming into this.

He scored his maiden win in March and his form at Sha Tin since has been very good. Chance at odds.

Beauty Generation was considered the Winx of Hong Kong racing, but that bubble was burst last start.

However, we can’t deny his class and he’s at short odds to rebound for a victory in the Jockey Club Mile this Sunday.

He drops nicely in weight to 58kg and that should make a big difference after carrying 60.5kg last time out.

Quality is with Exultant, which was third fresh up last start and he’s only going to improve with the run.

The Tony Cruz-trained five-year-old is the class act of this field with nine wins from 23 starts and he’s going to be awfully tough to get past.

He has the December features on his mind and a win here is likely if jockey Zac Purton gives him a soft run throughout.

That should be achievable from barrier three.

Aethero is a big danger down in the weights at 51.5kg and he will attract plenty of attention with bookmakers.

The John Moore-trained three-year-old gives away some experience in this field but he was dominant when scoring by 2.5 lengths last start.

It’s tough to overlook his record of four wins from five starts and he could be a sprinting superstar following this race.

The four-year-old was a touch disappointing when sixth last start but we’re expecting quick improvement.

He’s a son of Declaration of War, so he was always going to need the run. His form last preparation included three wins from four starts and that’s tough to overlook.

Tricky draw from barrier 12 but consider on an each-way basis.

Tianchi Monster is knocking on the door of a win after consecutive second placings.

The son of Shocking went within a half-length at Sha Tin last start and he has always run well on this track.

He owns three wins on this track and that form should shine through in the final race on the card.