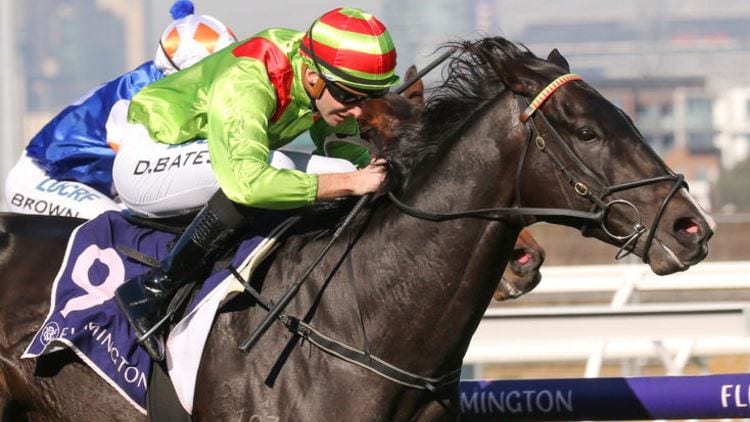 Group 1 racing continues from Melbourne with the 2019 Sir Rupert Clarke Stakes this Saturday.

A wide-open field of 15 runners have been accepted to run and it’s shaping up to be another quality race.

Punters are getting a big field and lovely odds to bet on. We look at the best bets for the 2019 Sir Rupert Clarke Stakes.

Our best bets for the Sir Rupert Clarke Stakes 2019

James Cummings lines up the imported runner which finished off nicely for third last start and he could build to a good run here.

Hasn’t won at his last four starts and drawing barrier 13 hurts, but he could run well at odds and be in the thick of the finish.

Retired last season and has come back for another. Probably shouldn’t be racing at this level as a nine-year-old.

Didn’t make much ground last start so we can’t have him in selections.

Owns plenty of talent as shown last season and although disappointing since, he owns winning claims here.

Trainer Tony McEvoy is confident of a good run and with a good run from barrier nine, he could finish over the top of them.

A four-year-old gelding, Madison County is a four-time winner across the Tasman and that includes a Group 1 win in the Levin Classic.

Gets a good run from the barrier and his best form would take him close.

There was a time when we wouldn’t have dreamed about backing So Si Bon at Group 1 level, but he’s in career-best form.

The Lindsay Park-trained six-year-old won the Group 3 Aurie’s Star fresh up at Flemington before running second behind Scales of Justice in the Group 1 Memsie.

Good time to back So Si Bon as his confidence is up and it typically doesn’t last long.

Owns good tactical pace but that was a disappointing effort last time out and he would need a turnaround in confidence.

Wants to find the rail and will have to do some work from out wide.

Has been backed and beaten since arriving in Australia and he’s showing that European sprinting form isn’t up to standard.

Better run at The Valley last start but that’s not Group 1 form and he could struggle to stay with them here.

Too short in the betting.

Fair effort for fifth fresh up at Moonee Valley and he does own a good turn-of-foot.

That has won him 11 of his 31 career starts but winning at this level is another kettle of fish. Still, he owns winning claims with the right run in transit.

Sydney-based runner which has a consistent record of seven wins from 11 starts but winning at this level will be tough.

Doesn’t get in all that well off on the weights either, so the five-year-old could struggle to show his usual acceleration here.

Former American runner which made a good impression when first in Australia, but hasn’t done much since.

Has won second-up in the past but this looks too difficult and the odds are reflective of that.

A little short in the market for our liking. Has won six from 35 starts and most of those have come in much weaker races.

Went forward and punctured last start, so that doesn’t give us much confidence.

Proven performer at the top level, having won five of her 14 starts for over $750,000 in stake money.

The four-year-old mare was making good ground when sixth in the Cockram Stakes behind Pippie and although that’s not Group 1 form, it’s solid.

She has always been a good performer in the big races so don’t sleep on her chances.

Has a good record of eight wins from 20 starts and he owns good enough tactical speed to be a factor in this.

If he settles on the pace, he could give a good kick and go close. However, he’ll need to produce a career-best performance to take this out.

Rising star which ran sixth in the Memsie Stakes but he carried 59kg on that occasion and drops to 52kg here.

That’s a massive difference and that’s why he has been backed off the map in early markets.

The seven-time winner from 12 starts owns great barrier speed and if he finds a soft lead, it’s all over, they won’t catch him.

More than capable type which has finished in the first two in seven of his nine career starts.

He’s going to win some nice races in his career and carrying 52kg brings him right into contention.

Another runner that goes forward, so the pressure up front will be interesting.