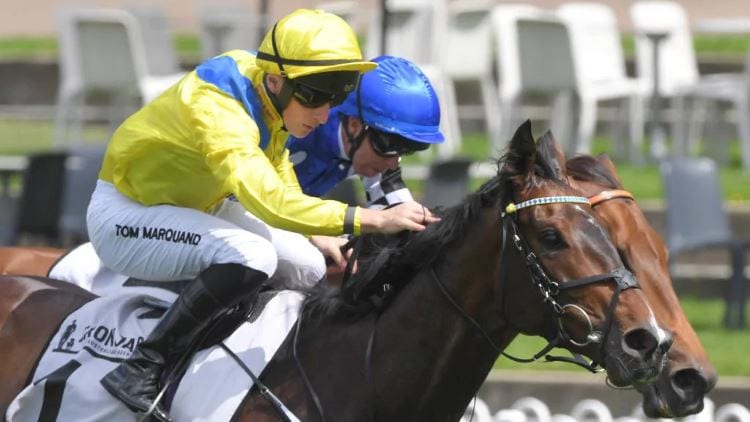 The 3200m Sydney Cup runs this Saturday on Day 2 of The Championships at Randwick.

Some of the world’s best stayers do battle for the Group 1 prize and we have our best bets for the big race.

Our best bets for Sydney Cup

Despite running 23rd in the Melbourne Cup, Mustajeer has rebounded with style this season.

The Kris Lees-trained gelding won fresh up at Rosehill before running second behind Master of Wine and Verry Elleegant.

He gets over the ideal journey now and we’re confident of his chances.

It was a tough win last start but the form stacks up beautifully for this race. The European runner held off Mugatoo at Rosehill and it was an impressive victory.

He’s a five-year-old that’s bred to be tough and with six wins from 11 starts, he’s only just getting to his prime.

In-form jockey Tom Marquand rides and with 56kg on the back, he should go close.

He has shown ability in the past and he can ride the speed, but he could be a tired horse at the end of the two miles.

Money has come for Raheem House after his quality win at Randwick last Saturday.

He enjoyed the wet conditions and although his form prior wasn’t anything to write home about, he has improved at the right time.

Conditions suit and we wouldn’t be putting a line through his chances.

It was an improving run when fourth last week and he looks ready to strike. The seven-year-old doesn’t win often but he enjoys this track.

He owns a placing over the two miles and with only 53.5kg on his back, he’s worth entertaining at odds.

The Kiwi hasn’t been running up to the best of his ability this time in, but respect his top-end ability.

Murray Baker and Andrew Forsman are coming off a win in the Derby, so they could well grab another Group 1 feature.

The four-year-old was good enough to run in the Melbourne Cup and that shouldn’t be forgotten.

Azuro loves running in the wet, so if the track remains heavy, expect his odds to firm.

The former European owns a win and a placing from two starts on a heavy track. He’s also a three-time winner over this distance, so it could pay to overlook his recent form.

Yogi continues to miss the jump but that shouldn’t matter over this distance. He’s a past winner at 3200m and carrying 52.5kg helps.

However, his form this season has been awful and punters will need to take him on trust.

The four-year-old had no luck last start and still battled away for fifth behind Raheem House.

We’re prepared to give him another chance and he should get better luck. Carrying 52.5kg is ideal and he’s capable of causing an upset.

The seven-year-old went to New Zealand and ran fourth in the Auckland Cup behind Roger That.

It was a solid performance but her best days are behind her. The $26 is a touch short of value.

An experience customer that owns only five wins from 43 starts. He would need to improve significantly to win at this level.

He’s a past winner second-up and although his two starts over this distance haven’t resulted in anything, the experience helps.

Kris Lees was mildly confident of his chances and he could be an upset chance at $41.

Corncrake is a former European that has looked good winning his last two starts.

He’s a four-year-old that could cause an upset with only 51kg on his back. The only worry is the distance, but it looks as though he’ll handle it.

Kathy O’Hara has a knack of winning races like this.