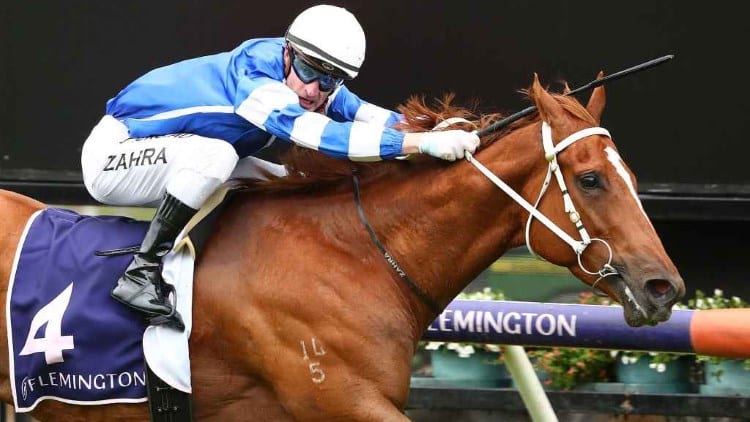 The Goodwood continues the Group 1 carnival in South Australia this Saturday and a talented field of sprinters lines up.

Big money is on offer and bookmakers have released an even betting field. We have our best bets for The Goodwood, which goes off at Morphettville at 4:25pm.

Our best bets for The Goodwood

Santa Ana Lane hasn’t been at his best this season and we’re not confident about his chances. He has won at Group 1 level on this track in the past, but he doesn’t have his usual turn-of-foot.

He is being respected with bookmakers so watch for any late moves.

The James Cummings-trained gelding is coming off a second placing behind Greyworm and that’s good form.

He looks well-placed for this race and John Allen is coming off a Group 1 win last week. It bodes well for a good run and he’s paying nice odds.

Gytrash was excellent when winning on this track last start and we thought he would be shorter in the betting.

The son of Lope de Vega is an eight-time winner and although drawing barrier 12 makes it harder, he has the class to overcome it.

She didn’t fire last time out but she’s better than that. The four-year-old has won 11 of her 23 starts and she has won over $6.2 million.

It’s tough to ignore that statistic and although she needs to hit back, punters are getting good odds.

Money is coming for Zoutori but he showed very little at Moonee Valley last start. He finished last of 11 runners and he’s not showing his form of old.

Punters are getting good odds but he’s facing a talented field and he might be left wanting in the straight.

Jungle Edge showed off his front-running credentials when winning last start. He had conditions to suit and he made the most of them.

However, it’s a much harder task here and he could struggle on the firm going. An inexperienced rider is in the saddle and that won’t help.

The Golden Eagle winner hasn’t won since but he did a good job to run second last start. However, drawing wide could rule him out.

Barrier 15 won’t do him any good and bookmakers are lengthening his odds. Respect his ability, but wait till his odds his double figures.

His chances would improve if some rain fell during the week. He’s coming off a tidy performance to score at Warrnambool but this is much harder.

He draws well and he’s a four-time winner at this distance, so don’t forget about him.

Behemoth is exactly that and he’s coming off a tidy showing behind Jungle Edge. He has more upside than most here and his experience on this track could help.

He has had six starts for a win and four second placings at Morphettville. It’s good form and he could rise to the challenge.

He’s a seven-time winner but most of that form has come against much easier opposition. He’s a past winner on this track and he wasn’t all that far away last start.

Punters are getting good odds and so they should.

The Blue Diamond winner is getting close to getting back to winning form. She finished second behind Bella Vella last start and that form could hold up well.

It has been a long time between drinks but she’s capable enough of taking out this race.

Xilong is a speedy type that is coming off a narrow win on this track. The McEvoy-trained filly owns five wins from nine starts and she loves drawing the inside barrier.

She’ll be able to use her good pace from that draw and carrying 53.5kg on her back only helps. $18 is a good price and she’s not without a chance.

Punters would be free of debt if this three-year-old got up at big odds. He was fair to the line last time out and carrying 53kg helps, but he’s unlikely to trouble them.

She opened at triple-figure odds and although she has been backed in, we’re expect a late drift.

The eight-time winner shouldn’t be getting close to them here.

The filly has had her chances to win multiple times this preparation but has come up short. Carrying 52kg helps but she shouldn’t be troubling them.