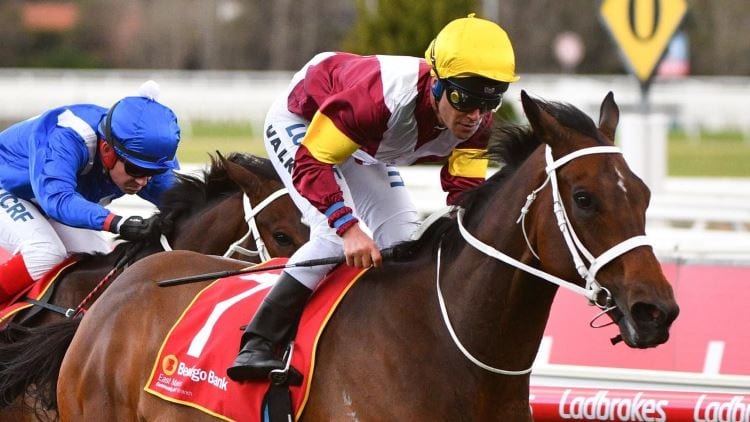 The Metropolitan goes hand-and-hand with the Epsom Handicap, except this race is for the stayers.

Many of these runners are looking for spots in the likes of the Caulfield Cup and Melbourne Cup, so it’s an important race.

17 of the best stayers will line up in Saturday’s feature 2400m race and we have our best bets for the race.

Our best bets for The Metropolitan 2019

Hasn’t shown much in two runs back from a spell but those came in unsuitable races.

This suits much better and although he’s out of form, that could change quickly.

$23 is a fair price with Hugh Bowman in the saddle.

Talented stayer which has won nine from 43 and has the experience to win at this level.

Scored a big win on this track in April and anything close to that form would see him being competitive here.

Chance at the odds.

Looks good on his day and the former European import has already scored back-to-back wins this campaign.

Drawn wide but that shouldn’t matter over this distance. Needs the right run in transit but we wouldn’t be ruling him out.

Imported runner which held its ground last time out and more will be expected now.

Firm in the betting at $12 and it could run as a single-figure chance.

Just needs to lift a half-length to take this out.

Creates its own luck out in front and he’s always tough to beat from the front.

The Waterhouse/Bott-trained runner has been steadily backed throughout the week and he comes into this with winning form.

His two-length win at Rosehill was a good form guide for this, so include him on your ticket.

Has been known to be a wet tracker but was good enough to win on a good track at Wyong two starts back.

The six-year-old has won four of his last five starts and that form shouldn’t be overlooked for The Metropolitan.

Worth including at the odds.

We all love Big Duke and he knows how to turn up in the big games, but his best days might be behind him.

He’s a lovable stayer which will enjoy carrying 54kg and that could help turn his form around.

Good enough to win four consecutive races in Perth but has disappointed since arriving in the Waller stables.

Prepared to give him another chance and there has been good betting support.

Carries only 54kg and that helps.

Big race winner which is horribly out of form. Struggling to beat runners home and the 11-time winner is well past his best.

Only fair last start but we’re prepared to put that down to second-up syndrome.

The Waller-trained stayer which has loads of ability and every chance of winning at juicy odds.

The Kiwi runner has been ticking over nicely for this run and there was plenty to like about his fifth last time out.

He is proven at the top level in Sydney and we’re surprised that there’s no money coming for him.

Bookmakers have let his price go from $16 to $23, but we’ll take the better odds.

That was an impressive win at Caulfield last time out and he’s capable of kicking on with it now.

Another Waller-trained runner, Brimham Rocks is more than capable of winning at this level and he’s due a major victory.

Looks set for a cups campaign and winning this would hold him in good stead.

Really kicked nicely to score last start and he puts himself on the speed and right in the race.

He’s only a four-year-old, so he has much more to come and dropping to 52.5kg is going to help significantly.

Money coming for the import and we’re not surprised.

Loomed to win last start but came to the end of her run late in the race. However, it was still a good effort and she could take this.

Drops to 50kg and if she can get a good run behind the speed, she could pull out wide and finish off best.

Was an Oaks filly last season and she is talented at best, but we can’t take the $6.50 on offer.

She isn’t proven against the tough stayers and that will count against her here. Also, the lack of recent racing is another negative.

Didn’t fire last start and it’s tough to back him confidently on that performance.

Kiwi runner which went well two back and only battled last start. Will see out the distance so it could run a good race and provide punters with value.

Handles all conditions and there has been money come.