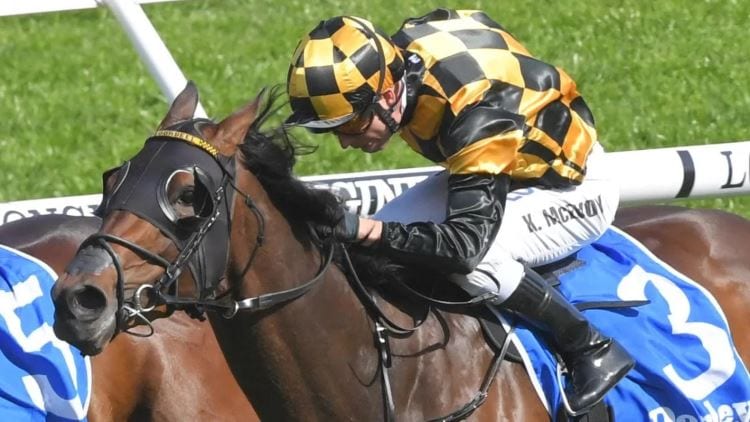 It’s another rematch between Funstar vs. Probabeel in the 2020 Vinery Stud Stakes this Saturday at Rosehill.

Of course, there’s more than just two horses in the field. However, this is their third meeting this season and it’s 1/1.

Will there be an upset? Or will the two favourites battle it out again? We have our best bets for the 2020 Vinery Stud Stakes.

Funstar got the better of Probabeel last start but that came in wet conditions, which suits Funstar.

The Waller-trained filly is classy at best, having not finished worse than second from seven starts. She deserves to be well-backed, but $1.90 is very thin.

We can’t take those odds, but we’re expecting them to remain steady throughout the week.

Punters are getting good odds for Probabeel, which scored three consecutive wins before running second last time out behind Funstar.

She’s better suited to improved track conditions, so the track should be perfect on Saturday. The winner of six from 13 had everything go against her at Rosehill, but she showed what she can do at Randwick.

We’re giving the edge to Probabeel in the third showdown.

The Snowden-trained runner looked promising when she first hit the track, but her form since has been only fair.

She finished fourth at Kembla Grange last time out, and was only a half-length behind them. However, this is a much harder field and a place chance seems her best result.

We put Fascino in as the best roughie because she has plenty of upside. The Maher/Eustace-trained filly made up a stack of ground for third last start at Flemington.

That came behind talented filly Rubisaki, and it should prove to be a good form guide for the rest of the season.

She scored two wins last campaign and having Tom Marquand in the saddle is ideal.

Punters should always respect runners from the James Cummings stable. The three-year-old owns five wins from 11 starts, which is a good record to date.

Her most recent run was a win at Kembla Grange, and she hit the line nicely. We wouldn’t be ruling her out on an each-way basis.

The former Kiwi has an explosive turn-of-foot when she gets the right run in transit. It’s a big step up in class here, but if they go quickly up front, she could finish off stylishly.

She’s a three-time winner that gets a good run from barrier five, and Tommy Berry remains in the saddle.

Game or Thorns scored an unlikely victory two starts back at Newcastle. She didn’t follow it up at Kembla Grange, but she didn’t get much luck either.

Drawing barrier three helps her chances and loyal fans are getting good odds.

Nudge showed little at Kembla Grange last start and she doesn’t appear to be a Group 1 winner in the making.

Drawing the inside barrier helps her situation, but she hasn’t shown enough form to date to warrant attention.

Punters shouldn’t overlook Shout the Bar, which finished only a nose behind Asiago last start at Kembla.

The Waterhouse/Bott-trained runner scored wins at her first two starts, and she got unlucky not to be unbeaten.

It’s a huge rise in class, hence the $23, but we wouldn’t be surprised to see her run well.

She hasn’t been running well enough and that’s why she’s paying triple-figure odds. Bigger upsets have happened, but it’s an unlikely scenario.

The daughter of Declaration of War gets a good draw, but she’s unlikely to keep up with most of these runners.

She’s an experienced runner that has 12 starts for three wins, but all have come in the country. She won’t be winning this race.

It wasn’t a good run last start and it’s hard to see that form stacking up well enough for this race.