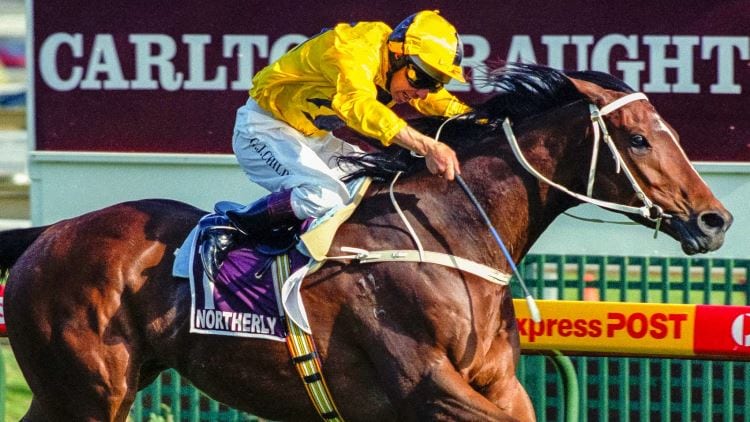 Northerly, aka ‘The Fighting Tiger’, was an enigmatic thoroughbred that won back-to-back Cox Plates in 2001 and 2002.

He was a champion middle-distance thoroughbred that had a mind of his own, much to his detriment on many occasions. However, he took over from Sunline as the champion thoroughbred in the mid 2000’s.

Northerly didn’t race as a two-year-old and made his debut on 29 March 2000. He finished third at Ascot but won the Listed Aquanita Stakes at his following start.

It was to be his final race that race and after seven months off the scene, he returned to run fourth at Ascot. He backed that up with three consecutive wins, which culminated with the Group 1 Railway Stakes over 1600m.

After a second placing in the Australia Day Stakes, he set a course record in the Carlyon Cup, which stands to this day at 1:35.1.

His final run during his four-year-old season came in the Australian Cup, where he scored another incredible victory. Carrying 58kg with Greg Childs in the saddle, he set a course record. It was later broken by Makybe Diva in 2005.

Northerly’s five-year-old season was to be a busy one. He had 10 runs, which included six wins. He won three consecutive Group 1 races in the Underwood Stakes, Yalumba Stakes and Cox Plate.

The 2001 Cox Plate was a huge battle against Sunline, who had won the previous two Cox Plates and was chasing history at the time. Northerly had the better run and got the better of Sunline over the concluding stages.

An even lengthier campaign was set as a six-year-old, which included 14 runs. Of those 14 runs, four came at Group 1 level. Most notably, a win in the 2002 Caulfield Cup was followed up with his second consecutive win in the Cox Plate.

It was a controversial finish in the Cox Plate after Northerly run in significantly over the concluding stages. It forced Sunline to overreact and came out on another horse, resulting in a three-horse incident. Steward’s amazingly cleared Northerly of any wrongdoing, despite clear video evidence.

Northerly added a second Australian Cup to his record later that season and he also ran second in The BMW at Rosehill.

He didn’t race as a seven-year-old after suffering a torn tendon. He returned in 2004 with three unplaced runs before being retired.

The people behind Northerly

Northerly was trained by Fred Kersley in Western Australia, who was able to train Northerly to the minute.

On many occasions it looked as though Northerly was beaten, but he fought back incredibly to win many of his races.

He was admired by many racing fans and the ownership group of Mr and Mrs Duncan and Mrs J Kersley enjoyed his storied career immensely.

He had many jockeys throughout his career, which consisted of Patrick Carbery, Damien Oliver, Greg Childs and Patrick Payne.

Oliver did most of the riding in Melbourne before Greg Childs took over in 2002. He stepped down as his rider after partnering Sunline in her final Cox Plate in 2002.

Patrick Payne took over immediately and won the 2002 Cox Plate.

Northerly didn’t travel outside of Australia but was awarded Champion Racehorse of the Year in 2003.

He ended his career with a timeform rating of 129 and nine Group 1 wins in the bag.

Northerly has since had a race named after him (Northerly Stakes) and has since been inducted into the Australian Racing Hall of Fame.

His career earnings were just short of $10 million.