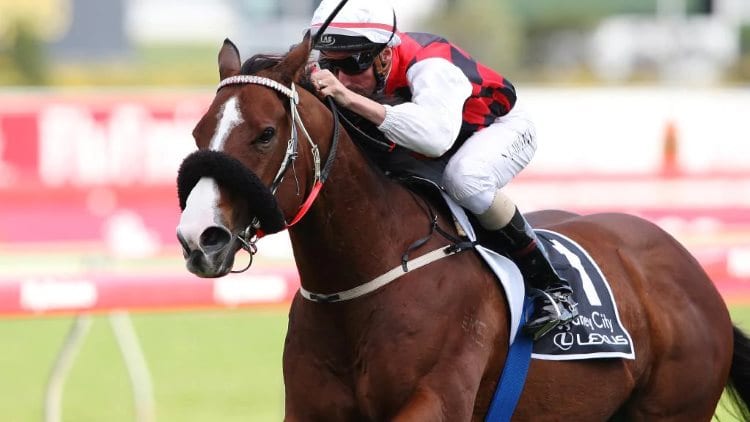 The story behind Takeover Target is one for the ages. He was purchased and trained by a former taxi driver, who would be taken on the ride of a lifetime with his prized possession.

An extremely cheap purchase of $1,250, the son of Celtic Swing would go on to win over $6 million for trainer and owner Joe Janiak, who became a global superstar.

A globetrotting thoroughbred, Takeover Target won in four countries and remains one of Australia’s most successful racehorses.

Starting off with humble beginnings, the career of Takeover Target started at Queanbeyan where he won over 1200m. He was a four-year-old when his career started, due to injury problems for the first two years of his career.

It’s what makes his story even better; that he was able to overcome leg and joint problems when he was still in growing stages. Despite these problems, he won all six starts as a four-year-old, including wins in the Listed Pacesetter Stakes and Listed Ramornie Handicap.

His first taste at the top level came when fresh up in 2004. He hadn’t raced for three months but returned to win the Group 1 Salinger Stakes at Flemington. His next five runs didn’t result in any success, with placings coming in the Doomben 10,000 and Carlton Draught Stakes.

Janiak didn’t panic with his quality sprinter and lined him up in the Group 3 Summer Stakes, which he scored at Doomben. It was the first of three straight victories that culminated with his second Group 1 in the Lightning Stakes.

Another major race was added that season when Takeover Target won the Newmarket Handicap down the Flemington straight.

Despite his success in Australia, Janiak wanted the thrill of racing overseas. The Group 2 King’s Stand Stakes, which is now raced at Group 1 level, was the primary target. He carried 61kg to victory at Royal Ascot in what was a momentous occasion for all involved.

Janiak backed him up in the Golden Jubilee Stakes four days later where he finished fourth behind Les Arcs. Three weeks later, Takeover Target finished seventh in the July Cup behind Les Arcs once again.

Not wanting to return to Australia, Takeover Target was given two runs in Japan. He finished second in the Group 2 Centaur Stakes before winning the Group 1 Sprinters Stakes against a hot local field.

Satisfied with his overseas achievements, Janiak returned home with Takeover Target for more sprint features. He won the Doomben 10,000 in May 2007 before returning to Europe where he finished fourth in the King’s Stand and second in the Golden Jubilee.

His eight-year-old season started with back-to-back wins at Randwick before running third behind Apache Cat in the T.J. Smith Stakes. Under a month later, Takeover Target was off to Singapore for the KrisFlyer International Sprint.

It would be Takeover Target’s fourth overseas win, beating Magnus in a quick 1200m time. Following his run in Singapore, he was back at Royal Ascot for the King’s Stand/Golden Jubilee double. He finished second in the King’s Stand and fourth in the Jubilee.

He returned home as a nine-year-old but that didn’t slow him down. He rattled off four consecutive wins, including the Winterbottom Stakes, T.J. Smith Stakes and The Goodwood.

One last overseas trip resulted in two disappointing finishes in Singapore and Newmarket. He suffered a leg injury and although Janiak hinted at a return, he retired in October 2010.

The team behind Takeover Target

He was trained by Joe Janiak, who was very much a part-time trainer. Janiak trained a few horses throughout his career with little success until Takeover Target came along.

His rags-to-riches story made headlines around the world his association with Jay Ford was also well-documented.

Ford rode Takeover Target in all but two starts (The Age Classic and the T.J. Smith Stakes).

Takeover Target is one of only a few thoroughbreds to win Group 1 races in four different countries. His record of 21 wins from 41 starts would have no doubt been better had he stayed in Australia.

However, his globetrotting exploits added to his praise. He was the World’s Highest Rated Sprinter in 2006 and he won the Australian Champion International Performer in 2006, 2007, and 2008.

Takeover Target was inducted into the Australian Racing Fall of Fame in 2012.

He won eight Group 1 races, but many of his Group 2 victories have now become Group 1 races, such as the King’s Stand Stakes and Winterbottom Stakes.

Owners: Joe and be Janiak 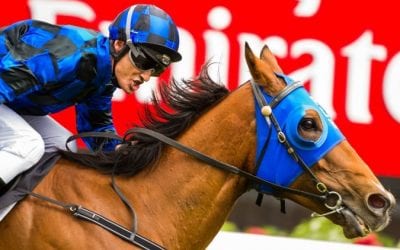 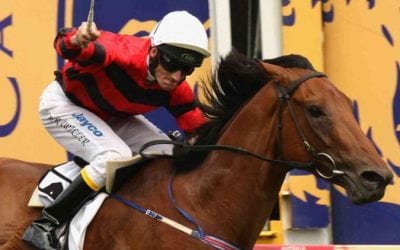